Investors in the streaming pioneer Netflix (NASDAQ: NFLX ) have seen robust returns in 2021. Year-to-date, NFLX stock has returned 17.5%. By comparison, the Dow Jones U.S. Broadcasting & Entertainment Index is down 10.2%. 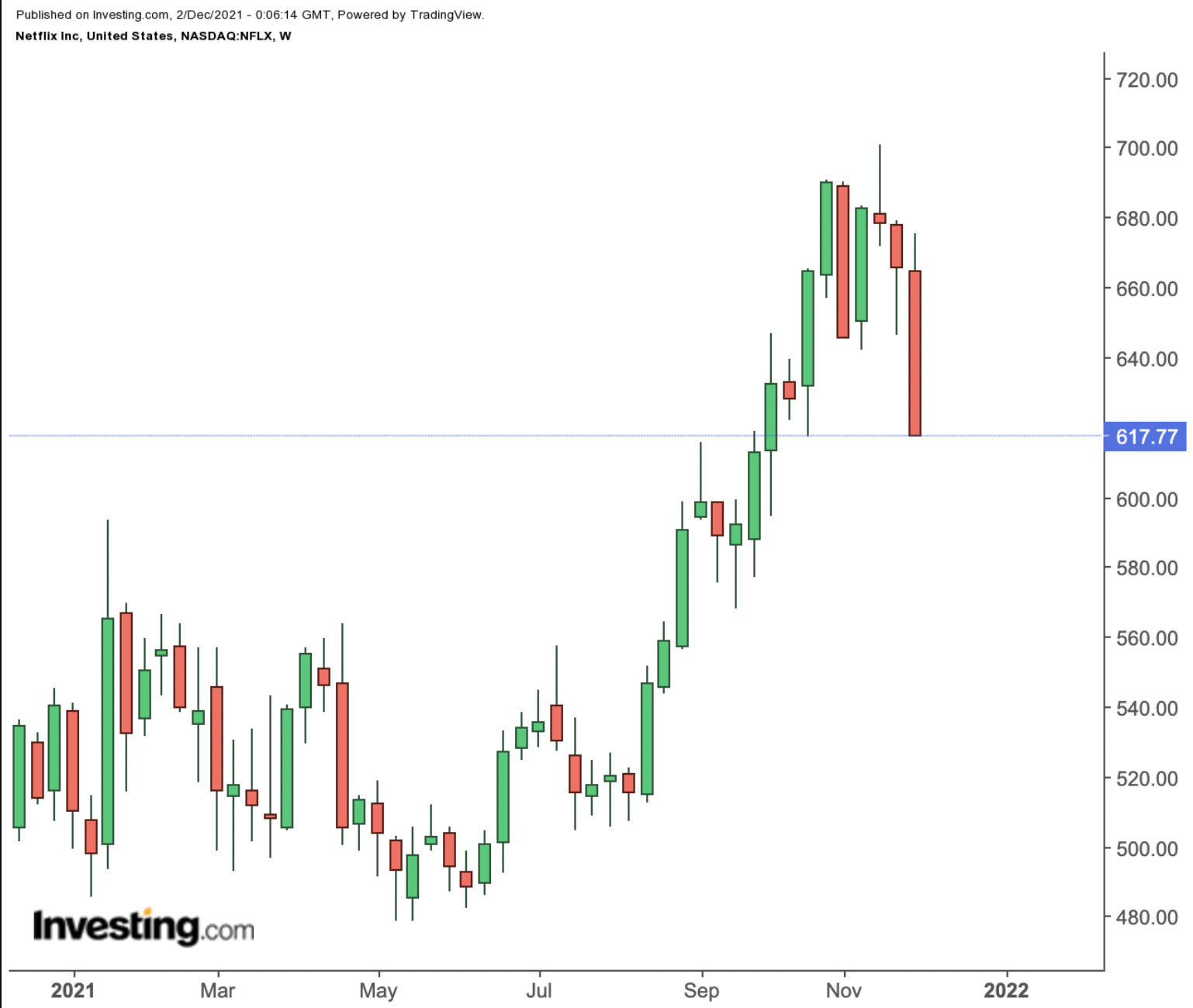 Investors were pleased to see that Netflix added 4.4 million new subscribers worldwide. The Asia-Pacific region contributed most of that growth. Now, the company has close to 214 million paid members. Management expects to see another 8.5 million paid subscribers join the streaming service in Q4.

“We had a couple big hits … Squid Game, La Casa de Papel, the first part of Season 5, but a lot of variety and quality programing throughout the quarter… So with our guidance, we're guiding to roughly just a tick under 20%, 19% revenue growth for the year.”

What To Expect From Netflix Stock

Among 44 analysts polled via Investing.com, NFLX stock has an “outperform" rating. 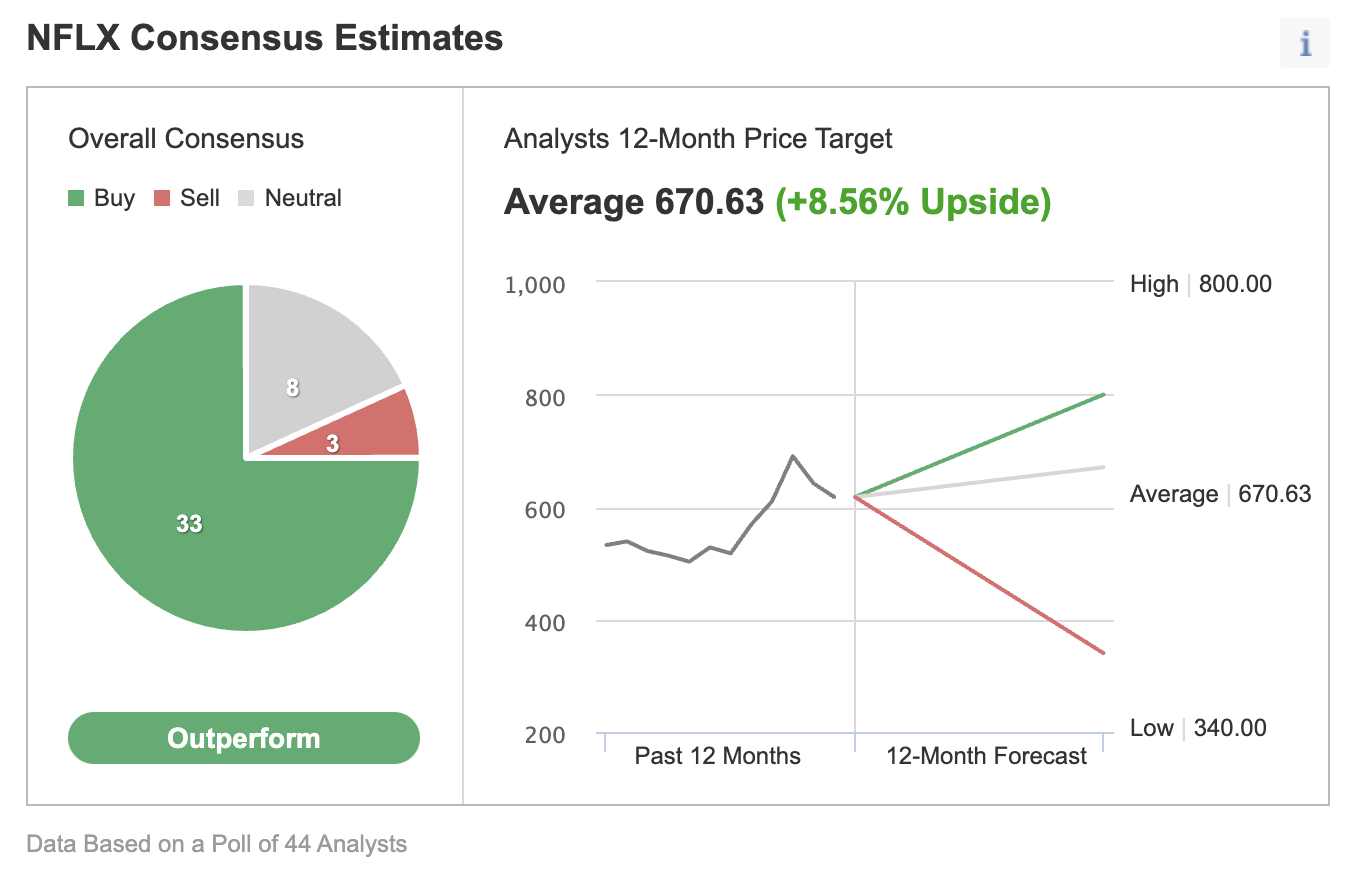 Similarly, according to a number of valuation models, such as those that might consider dividends, P/E multiples or the 10-year Discounted Cash Flow (DCF) growth exit method, the average fair value for NFLX stock stands at $681.09

Moreover, we can look at the company’s financial health determined by ranking it on more than 100 factors against peers in the communication services sector. In terms of growth and profit health, Netflix scores 4 out of 5 (top score) and, thus, has great performance.

Trailing P/E, P/B and P/S ratios for Netflix stock are 58.87x, 18.57x and 9.93x, respectively. These metrics show a frothy valuation level, even for a growth name like Netflix.

Readers who watch technical charts might be interested to know that, despite the price decline in the past two weeks, a number of NFLX stock’s short-term indicators are still cautioning investors.

Our first expectation is for Netflix stock to continue to slide down below $620, or even to $600, after which it should find support. Then, it will likely trade sideways between $620 and $630 and establish a new base. This will likely be followed by a new bullish move.

Investors who are not concerned with daily moves in price and who believe in the long-term potential of the company could consider investing in Netflix stock now.

On Dec. 2, NFLX shares closed at $617.77. Buy-and-hold investors should expect to keep this long position for several months while the stock makes an attempt toward $670.63, a level that matches analysts’ estimates. Such an up move would mean a return of more than 8.5% from the current level.

2. Buy An ETF With NFLX As A Holding

Readers who do not want to commit capital to Netflix stock but would still like to have exposure to the shares could consider researching a fund that holds the company as a holding.

Examples of such ETFs include:

A number of investors could be concerned that NFLX shares might fall yet further. If they are experienced with options trading strategies, they could put into play a bear put spread.

However, as we regularly highlight, many option strategies are not suitable for most retail investors. Therefore, the following discussion is offered for educational purposes as opposed to an actual strategy to be followed by the average retail investor.

Note: This is a risky trade that's not suitable for beginner options investors.

In a bear put spread, a trader has a long put with a higher strike price as well as a short put with a lower strike price. Both legs of the trade have the same underlying stock (i.e., Netflix) and the same expiration date.

The trader wants NFLX stock to decline in price. However, in a bear put spread, both the potential profit and potential loss levels are limited. Such a bear put spread is established for a net cost (or net debit), which represents the maximum loss.

For the first leg of this strategy, the trader might buy an at-the-money (ATM) or slightly out-of-the-money (OTM) put option, like the NFLX Jan. 21, 2022, 630-strike put option. This option is currently offered at $32.60. It would cost the trader $3,260 to own this call option that expires in less than two months.

For the second leg of this strategy, the trader sells an OTM put, like the NFLX Jan. 21, 2022, 610-strike call option. This option’s current premium is $23.80. The option seller would receive $2,380, excluding trading commissions.

The trader could easily lose this amount if the position is held to expiry and both legs expire worthless, i.e., if the NFLX price at expiration is above the strike price of the long put (or $630.00 in our example).

Let’s also see the maximum profit potential for this trade. In a bear put spread, potential profit is limited to the difference between the two strike prices minus the net cost of the spread plus commissions.

The trader will realize this maximum profit if Netflix price is at or below the strike price of the short put (lower strike) at expiration (or $610.00 in our example).

Investors who have traded options before are likely to know that short put positions are typically assigned at expiration if the stock price is below the strike price (i.e., $610.00 here).

However, there is also the possibility of early assignment. Therefore, the position would need monitoring up until expiration.

Finally, we should also calculate the break-even point for this trade. At that break-even price, the trade will not gain or lose any money.

We regard NFLX stock to be a solid long-term choice for most retail portfolios. This is particularly true for investors who want exposure to the growth of streaming entertainment services worldwide. However, shares could come under further pressure in the weeks ahead.