In normal times, stocks and bonds are negatively correlated—that is when stock prices tank, bond prices rise (and yields, which move inversely to prices, go down). The idea is that investors selling off stocks take their proceeds and buy safe haven bonds, like US Treasuries.

But recently, this hasn't been the case. Indeed, some analysts are already referring to the end of the classic 60/40 split between stocks and bonds as the appropriate way to balance out a portfolio. They note that the split is having its worst year ever, heading for a 49% downturn this year, after adjusting for inflation.

High inflation and fears of recession are taking their toll on all financial markets. Even gold , the ultimate safe haven, is down 6% this quarter. Cash is king, and right now, that’s what analysts are recommending. 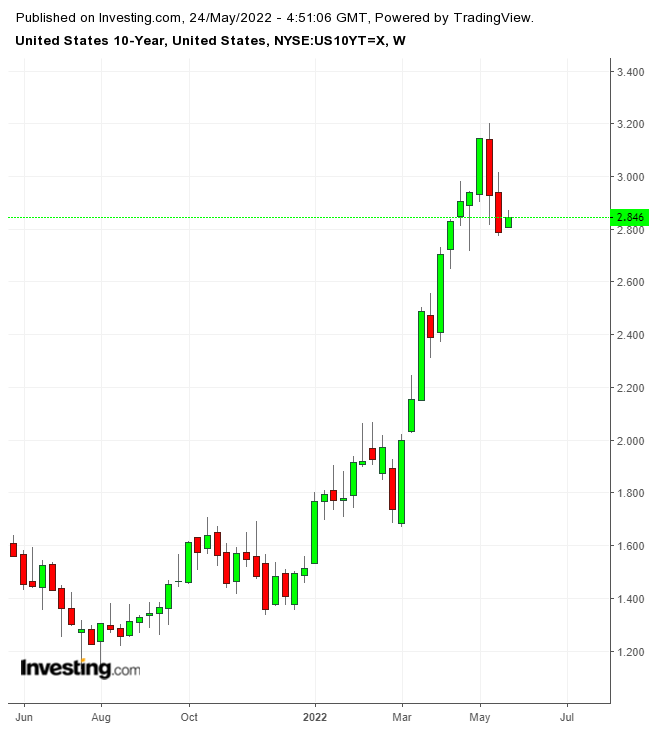 But some analysts dispute this thinking, saying that in fact, the positive correlation between stocks and bonds has already started to fade. The rising yields seen early in May, when the 10-year Treasury note yield spiked above 3.1%, have given way to more predictable behavior, with the benchmark's yield now having retreated to below 2.9%.

Stocks, as measured by the S&P 500 , are flirting with the bear market threshold, but bounced back on Monday, rising as bond prices fell. The yield on the 10-year note rose nearly 8 basis points, to close above 2.85%.

Nonetheless, there is a lot of gloom and doom out there. Investors will scrutinize the minutes —due out Wednesday—of the Federal Open Market Committee meeting which occurred on May 3-4, for evidence of how serious the Fed is about half-point increases in the policy rate in June and July.

The imponderable for Treasuries and other securities is whether the Fed’s hopes for a soft landing are realistic.

The Conference Board said last week that CEO confidence in the economy has moved into negative territory for the first time during the current expansion. Most of the 133 CEOs surveyed predicted a short, mild recession and they were vague about when it might happen. But two-thirds expected the Fed will trigger a recession with its rate hikes.

Meanwhile, European Central Bank President Christine Lagarde has indicated the eurozone’s central bank will raise its policy rate twice by a quarter-point in July and September, ending its long stay in negative territory. She left the door open for further hikes in the fourth quarter.

This doesn’t sit that well with the more hawkish members of the ECB governing council, who would like to see more aggressive action to fight eurozone inflation . 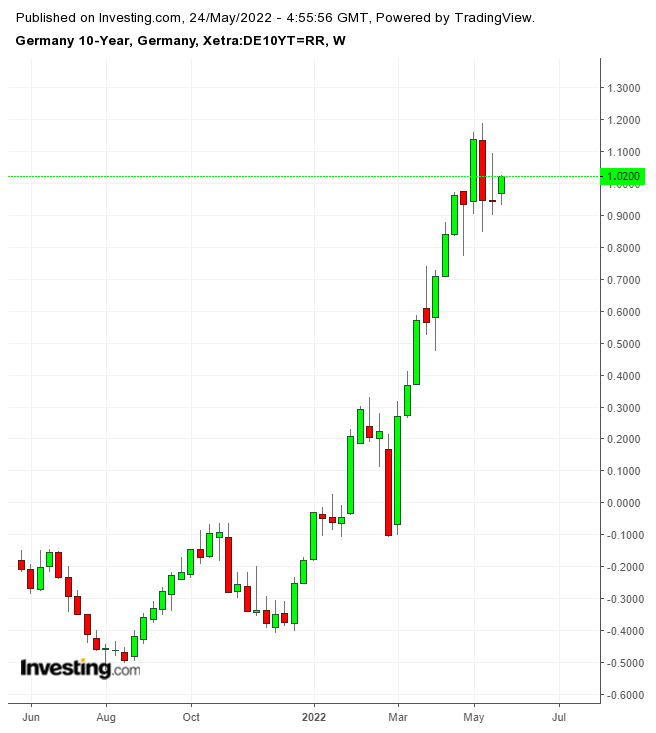 Her comments boosted yield on Germany’s 10-year bond , pushing it back above 1%, but just barely.

The closely watched Ifo Index of business confidence rose to 93.0, up from 91.9 in April, much better than the consensus forecast for a decline to 91.2. Economists said this indicated the resilience of the German.

The euro , after sinking to near parity with the dollar, dipping to below $1.04 earlier this month, rose to just under $1.07 in response.

As expected, the European Commission suspended the debt and deficit rules for euro member states, removing any immediate pressure for eurozone countries to cut borrowing or reduce debt.