Incorporated in 1986, the primary business of the NBFC includes financing the acquisition of rolling stock (wagons, trucks, electric multiple units, coaches, locomotives), leasing of railway infrastructure assets & national projects of the Indian Government and lending to other entities under the railway ministry, asset management, and expansion plans.

The 34-year-old public sector enterprise raises financial resources through term loans, taxable bonds, and external commercial borrowing with the objective of funding the CAPEX requirement of the Indian Railways.

This implies that IRFC’s loan book is directly correlated to the CAPEX requirements of the Railways, while the margins are protected by the fixed spread.

IFRC generates a significant portion of its revenue from financial leasing arrangements with the Railways for rolling stock assets, with lease rentals paid by the Ministry of Railways (MOR).

All this contributes to the high visibility of both business growth as well as the margins with zero non-performing assets (NPAs). 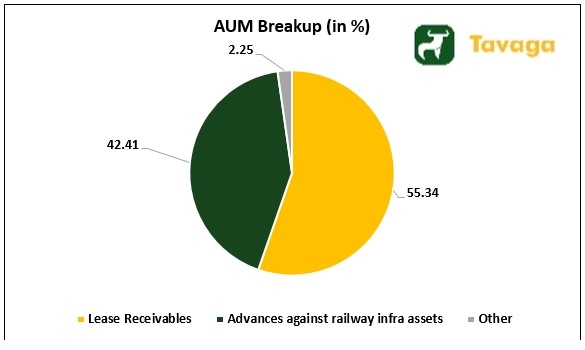 As of September 2020, the asset under management (AUM) contained 55.34 percent of rolling stock assets financing, 42.41 percent of project assets, and 2.25 percent of other assets. Under the rolling stock financing, the transactions are recorded based on the financial lease model. Every year, the company receives lease rentals on rolling stocks.

During the lease period, the full value of the asset, including interest, will be recovered from the Indian Railways. After a 30-year period, assets will be transferred to the Railways at a nominal price. On the other hand, project asset leasing that started in FY16 has been under a moratorium that ends in the current fiscal.

The on-leasing activities of the systemically important NBFC operate on a cost-plus margin model, implying that loans made to the Indian Railways are given out at the weighted average cost of incremental borrowing plus a pre-decided margin. This margin is determined by the railway ministry in consultation with IRFC at the end of a financial year.

The Rs 4,633 crore three-day initial public offer (IPO) of IRFC opens for subscription today and will remain open till January 20, with a price band of Rs 25 to Rs 26. The lot size is 575 and in multiples of it, thereafter.

The application money per lot at the upper band of the price range of Rs 26 per share is Rs 14,950. The state-owned entity intends to use these funds towards augmenting its equity capital base to meet the future growth requirements of the business and towards meeting general corporate purposes.

The revenue of the company, as mentioned above, are generated from lease income, interest on advances, loans, investments, and deposits. Revenue through other sources comprises dividends from investments in equity shares and other miscellaneous income.

Between FY18 and FY20, IRFC’s disbursements grew at a CAGR of 40 percent and stood at Rs 71,392 crores for FY20. However, due to the impact of the pandemic, the disbursement for the first half of the current fiscal stood at Rs 19,016 crore compared to Rs 24,534 crore in the corresponding period last fiscal.

More importantly, for the six months ended September 2020, the NIM stood at 0.71 percent. However, the net profit for the company grew at a CAGR of 22 percent over the last two years to Rs 3,192 crore.

Despite the risks and modest lending margins for IRFC, it is likely that the Indian railways will continue with capital expenditures in the future, given that the central government is hell-bent to upgrade the infrastructure in the country.

For instance, over FY15-FY20, the capital expenditure of the railways in India grew at a CAGR of 20 percent, leading to funding requirements through IRFC jumping over a CAGR of 40 percent.

This outlook coupled with a reasonable valuation of the company tilts the prospects towards optimism over the long-term for IRFC.

Disclaimer: The above write-up is only for informational purposes. Kindly do not consider this as a recommendation to subscribe to the fresh issue.