What do you get when inflation increases but investors still want the safety of government bonds? Record low real yields on U.S. Treasuries.

The real yield strips out inflation and the rate on the 10-year Treasury note fell nearly 6 basis points on Monday to about minus 1.27%. This means investors expect relatively high inflation to continue but they are worried about growth prospects. 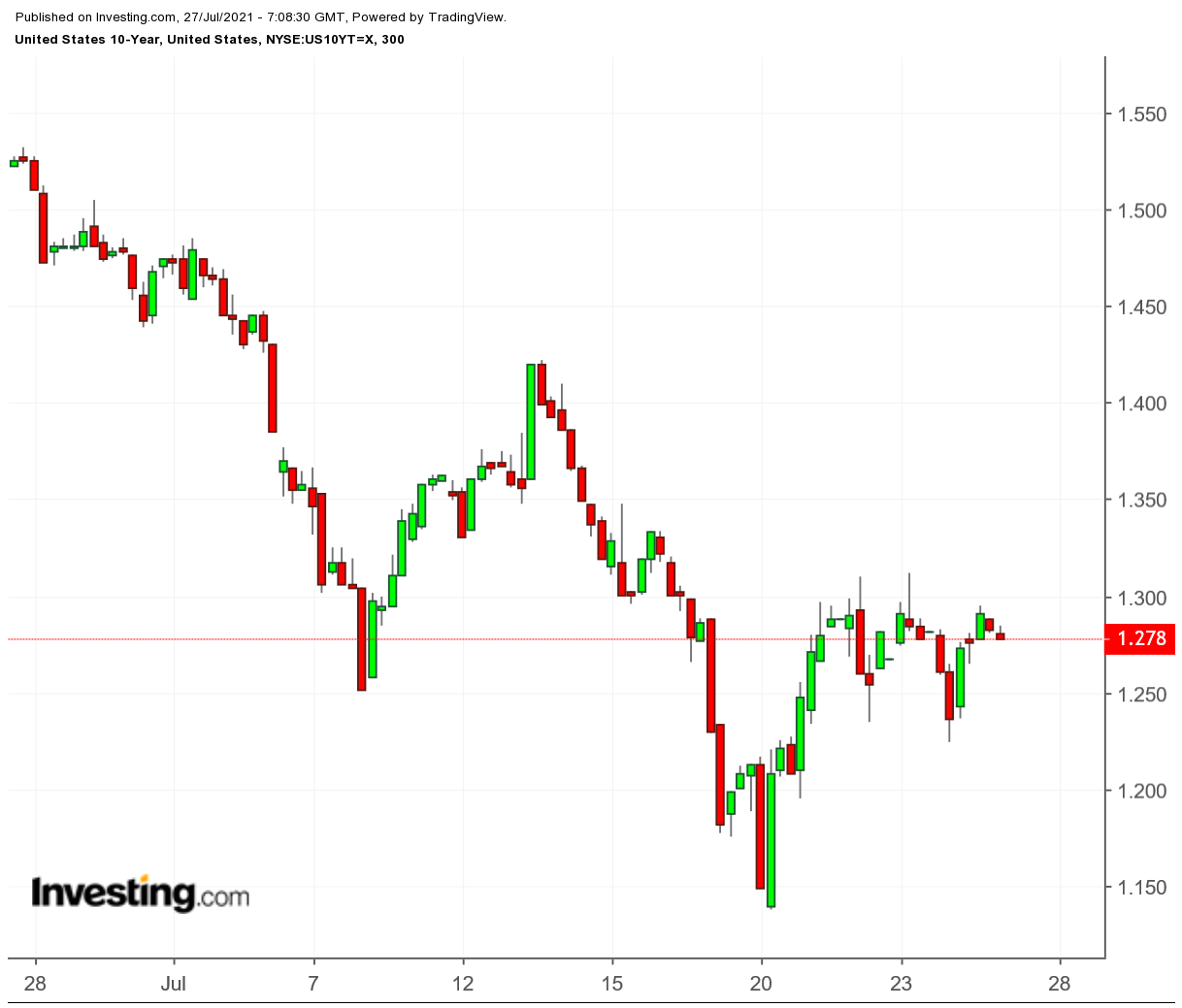 The Delta variant of the COVID-19 virus is leading to a resurgence of infections, which vaccines don’t seem able to stop, though they mitigate the impact. Infections, worries about infections, and a restoration of restrictions can all dampen what once looked like it was going to be a robust recovery.

California restored an indoor mask mandate, France passed legislation requiring a “health pass” certifying vaccination or a negative test for restaurants or travel, and the U.S. decided to maintain restrictions on foreign travelers entering the country.

Congressional wrangling over a bipartisan infrastructure spending bill continued Monday as prospects for a compromise dimmed amid several unresolved issues. Senate negotiators from both parties had hoped to have a deal on Monday to begin debate this week on the legislation. Failure of the bill, or even a delay, would endanger expectations for further government spending and for fiscal stimulus in general.

Foreign buying pushed down nominal yields on the 10-year Treasury note to nearly 1.22% in early Monday trading, before the yield recovered to Friday’s level of about 1.29% later in the session.

Asian investors were big buyers of Treasuries after a big stock sell-off in China and elsewhere in the region. A tense confrontation between U.S. and Chinese officials meeting near Beijing added to their unease.

The U.S. 10-year breakeven rate , derived from the difference between nominal yields and inflation-protected yields, nudged up to 2.36%, indicating the average inflation investors expect over the next 10 years.

Investment strategists say the falling real yields indicate expectations of higher inflation over the medium term, which the Federal Reserve will tolerate under its new policy.

The plunge in real yields also means the Fed will feel under less pressure to specify its timeline for reducing monetary stimulus, such as bond purchases, and economists are walking back forecasts of an earlier hike in interest rates.

Yield on Germany’s benchmark 10-year bond fell to nearly minus 0.45% after the  Ifo business climate index unexpectedly fell in July to 100.8 from a revised 101.7 in June, though analysts had expected a rise to 102.1. The 10-year yield recovered to minus 0.415% in later trading. 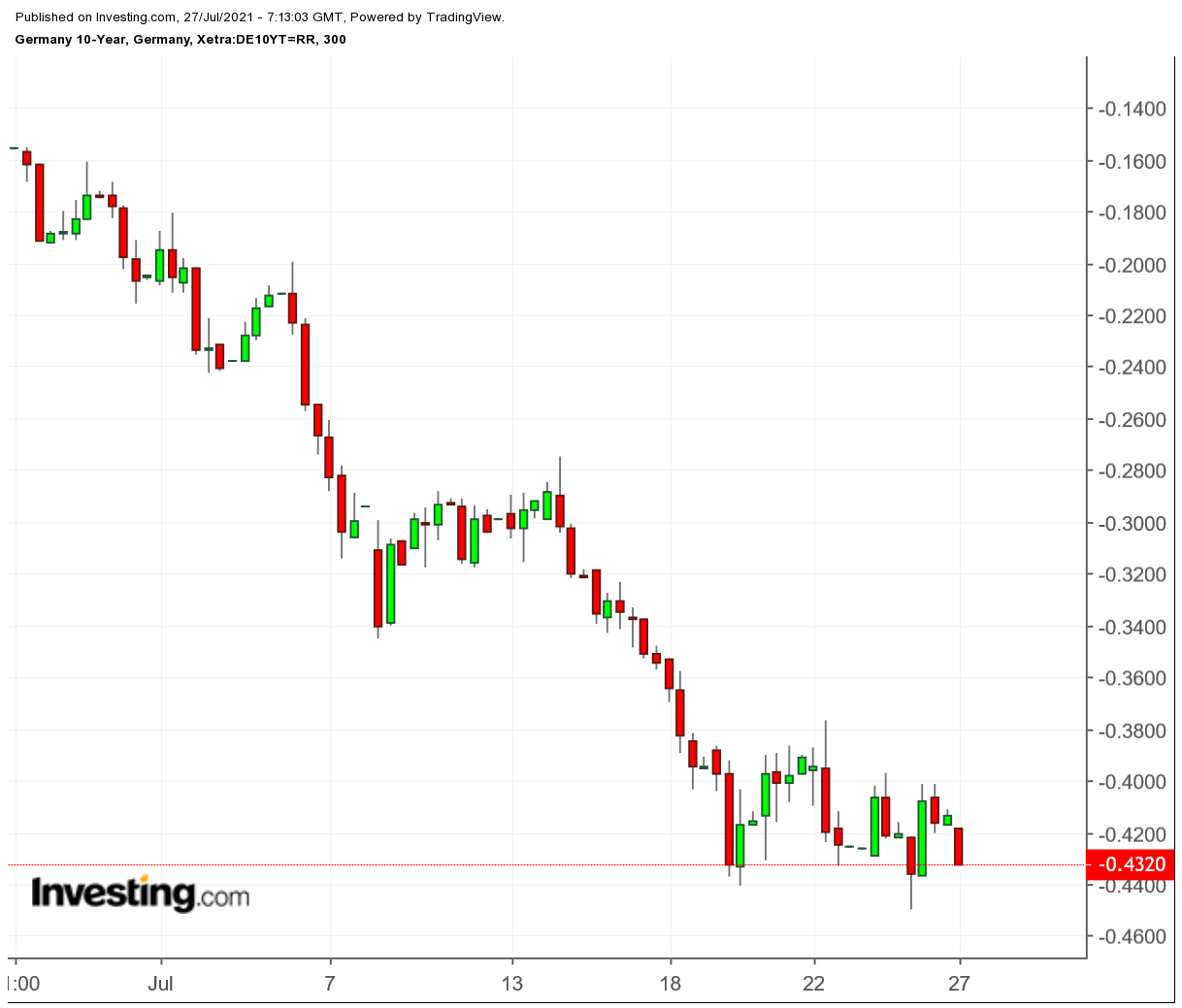 Analysts say investors may be overreacting, but yields are likely to remain low as they bid up prices until there is improvement in pandemic data.

Central bank purchases of bonds are also pushing up prices as issuing activity slows down during the summer.

Efforts by European governments to get hedge funds to stop inflating their government bond orders to get a higher allocation appeared to be bearing fruit. The bogus orders made it difficult for government debt agencies in France, Spain, and Italy to correctly price new issues. Order volumes have declined significantly in recent offerings, debt managers told Reuters.