Infosys Ltd (NS: INFY ) jumped almost +174% from its March’20 COVID lockdown panic low of 509.25 to the recent high 1392.70 and outperformed the NSE IT index to some extent, which also rose around +147% in the same period. Like all tech companies, Infy is also a prime beneficiary of COVID lockdown led the digital world and the part & parcel of ‘K’-shaped economic recovery post COVID world, unlike the consumer-facing service industry. 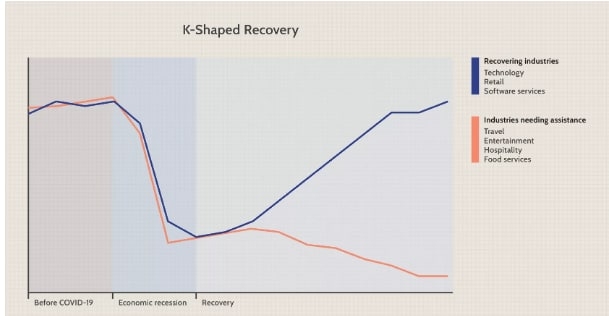 On 12th Jan, the U.S. DOL (Department of Labor) issued an advance copy of a final rule that changes how prevailing wage levels will be computed for purposes of permanent labor certifications. This rule will increase wage costs for most Indian tech companies, including Infy. Further on 15th Jan, the U.S. DHS (Department of Homeland Security) issued a new rule that will expand the employer-employee relationship’s definition. By broadening the employer-employee definition, the USCIS (US Citizen and Immigration Services) is now requiring the entities that use the services of the H1B visa worker to also file H1B petitions if they meet the broader definition of employer.

Trump’s new restrictions/regulations are a considerable blow to Indian IT professionals eyeing the U.S. job market while cutting back H1B visas for skilled foreign workers and tightening wage-based entry barriers aiming to be a good move for American workers’ protection. Although Biden is supposed to pass an immigration bill aiming to revote Trump’s executive actions in the first 10-days of his Presidency, he may not be in a hurry to completely overturn Trump’s H1B visa action as it’s a politically sensitive issue for both Democrats and Republicans. There is significant uncertainty, tensions among H1B visa workers as renewal is taking considerable time and also money, while it’s not guaranteed. Trump extended the freeze on H-1B visas by three months to March 31.

In his election campaign days, Biden has promised to be less harsh by expanding the total number of visas available and scrapping country quotas for green cards. He has also said he will ensure that foreign students getting STEM (science, technology, engineering, and math) PhD degrees in the US are exempt from visa caps, and that green cards are automatically doled out to those getting doctorates. Biden has said he will pursue a ‘wage-based allocation process’ for H1B visas that are more aligned with the needs of the U.S. labor market. But, if one reads the fine print of Biden’s stance on immigrant workers, it is clear that things will never go back to as good as they once were.

Trump/Republicans and some Democrats in Congress consider some information technology (IT) services companies as critical for national security. These companies provided essential services during the pandemic in keeping systems running for medical, energy, and other vital sectors of the U.S. economy. For cybersecurity/data integrity issues, U.S. companies receiving services often prefer to have tech professionals come on-site because it helps protect data.
Biden’s position on H1B visas is mixed. He seems in favor of increasing numbers, but also may try to implement some aspects of the Trump agenda—e.g., trying to give priority based on wage levels. There are Democratic critics of the H1B visa who see it as a threat to U.S. labor, so there may be attempts at reform that are a mix of greater flexibility with more enforcement measures and restrictions.

Biden said in a message on India’s Independence Day, aiming to lure Indian Americans to vote for him: “I know it is hard. My heart goes out to all those of you who have been the targets in the rise in hate crimes, the crackdown on legal immigration, including the sudden and harmful actions on H1B visas that for decades have made America stronger--- We will overcome and build back better than ever.”

Biden had also released a policy document in his election campaign trail aimed exclusively at Indian Americans (tech workers). Among other things, it mentions his plans to reform the H1B visa system, increase the number of visas, and eliminate ‘the limits on employment-based green cards by country, which have kept so many Indian families in waiting for too long’.

But Biden also needs to pass all these H1B visa reforms/rules through U.S. Congress/Senate in a bipartisan way, which looks virtually impossible at this stage, considering no filibuster-proof majority (60-seats), adverse political climate, and the wave of nationalism/protectionism created by Trump. So, the contentious issues of H1B visas for Indian tech companies may be far from over even under moderate Biden admin. Thus the issue of H1B visa continues to be a major headwind for Indian IT majors including Infy.

In Q3FY21, Infy reported an upbeat report card amid significant contribution from the cloud and digital along with new client additions in COVID lockdown/WFH times. Infy raised its revenue guidance, to 4.5–5% against Oct guidance of 2-3% and margin guidance to 24–24.5% (in constant currency). The company also bagged the highest-ever deal-wins, aggregating $7.1B, with 73% being net new clients. The net new deals for 9-months (Apr-Dec’20) was over $8B. Moreover, the net new deals signed in Q3FY21 are more than 1.5 times of the entire FY20. Infy management remains confident of the strength in business momentum and strong market share gains. Infy added 139 new clients and won 22 large deals, mostly in U.S. and Europe.

Infy’s margins remained stable with a positive contribution from better utilization and better onshore mix offset by transition costs, promotion, and compensation-related costs and others. But going forward, wage hikes effective from 1st Jan’21 may likely keep margins under pressure in Q4FY21.

The Infy CEO Parekh said: "Execution of client relevant strategy focused on digital transformation continues to drive superior growth, well ahead of the industry. The scale of new client partnerships with leading global companies such as Vanguard, Daimler, and Rolls-Royce (LON: RR ) demonstrate the depth of digital and cloud capabilities of Infosys."
In Dec’20 QTR, Infy secured a deal with German automaker Daimler AG (DE: DAIGn ) to support IT infra. It was also hired by British aerospace and defense conglomerate Rolls-Royce to provide sourcing engineering and R&D services for its civil aerospace business.

Considering previous trends and projected run rate the current fair valuation is around 1318 based on FY23 FWD/estimated core operating EPS 87.89 and an average PE 15. The FY24-25 core operating EPS should be around 101.08-116.24 and applying a fair core operating PE of 15, Infy should scale around 1515-1745 in the coming days (FY22-23). The main driver may be huge fiscal/infra/green stimulus on both sides of the Atlantic, which may result in higher IT spending to cope with the increasing digitalization of the economy.

As an export-heavy company, expected higher USDINR under Biden's strong USD policy may also help Infy as-well-as other techs. But in the short term, H1B visa uncertainty even under Biden admin may be a major headwind for the stock.

Technically, whatever may be the narrative, Infy now has to sustain over 1360 for 1400-1450 levels and above; otherwise, it may correct to 1050-945 levels, where one can enter (buy) again for mid-long term investments. 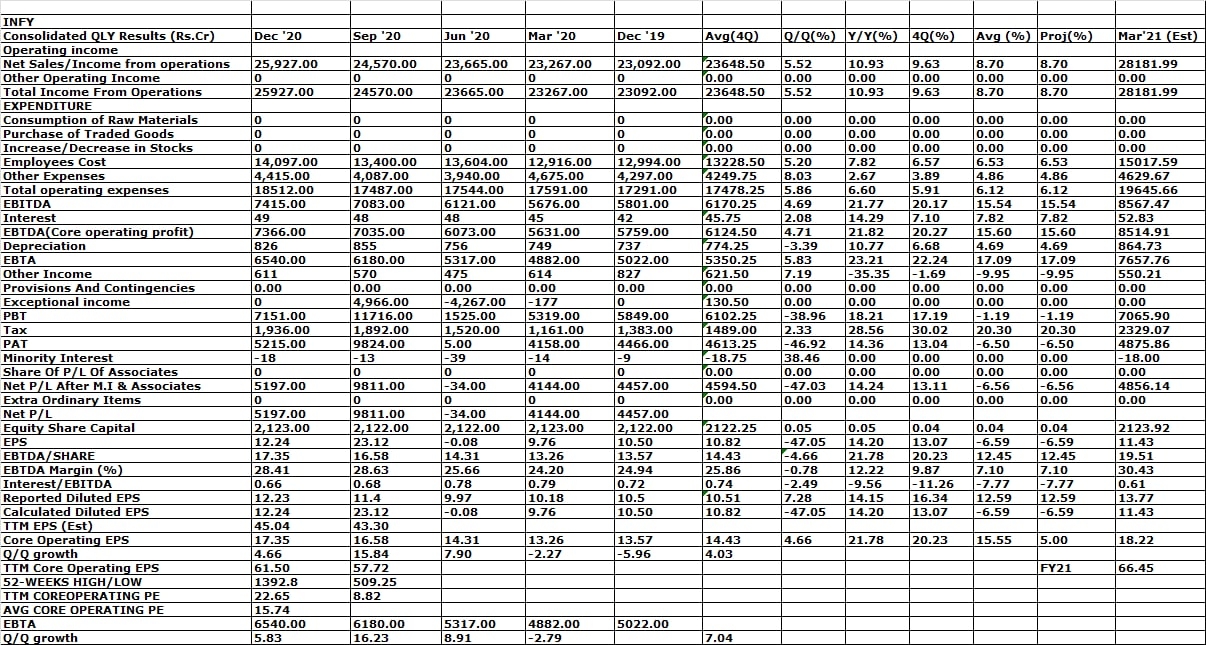 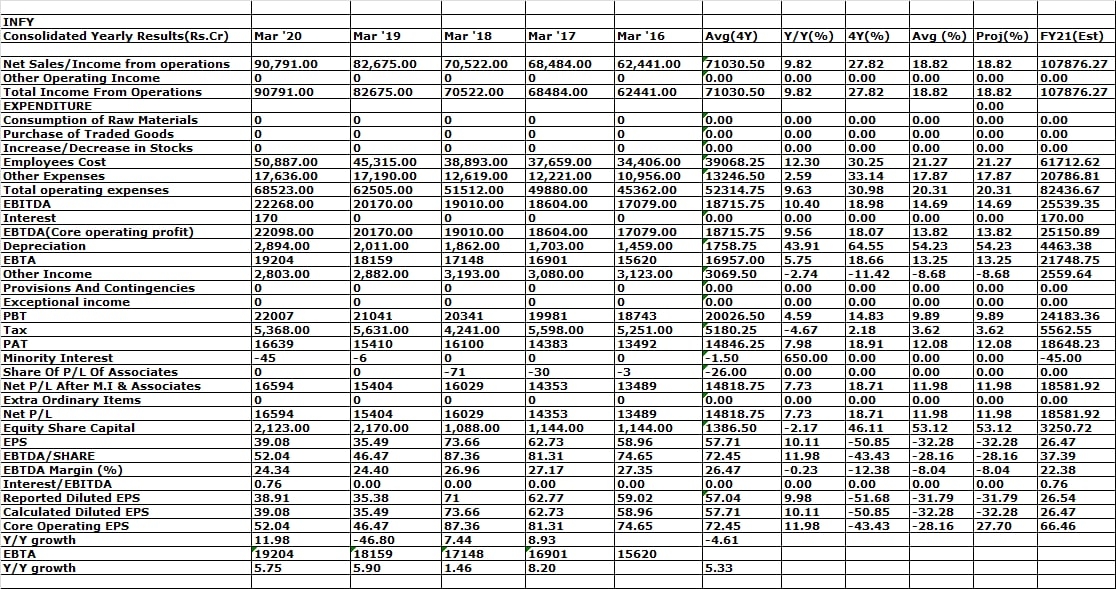