On Monday all focus was on Indian GDP and actual fiscal numbers. The MOSPI flash 1st estimate data shows that the Indian economy grew by +1.6% in Q4FY21 accelerating from an upwardly revised +0.5% growth in Q3FY21 and above market expectations of +1.0% (y/y). Sequentially the Indian economy expanded by +7.5% in Q4FY21 (q/q). Q4FY21 was the 2nd straight quarter of growth (y/y) since the country exit a pandemic-induced recession. But overall for the full year (FY21), the Indian economy contracted -7.3% less than the earlier estimate of around -7.9%.

In Q4FY21, on the GDP expenditure side, both private and public/government spending rebounded while gross fixed capital formation (mainly government CAPEX) rose faster amid pent-up demand (as the economy was almost 98% open) and fiscal/infra stimulus. The economy was also boosted festival demand and huge expenses by the government as well as various political parties in elections for four big/medium states. But net trade contributed negatively to growth as imports jumped at a faster rate than exports. On the GVA production side, output rose for manufacturing, construction, and utilities, while declined for agricultural and farming. 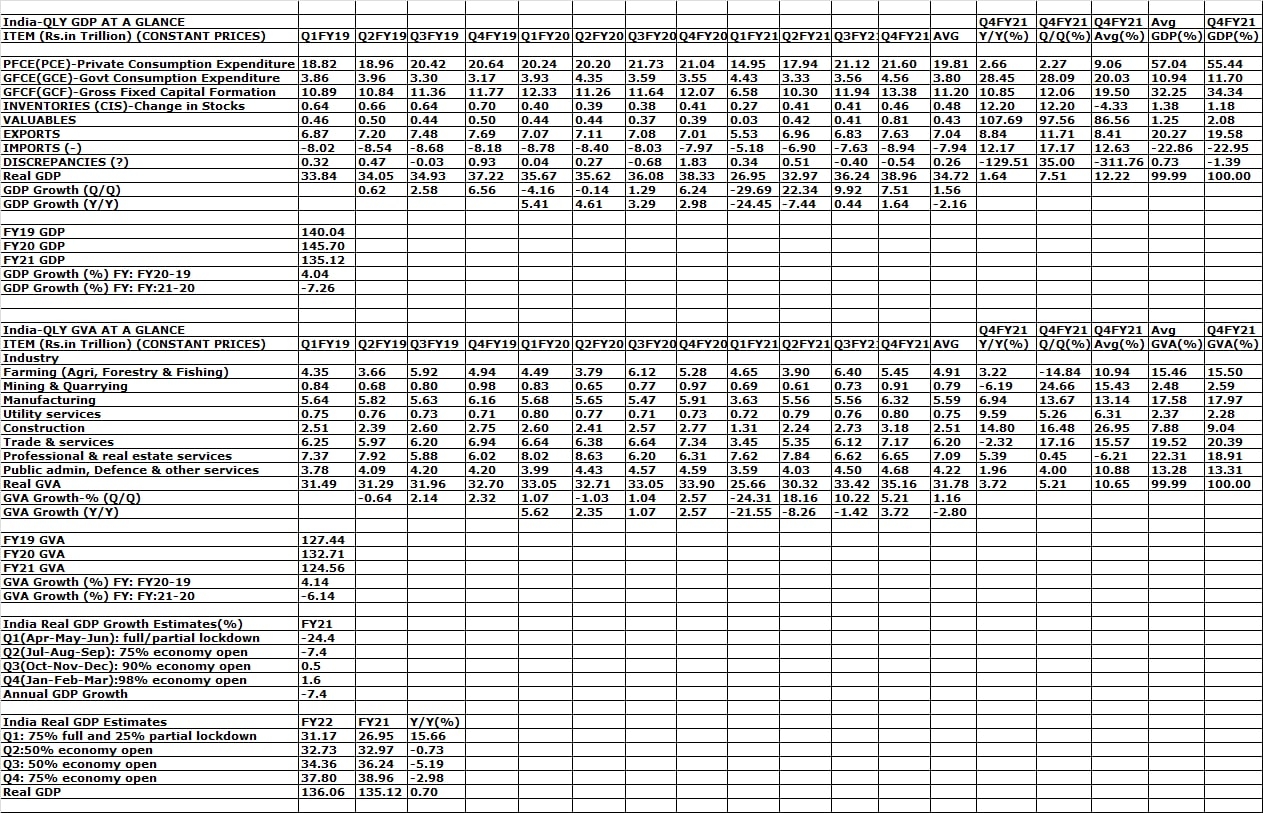 The real GDP for Q4FY21 was around Rs.38.96T, at a lifetime high against the average quarterly run rate/normal economic output (capacity) around Rs.35T. The FY21 real GDP was around Rs.135.12T against pre-COVID FY20 GDP Rs.145.70T; i.e. still around -7.8% down. Looking ahead, the Indian economic growth may be almost flat in FY22 amid the COVID tsunami, full/partial lockdowns across the country, slow vaccinations, lack of consumer confidence, economic uncertainty & scarring effect, and muted consumer spending/private CAPEX even after considering lower base effects for FY21.

As the Indian economy was already hovering around 15% above the quarterly capacity in Q4FY21, going forward, there may not be any significant spare capacity available until there is any meaningful fiscal stimulus to boost up demand (consumer spending) and private Capex (business investments).

In any way, economic GDP is only an estimation, not a real figure. On the other side, the country’s tax revenue is a real figure to gauze actual economic activities. In that sense, India’s FY21 tax revenue came around Rs.14.24T vs Rs.13.57T in FY20 and RE Rs.13.45T. But non-tax revenue for FY21 was at Rs.2.08T against Rs.3.27T in FY20 and RE Rs.2.11T. Total revenue came around Rs.16.32T in FY21 vs Rs.16.84T in FY20; RE Rs.15.56T, registering a decline of around -3.09%. The jump in tax revenue was mainly boosted by surging GST / personal tax collection, higher taxes on petroleum, and better tax compliances, while non-tax revenue was affected by lower RBI payouts. 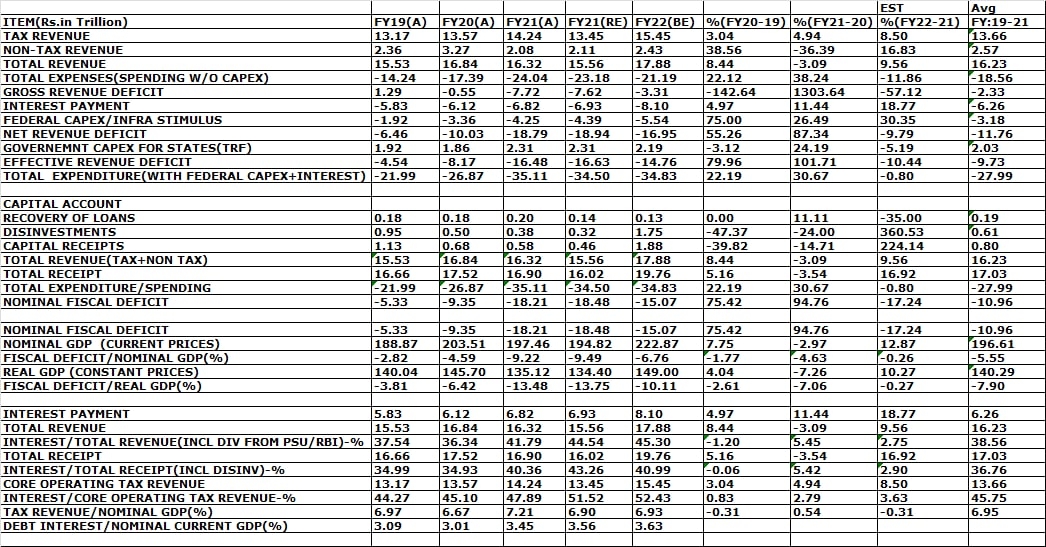 The Markit India Manufacturing PMI slips to a ten-month low of 50.8 in May, just above the boom/bust line sequentially from 55.5, much below market expectations of 52.0, amid COVID tsunami and full/partial lockdowns across the country. Both output and new orders grew the least in ten months, while there was a substantial slowdown in the growth of input purchasing and another round of job shedding.

May data continued to signal to lengthen supplier delivery times, with vendor performance worsening for the third straight month. The deterioration was linked to global shortages of raw materials and the pandemic. Prices data showed input cost inflation easing to a four-month low but remaining sharp and above its long-run average. Meantime, firms lifted their selling prices again to protect margins, with the rate of charge inflation solid but softening from April. Finally, the overall degree of optimism towards the year-ahead outlook for the output was at a ten-month low

“The Indian manufacturing sector is showing increasing signs of strain as the COVID-19 crisis intensifies. Key gauges of current sales, production, and input buying weakened noticeably in May and pointed to the lowest rates of increase in ten months. In fact, all indices were down from April. Amid a lack of new work, goods producers reduced headcounts again, with the rate of job shedding quickening in May. That said, the detrimental impacts of the pandemic and associated restrictions saw in the manufacturing sector are considerably less severe than during the first lockdown when unprecedented contractions had been recorded. Growth projections were revised lower, as firms became more worried about the escalation of the pandemic and local restrictions. The overall degree of optimism towards the year-ahead outlook for the output was at a ten-month low, a factor that could hamper business investment and cause further job losses. 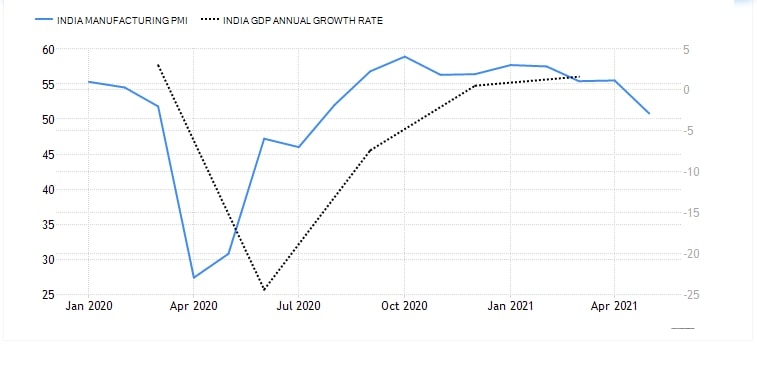 Overall, Markit pointed out the contraction of the Indian economy in Q1FY22 from Q4FY21 amid the 2nd COVID wave and full/partial lockdowns. In Q1FY21, the Indian economy contracted almost -30% sequentially (q/q) amid an all-out national lockdown for around 9-weeks. This time, the economy may also contract around -20% sequentially in Q1FY22. India’s economic recovery and improved revenue collection will depend on the pace of COVID vaccination, dependable herd immunity, and full unlocking of the economy so that the public, as well as government, feels confident enough to resume normal activities.

Looking ahead, Modi admin may try to vaccinate maximum people of the country by at least a single dose (as per availability) by H1-2022, so that the COVID pandemic can be brought under significant control with reduced scarring effect on the economy before UP state election early 2022. The UP election will be an acid test for Modi’s political popularity and policy priority in the coming days. In the UP as-well-as 2024 general election, we may see WB CM and firebrand leader Mamta Banerjee as PM candidate (supported by almost all other opposition regional political parties including INC/Rahul Gandhi, and backed by election strategist Prashant Kishore). If this happens amid plummeting popularity of Modi, the Indian market can correct substantially on political and policy uncertainty in the coming months.