There are rumors that Holcim (SIX: HOLN ) Ltd, a Swedish multinational company and the world's largest cement player is looking to exit the Indian cement market. The question is why is Holcim planning to exit a lucrative business which accounts for about 25% of its global portfolio?

The race to acquire Holcim’s cement business has heated up and the bids are coming in, the sale will bring about $10 billion to the Holcim kitty.

Why is Holcim exiting?
Holcim’s Strategy 2025 is about moving towards a greener portfolio, all its new acquisitions in budding solutions are in line with this goal. To meet the objective the company has started divesting its stake in Asia, Russia, and Brazil. The company hopes to reduce its revenue from cement from 60% in CY20 to 35% in CY25, at the same time raising the share of green products from 8% to 30%.

Why sell when the sector has a bright future?
Ambuja Cements (NS: ABUJ ) announced that it expects the industry demand to go up by 7%. The sector is expected to flourish due to infrastructure growth, growing demand for housing, increase in rural income, and industrial growth.

After the merger with its French rival firm, Lafarge in 2015, LafrageHolcim was created. The company has had to undergo major restructuring by divesting its holdings in Asia and Europe. The company was forced to reduce its debts to meet standards set by global anti-trust regulators. It has been on a selling spree and had sold its unit in Brazil for $1 billion in September, last year. 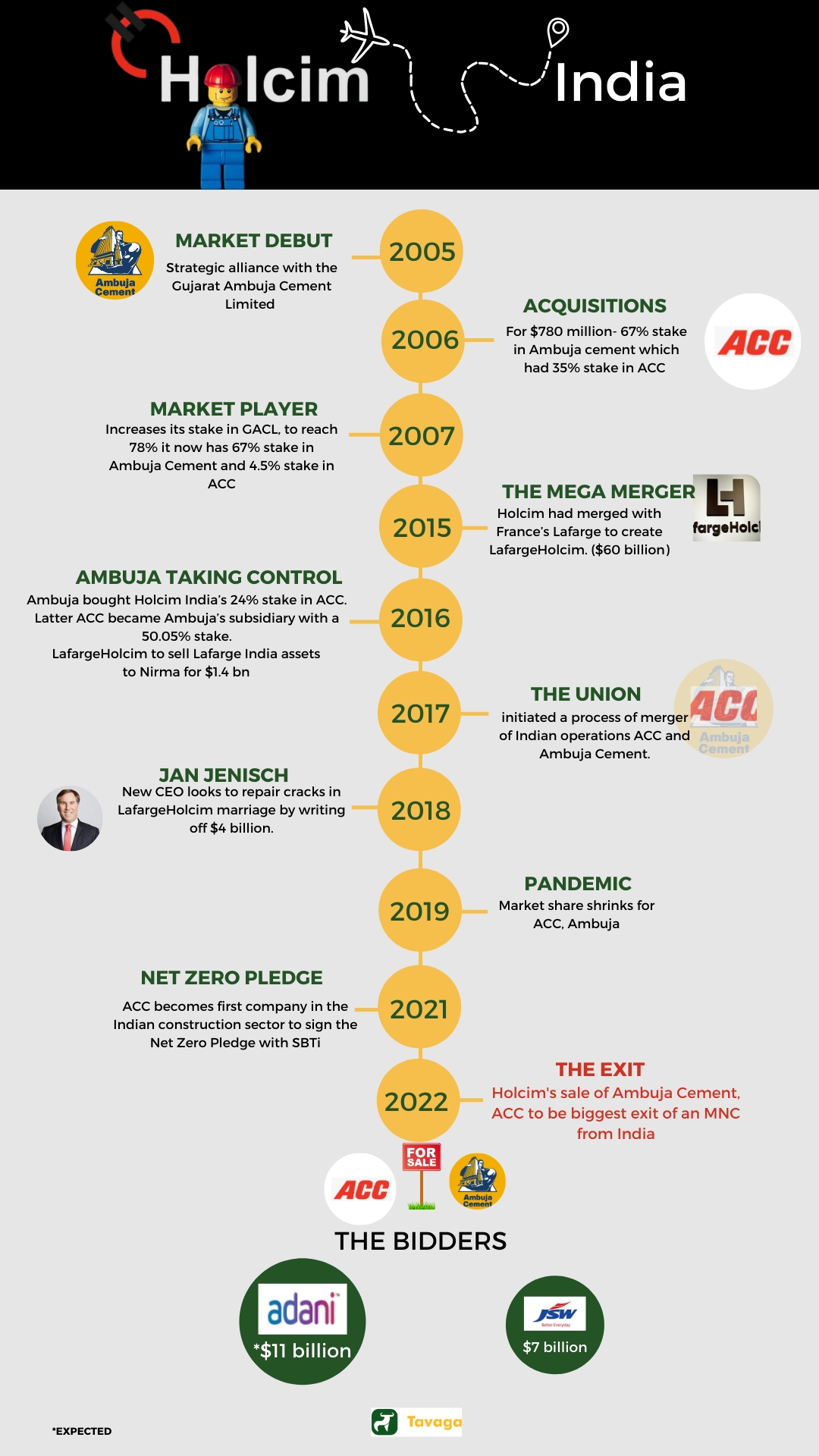 What would a merger mean for the Indian cement industry?
The company holds a stake in both Ambuja Cement and ACC (NS: ACC ) and which together have a combined market capitalization of 1.14 lakh crores with Ambuja having 73,349 crores to its name alone. The company holds a 63.1% stake in Ambuja Cement and a 4.48% stake in ACC, both holdings are via Holderind Investments Limited.

Mergers and acquisitions are the norms in the Indian cement industry mainly because there is a long gestation period for the new plants. In the past UltraTech cement has acquired Binani Cement, Century Cement, and JPA. other firms have also used M&A to grow but both ACC and Ambuja Cements did not capture the market in this manner and failed to hold their positions. Whichever company manages to acquire Holcim Ltd will become the second-largest player in the Indian market, with the company's capacity to produce 66 million tonnes per annum (mtpa) which will grow to become 80 mtpa after expansionary projects are transferred.

Bidders like Adani (NS: APSE ) and JSW Cement are frontrunners in the deal and it is to be seen how they place their bids, both Ambuja and ACC trade at a valuation of $200 and $125 per ton, and most deals in India have been valued at $100-130 per tonne, Aditya Birla owned UltraTech cement being the most aggressive with its valuations.

With Ultratech Cement (NS: ULTC ) the matter is a bit more complicated, it is already the biggest player in the industry with its capacity of 119 mtpa, almost double Holcim’s capacity. The company may have to seek approval from the Competition Commission of India (CCI). The CCI approval is necessary to keep the region-wise monopoly in check.
For the deal to go through the company needs an investment of $10.2 billion. Such a huge buyout leads to high leverage in the acquirer’s balance sheet and can be a reason for concern. A higher concentration of power would be beneficial for the players in the sector as they will have more control over the prices compared to a fragmented market.

Bidding war ahead?
Lots of firms are vying for the controlling stake in Ambuja Cement, and industry leaders like Adani Cement, JSW Cements, UltraTech Cements, and Shree Cements (NS: SHCM ) are all competing to acquire the shares. Holcim accounts for almost 13% of the entire industry’s production capacity.

Since this is an opportunity to enter the highly competitive, price-sensitive, and fragmented cement industry, there is a lot of interest being seen in international cement players to tap into the Indian market. The JSW group has also sought private equity funding and has made an offer of $7 billion for the companies.

The company has recently finished the first round of deliberations with JSW Cements, Adani Cements, and Shree Cements when Ultratech Cement expressed interest in the deal. Holcim Ltd will carefully deliberate each offer. If this deal works out it will be one of the biggest acquisitions in Indian history.

Conclusion:
This space will be something to watch out for as bids will be upwards of $10 billion. Who acquires the companies will also be a major deciding factor for the cement industry and it is to be seen whether CCI gives Ultratech Cement the approval or will there be a new bigger player in the market, investors should brace for high volatility as the bids keep coming in and should expect an 8-10% change in price due to changed Capex structures and delays in the sell-off process.