Cryptocurrency fever keeps accelerating, along with the asset class’s mark cap. Bitcoin remains the leader, and each new high for the token serves to boost the profile of the entire digital currency sector.

Investors and speculators have one consistent goal, to make money—the more money, the better. The chance to turn a small investment into millions is intoxicating. Gambling casinos thrive on this and profit from the greed. The incredible price appreciation for some cryptocurrencies will create periods of fear. Human emotions will rise and fall with token prices.

Meanwhile, the asset class’s rise creates a frenzy of activity as investors and traders look for the next Bitcoin. Harmony (ONE) and Dent (DENT) are two tokens that could be positioned perfectly for this, as each trades for pennies, but have market caps over the $780 million level.

Last week, Bitcoin reached another new high when the nearby futures contract traded to $65,520 per token on Apr. 14, though the contract was below $54K at time of writing.

Moreover, it's a magnet for people looking for the next opportunity to turn pennies into a fortune. Bitcoin hit its high on the same day that Coinbase (NASDAQ: COIN ) began trading on the NASDAQ .

Everyone loves an “inexpensive” investment for three reasons

I live in Las Vegas and marvel at the people putting $100 bills into slot machines in casinos, bars, restaurants, and even gas stations and supermarkets throughout the city. The odds of winning make the machines little more than paper shredders for money.

However, that doesn't stop people from consistently feeding them. When I lived in New York City, there was a TV ad for the lotto that said, all it takes is a dollar and a dream. That dream is a powerful motivator.

The digital currency asset class has caught the attention of the masses for three emotional reasons:

While the odds of hitting the next digital coin bonanza are low, people will use Bitcoin and some of the other tokens as examples of how they can turn a small investment into a fortune. Everyone loves the opportunity to get rich, which keeps the courts busy prosecuting scammers that profit from the human impulse that defies logic and reason. Bitcoin’s example may be dangerous for some, as it will increase the willingness to throw good money after bad investments.

When looking for a diamond in the rough in the digital currency asset class, there were over 9,400 tokens from which to choose. Most will fade into obscurity.

Therefore, I only look for those that already have some critical mass. I define critical mass as a substantial market cap, which establishes liquidity. Two tokens with “low” prices and significant market caps are Harmony and Dent.

Harmony (ONE) is the eighty-ninth-leading cryptocurrency. At around 11.5 cents per token, ONE had a market cap of $1.073 billion on Apr. 21.

ONE is a blockchain-based platform built to solve the riddle of delivering both scalability and decentralization at no expense to either. Harmony’s website explains it is a “sharding protocol with a trustless Ethereum bridge.”

A sharding protocol in crypto-speak is a database partitioning technique used by blockchain companies to scale, enabling the processing of more transactions per second. Sharding helps reduce the latency or slowness of a network since it splits a blockchain network into separate shards.

Thinking of broken glass, a shard can be painful if it gets under your skin. Meanwhile, the ONE token has traded below 0.3 cents and as high as over 19.6 cents since 2019. 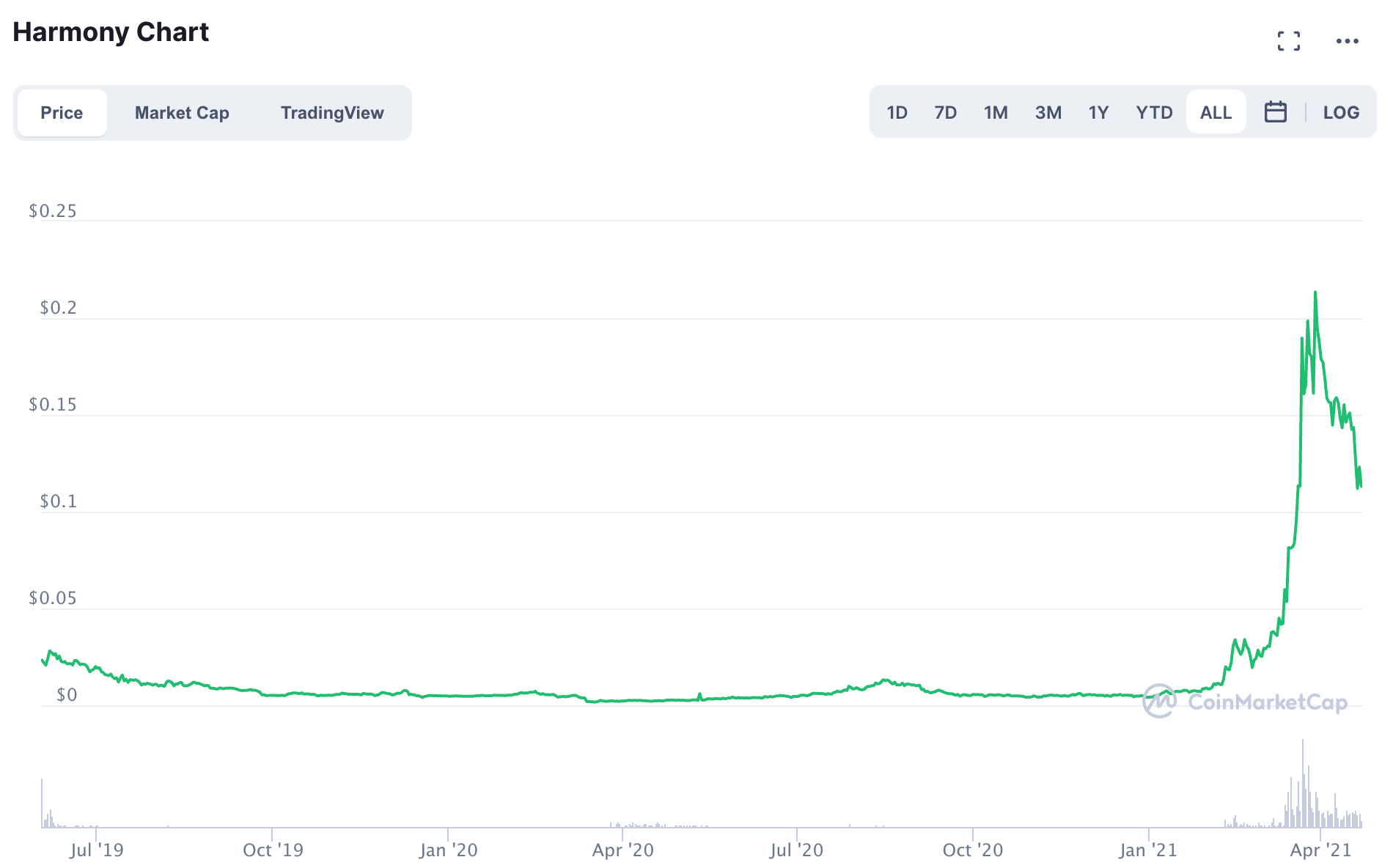 The chart shows that ONE appreciated from around 0.4 cents at the end of 2020 to over the 21 cents level at the end of March, a rise of over fifty times in three months. At 11.5 cents, ONE could attract a lot more interest given its liquidity with an over one-billion-dollar market cap.

Dent: under a penny per token, with a significant overall value

DENT is a candidate for a magnetic attraction for those looking for a nominally cheap token with a robust valuation. DENT Coin promises to disrupt the mobile data industry worldwide. The company’s goal is to liberate mobile data, allowing anyone to buy, sell, and donate data through the Ethereum blockchain. The Dent Coin is the central currency that is the hub of the effort.

Dent’s website details the DENT Exchanges marketplace. DENT has been around since late 2017. 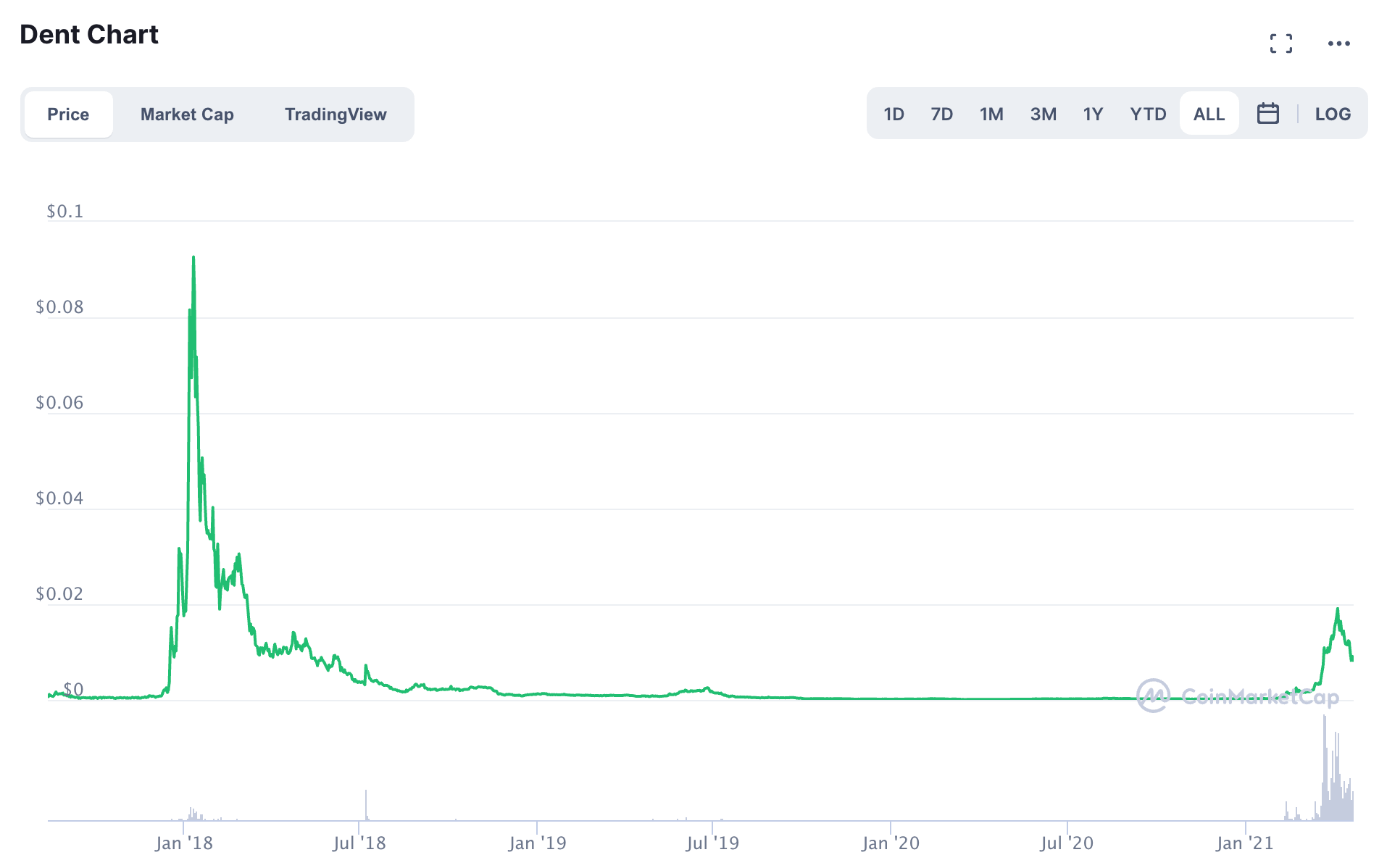 The chart illustrates that DENT hit its all-time high in early 2018 at roughly 10 cents, after Bitcoin reached $20,000 for the first time. Since then, the price action has been disappointing. The most recent high came on Apr. 5 at nearly 2 cents, but DENT pulled back to below the .0085 cents level on Apr. 21.

DENT could be attractive as it evokes the greed emotion in crypto with an over $780 million market cap. One dollar buys around 120 DENT tokens, making it very appealing to the dollar and a dream crowd.

Only invest what you can afford to lose

The thing to remember about all cryptocurrencies is to only invest what you can afford to lose. Whether the digital currency in question is trading at over $65,000 per token or a fraction of a penny, the risk is the same in the burgeoning asset class, no matter what any “expert” may say. A reward is always a function of risk in any market. The risk of a 100% loss comes with the potential of Bitcoin-type rewards.

The crypto asset class’s returns make it fertile ground for scammers looking to extract money from people hoping to get rich quickly. So be careful, do your homework, think critically, and only allocate capital you are willing to part with in the cryptocurrency asset class.

The higher Bitcoin, Ethereum, and the tokens' market caps rise, the more the attraction since greed is a powerful emotional response. Therefore, any investment should be taking greed’s counterpart—fear—into account. Parabolic markets can turn ugly in the blink of an eye.