After a blistering rise in yields last week, US Treasuries on Monday calmed down. Yields on the benchmark 10-year Treasury note receded to about 1.43% from nearly 1.46% at Friday's close after spiking above 1.5%. The five-year note yield fell to below 0.72% from 0.775% on Friday.

Market participants cited an unscheduled purchase on Friday of A$3 billion (US$2.33 billion) of bonds by the Reserve Bank of Australia as evidence that central banks could and would react to curb the rise in bond yields if necessary.

On Monday, the Australian central bank said it is doublings its daily purchases of bonds to A$4 billion. The yield on 10-year government bonds plunged about 25 basis points to hit 1.67%. 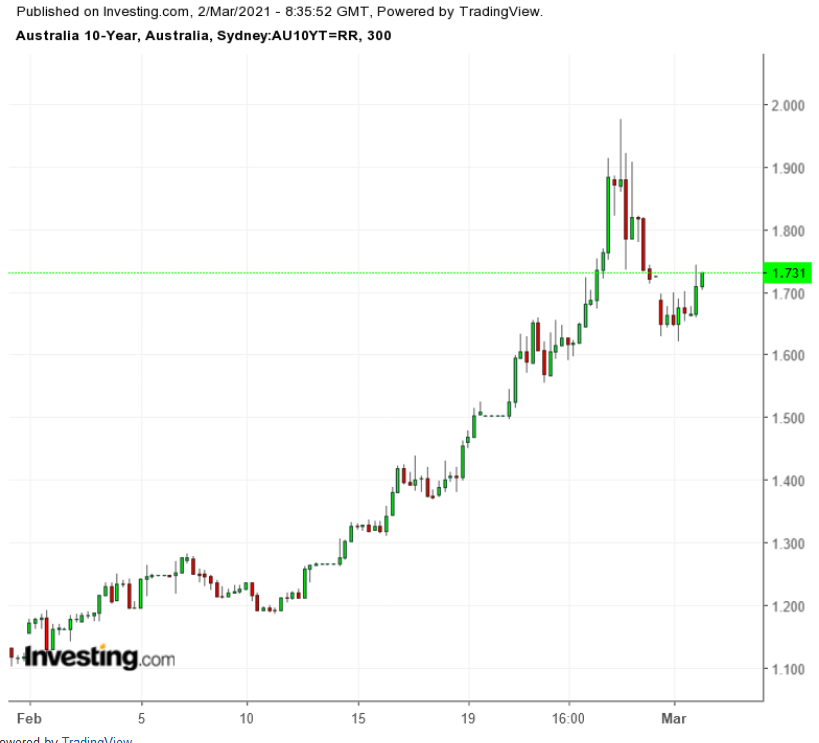 Investors were waiting to see if the RBA board would increase the size of its overall bond purchase program from the current A$200 billion at its meeting Tuesday.

In the US, stocks rose again to start the week as the bond market calmed down as investors asked themselves whether the bond selloff last week was overdone. An appearance by Federal Reserve Chairman Jerome Powell on Thursday will be closely watched for clues about Fed intentions.

Powell affirmed last week that the Fed will keep easy money policies going for a long time, and participants will be watching to see if he will put his money where his mouth is and follow the RBA’s lead by hinting at increased Treasury purchases to brake bond yields if necessary.

Analysts believe the RBA move could be a significant indicator of central bank intentions. French central bank governor François Villeroy de Galhau, a member of the European Central Bank’s governing council, said on Monday the ECB must be flexible in its bond purchase program to counter any undue rise in yields.

Yields on Germany’s benchmark 10-year bond fell to minus 0.35% on Monday after hitting nearly minus 0.2% on Thursday, marking a recovery of EU government bond prices.

Fed policymakers were busy last week dampening inflation fears, keeping to Powell’s line in congressional testimony that the economy is a long way from reaching the growth and employment that will fuel inflation.

But last week’s surge in yields rattled market participants. Investing legend Warren Buffett prophesied a lean time ahead for bond investors as rising rates push down prices. Bonds are not the place to be, he said in his widely read annual shareholder letter.

Richmond Fed President Thomas Barkin picked up Powell’s refrain on Monday, saying the rise in yields reflects an improved economic outlook and anything else would be a disappointment. He expects inflation to rise, but doesn’t think it will be a problem.

Market forces overwhelmed those assurances last week and there is a risk of a credibility gap widening as Fed officials keep protesting.

In historic terms, the Fed policymakers could be right. What’s nagging at investors is that we are in an unprecedented situation after nearly a year of pandemic and lockdowns. What investors want is some reassurance that central banks will be nimble enough to cope with unexpected developments.

That is why the RBA action looms so large. The hope is that other central banks will be equally decisive.