It isn’t exactly rotational play but investor confidence is bubbling over in agricultural markets, with soybeans leading the three main US crop futures for the best week in almost eight years, while sentiment for stocks totters.

Soybean prices are on a tear with China buying all the US supply it can for feed as it tries to nurse back to health its virus-decimated hog industry. 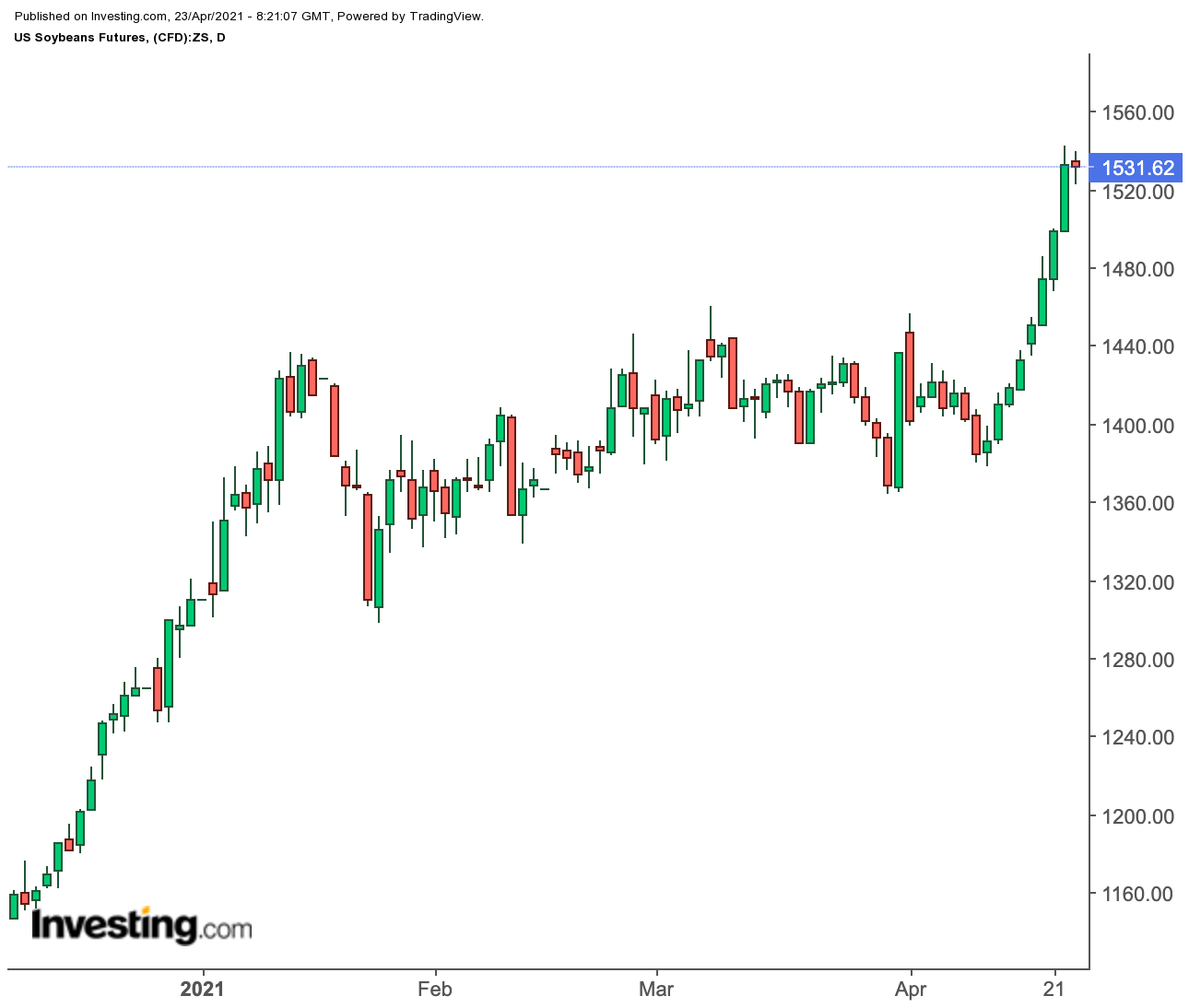 Corn and wheat prices have been rallying on worries about too much dryness in US weather, as well as an unexpected freeze of late. 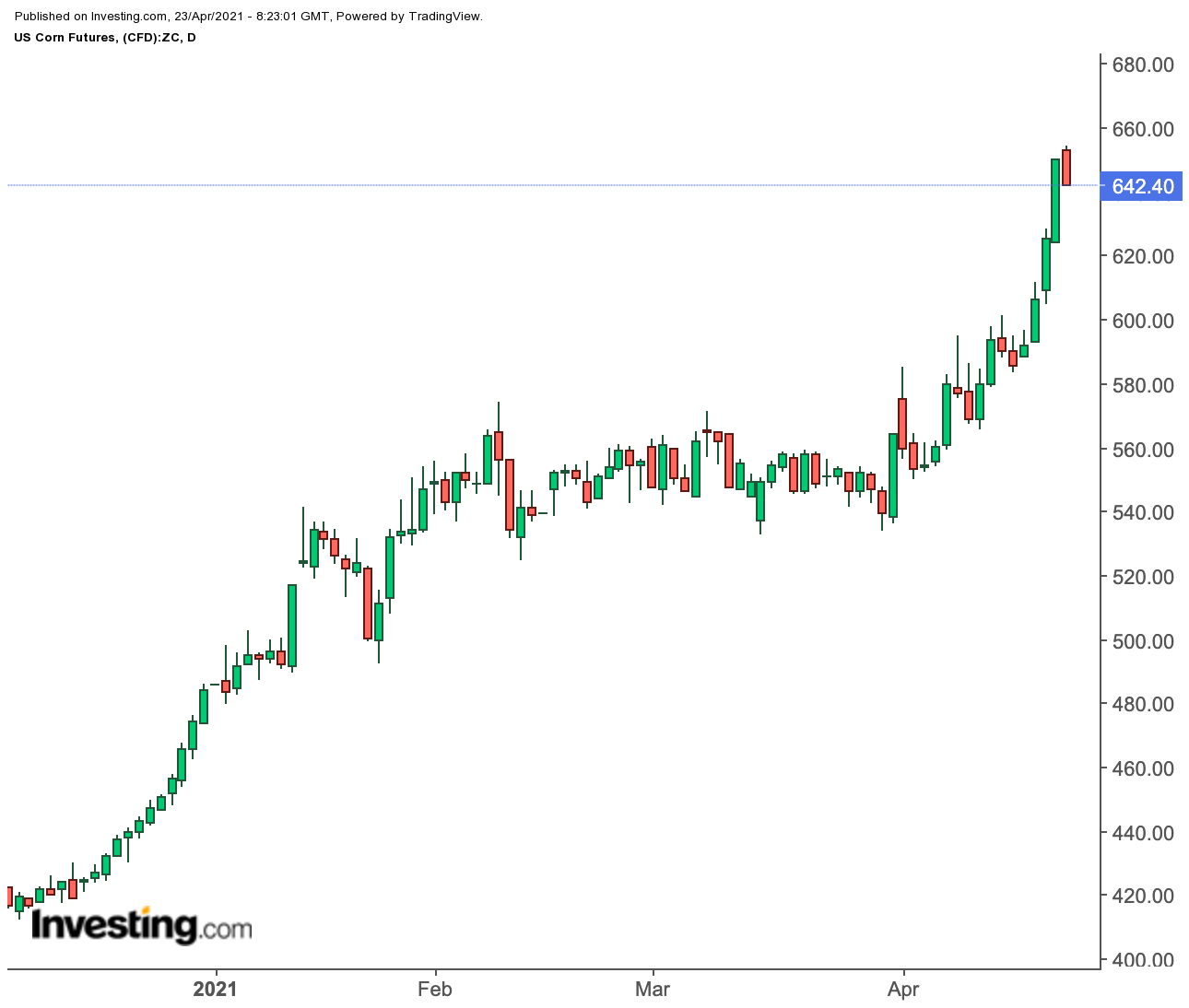 On Wall Street, where analysts have warned for months about overvalued stocks, the industrials-based Dow , the blue-chip S&P 500 and the tech-heavy NASDAQ indexes are headed for their worst week since February amid reports that President Joseph Biden plans high capital gains taxes that could hit stock market investors the most.

Eli Tesfaye, markets strategist at R.J. O'Brien in Chicago, commented on the phenomenon:

“No one’s suggesting that people were pulling money out of stocks this week to put into ags. But if you looked at the screens on Thursday, you’d have seen nerve-shattering drops in equities right after the reports on the capital gains tax surfaced and grains markets going ballistic at the same time. The timing was uncanny.”

Ags 'Not A Bad Place' To Invest Now

But if anything, agricultural markets weren’t a bad place for investors seeking growth, said Tesfaye, who points out that food-based commodities are among the biggest components of inflation now, reflecting price pressures more than even gold .

The trend is likely to continue as the squeeze on the production of crops continues worldwide amid roaring demand from economies finding their feet after the ravages of the coronavirus pandemic.

“Surely, the ags markets aren’t set up to handle the sort of monstrous fund flows that stocks are used to. But it’s certainly worthy for investors to add to that bucket and for those thinking of diversifying, to get in, if they don’t already have a leg there.”

Soybeans Gain Most In Nearly 8 Years

The runaway winner in agriculture this week was soybeans, which hit highs of around $15.43 per bushel as it headed for a weekly gain of almost 7%—the most seen since the 10.2% gain registered during the week to July 13, 2012.

“We have already pushed slightly through the 15 (dollar) mark. Nothing says we would have to stop at this point.”

According to Jack Scoville, chief crop analyst at Price Futures Group in Chicago, the rally in soybeans was driven by inexorable demand from China which was hoarding feed supplies while trying to resuscitate its hog industry that had fallen prey to the African Swine Fever.

A Chinese government report in December said the Sino hog industry was 90% recovered and should be fully rehabilitated by the second quarter. Most US experts disagree with this, but that hasn’t stopped China from buying soybeans in anticipation of the feed demand it would eventually have.

“The market thinks the US is going to run out of soybeans, unless demand can be rationed with high prices. The US does not have a lot of soybeans in the country anymore as most producers have already sold. Buyers are scrambling for what is left.”

The situation wasn’t much better in Brazil, which was also heavily exporting to China, he said. At a projected output of some 136 million metric tons in 2020/21, Brazil is the world’s largest producer of the commodity, while the United States, with its targeted volume of  113 million metric tons is Number 2.

“The Brazil harvest had been delayed due to late planting dates. There was dry weather and now too much rain that has caused harvest delays and some quality problems in the north as well. Harvest activities are done for now and China has been buying for next year here and buying mostly in South America as US internal demand has also been strong.”

Corn futures are heading for a bigger weekly gain than soybeans. But its 12% rise is only the biggest since the week to May 9, 2019. The front-month contract itself hit July 2013 highs above $6.54 per bushel.

“It is currently very cold in the US and some recently-planted corn could get hurt or at least be very slow to emerge. There are also concerns about the production potential for the Safrinha crop in Brazil as growing areas have been warm and dry and look to stay that way longer term.”

Wheat is up almost 10% on the week for its biggest gain since the week to July 3. Wheat also hit a high above $7.13 per bushel during the week, its highest since October 2012.

“Wheat remains a weather market,” Scoville said. “The weather remains too dry in the northern Great Plains and in the Canadian Prairies and farmers have planted into dry soils. It has been very cold and some Winterkill was possible in the central and southern Great Plains. The most damage from the freezing temperatures was expected to be in Oklahoma.”