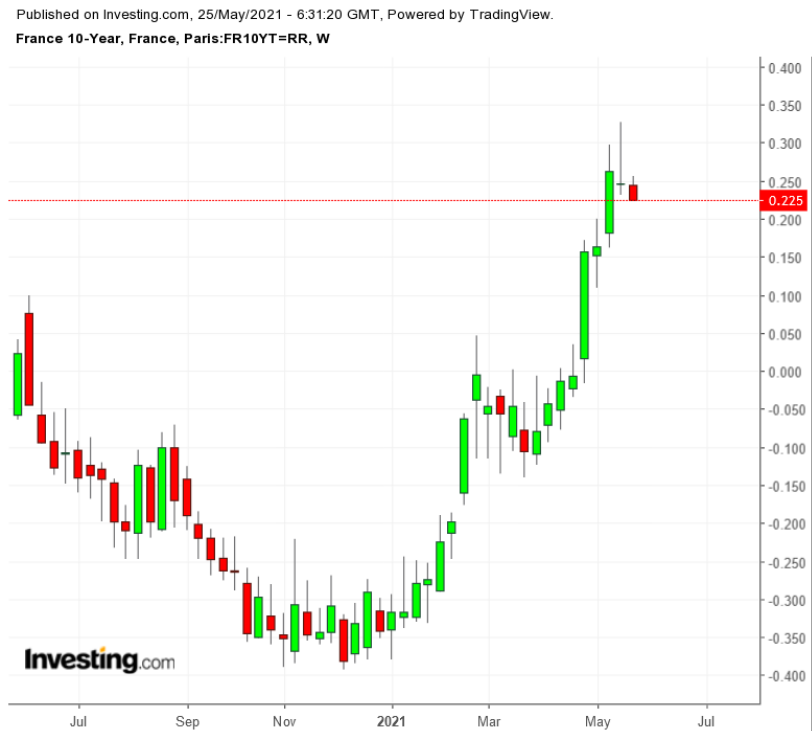 It’s an open question whether that will happen sometime this year or early next year. 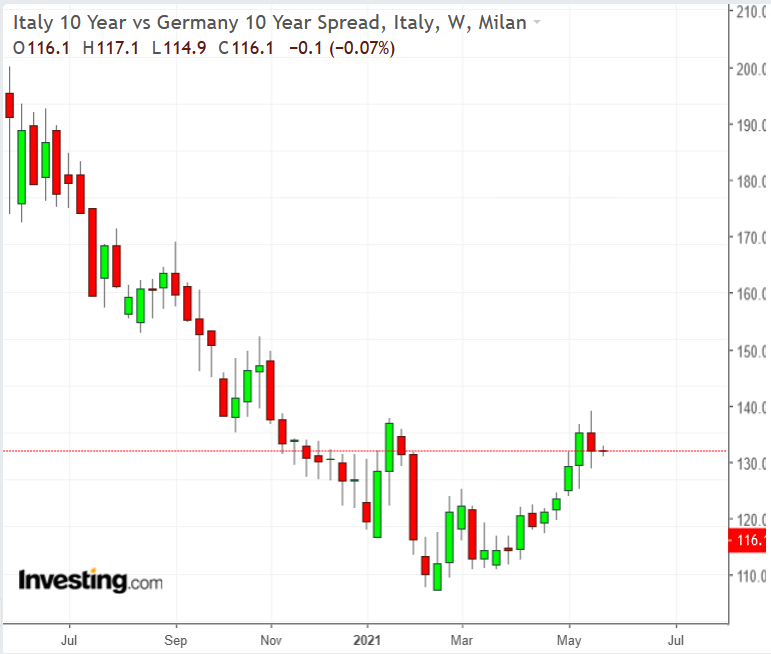 The yield spread between the German 10-year bonds and their Italian counterparts has narrowed to about 116 basis points after hitting above 120 bps last week amid doubts that the government of Mario Draghi could push through reforms required to get funds from the EU recovery program.

European Central Bank President Christine Lagarde said on Friday that it is too early for the ECB to talk about tapering its €1.85 trillion emergency bond purchase program. Her remarks reassured investors and generally dampened yields in Europe’s thin holiday trading on Monday.

The diversion of a Ryanair flight by Belarus air traffic controllers—transparently aimed at detaining an opposition activist—added to the unsettled geopolitical environment and encourage investors to hold onto safe sovereigns.

However, the much-improved vaccine rollout in Europe raised hopes for a strong economic rebound, so that analysts look for yields to continue rising.

European authorities continue to anguish about the level of inflation in the amounts bid for government bond issues, as hedge funds especially pump up their orders to get the amount they want when the final issue is allocated. Oversubscriptions can run to 10 or 11 times the amount on offer, distorting the actual demand.

A French Senate committee report published last week found that bonds sold through a syndicate rather than at auction are prone to this phenomenon as hedge funds seek to capture the premium offered by the lead manager and flip the bonds for that bit of profit.

Government treasuries prioritize long-term investors in these sales, reducing the allocation for short-term investors and motivating them to inflate their bids. The exaggerated demand prompts the governments to adjust the terms, which in turn can deflate the order book by as much as a half.

The EU’s Economic and Financial Committee, which coordinates policies among member states, has set up a working group to investigate this problem.

Oversubscriptions are the order of the day for EU bonds. The bloc has been issuing bonds for its SURE unemployment aid and last week met with strong demand for eight-year and 25-year bonds as this program nears its end.

These social bonds qualify as ESG investments, which investors are eager to acquire. The SURE program has only €5 billion of bonds to issue to bring the total to €94.3 billion, clearing the way for the EU to start issuing up to €800 billion for its recovery program this summer.