On Friday, Sept. 3, it looked like the two leading cryptocurrencies that hold over 60% of the asset class’s market cap, Bitcoin and Ethereum , were heading for new record highs. Ethereum rose to over the $4000 level on Sept. 3. During the long Labor Day holiday weekend that followed, Bitcoin soared to near $53,000 per token.

The most recent rallies in the top cryptos ran out of upside steam on Sept. 7, when El Salvador officially adopted Bitcoin as its national currency. Bitcoin and Ethereum drew chart points as they made lower highs. The bulls view the price action as another opportunity to load up on the cryptocurrencies, while those who believe they have no intrinsic value are saying we told you this would occur.

The volatility in the asset class is unprecedented, creating lots of trading opportunities. However, the potential rewards come with lots of risk in an asset class where extraordinary price variance is the norm, not the exception. Cryptos moved from bullish to bearish trends over the past week in the asset class, where sentiment can be as fickle as the weather.

The steady rally since late July runs into selling

In late July, Bitcoin and Ethereum reached marginally higher lows than at the end of June. 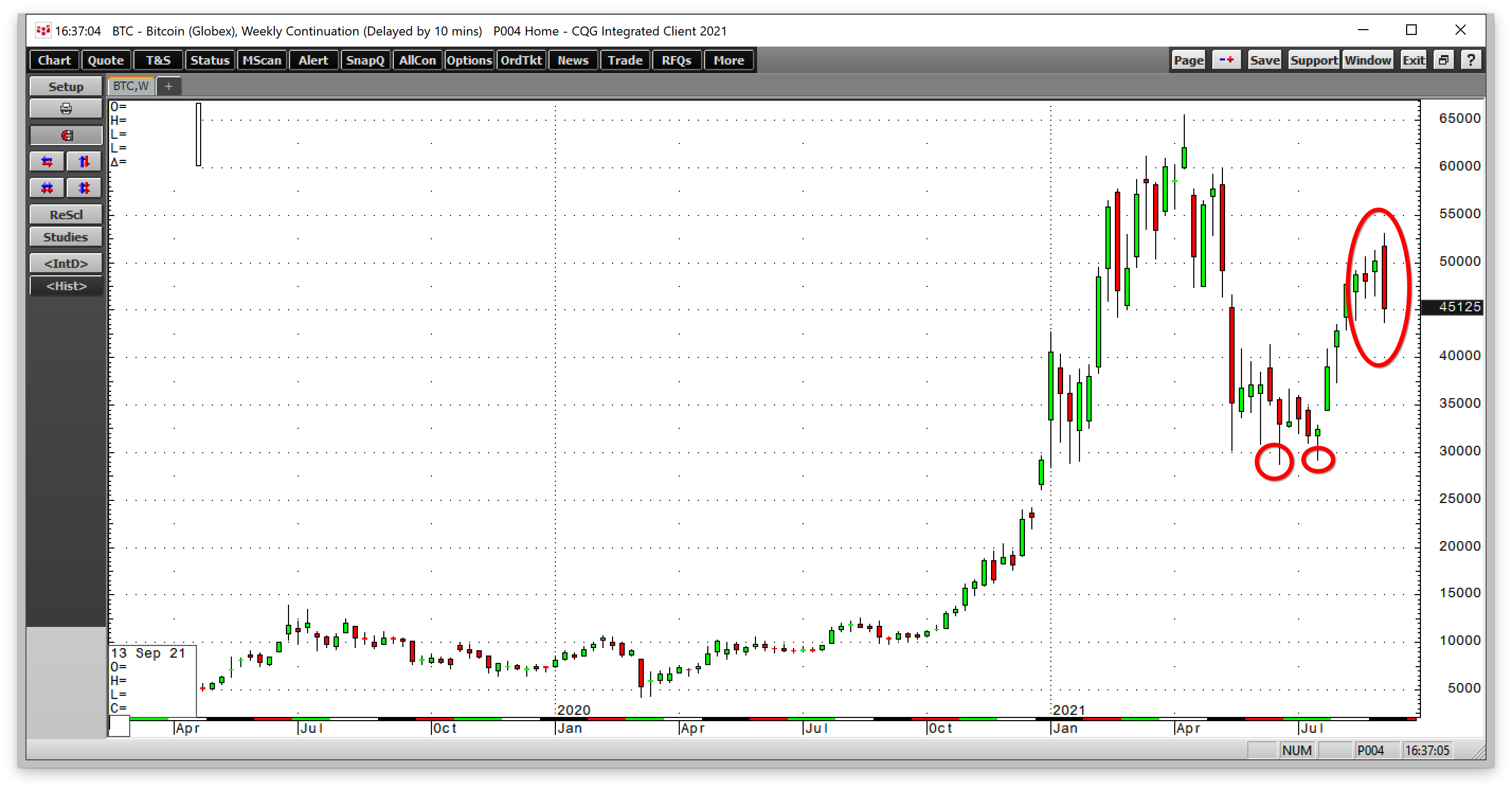 The chart above highlights Bitcoin's low at $28,800 in late June, followed by a low of $29,215 in late July that lit a bullish fuse under the leading cryptocurrency. Bitcoin rose to a high of $53,125 on Sept. 7, when selling hit the market, created a bearish reversal on the daily and weekly charts.

While Bitcoin experienced high volatility, price variance in Ethereum was even more dramatic. Ethereum futures reached a low of $1697.75 in late June. Following Bitcoin, it made a marginally higher low at $1715 in late July when it took off to the upside.

Ironically, Bitcoin plunged on Sept. 7, when it became the official national currency in El Salvador. The Central American nation became the first country to adopt Bitcoin as its means of exchange. El Salvador’s currency had been highly volatile, and the government decided that using the cryptocurrency as legal tender would attract new investments and stabilize its economy.

Salvadorans can download a “Chivo wallet,” an application created by the government that will deliver $30 worth of Bitcoin to promote its use. The International Monetary Fund, the supranational institution that provided an emergency loan to El Salvador in 2020, expressed concerns about the move, citing economic, financial, and legal ramifications.

Some cryptocurrency proponents believe that El Salvador is the first of many countries that will adopt digital tokens. Brazil and Argentina are candidates as the real and peso have been under siege for years. El Salvador is a test case, but the price action on Sept. 7 wasn't the kind of reception the government had hoped for—the price dropped like a stone.

Coinbase runs into a regulatory snag

In other cryptocurrency market developments, last week, the SEC sent a Wells notice to Coinbase. As noted above, COIN is the leading cryptocurrency exchange that listed shares on the NASDAQ on Apr. 14, 2021; the day Bitcoin futures reached an all-time higher at $65,520 per token.

Last week's Wells notice from the US Security and Exchange Commission informed COIN the regulatory agency intended to take the company to court to stop it from rolling out its new Lend product. Coinbase intends to allow customers that hold cryptocurrency tokens to lend them in the market to borrowers that will pay a fee, creating a yield.

The SEC’s move is the first regulatory missile fired at the asset class and could have caused the price decline over the past week. Regulators and legislators are looking to get their hands around the burgeoning cryptocurrency asset class to “protect market participants.”

However, the underlying concern could be the control of the money supply. Cryptocurrencies are a libertarian effort to return the money management from governments, central banks, monetary authorities, and supranational financial institutions back to individuals. Since money is the root of power, many government officials worldwide view cryptocurrencies as a threat to their power.

Another buying opportunity for bulls; An I told you so moment for bears

The bulls undoubtedly believe the most recent price correction in Bitcoin, Ethereum, and a host of other cryptos is another buying opportunity on the road to higher prices. Opponents are waving a warning finger, saying that the price action is a sign of instability on the road to obscurity.

Bulls and bears make for an active and liquid market, so the opponents and proponents will likely fuel a continuation of active trading and volatility. Price variance creates a paradise for traders but can be a nightmare for investors.

The cryptocurrency asset class remains in its infancy. The short-term picture is one of lower highs since the April and May peaks. The medium-term remains bullish as the appreciation has been nothing short of parabolic.