As technology stocks exploded to remarkable heights in the 1990s, Fed chief at the time, Alan Greenspan, called the price action “irrational exuberance.” But today, that term seems too mild for the trajectory of the digital currency asset class over the past months and years.

In 2010, a Bitcoin token sold for five cents. At the recent high of over $65,500 on Apr. 14, a one-dollar investment back then in the leading cryptocurrency was worth over $1.3 million. 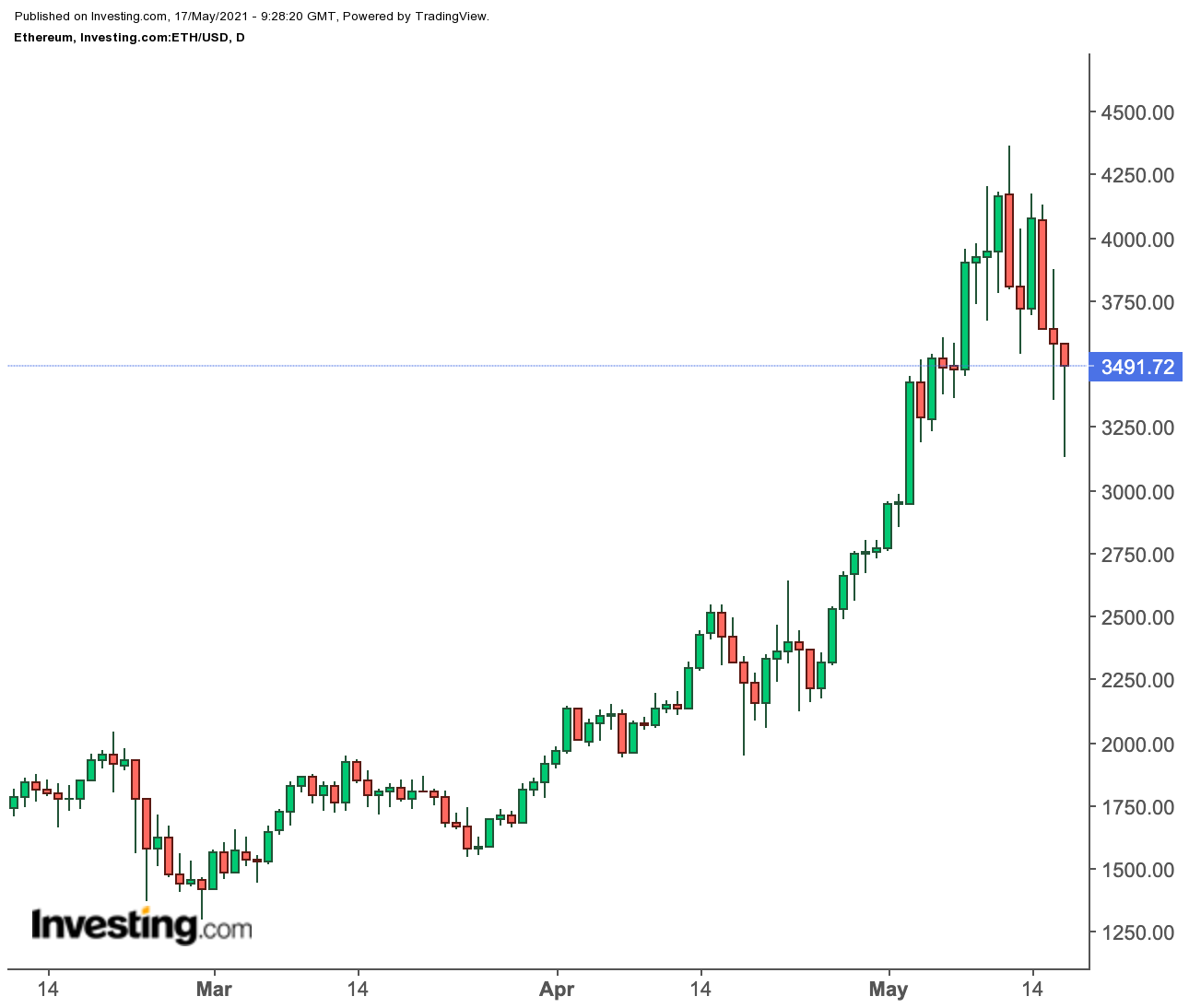 While incredible returns in cryptocurrencies are more than bubblicious, the asset class’s market cap at the $2.4 trillion level was only slightly higher than the leading publicly traded company, Apple (NASDAQ: AAPL ). As of the end of last week, APPL’s valuation was at the $2.085 trillion level. For an entire asset class, a market cap of $2.29 trillion may not signal bubble territory, according to many of the market’s devotees.

Digital currencies are a libertarian response to government control of the money supply. Many see these tokens as the offspring of our technological era, since cryptocurrencies reflect a shift towards Fintech.

When it comes to “irrational exuberance,” the rise in their value has created an environment of greed where market participants are investing in tokens and hoping for Bitcoin-like returns. The latest digital currency success story has been Dogecoin , which began as a joke. 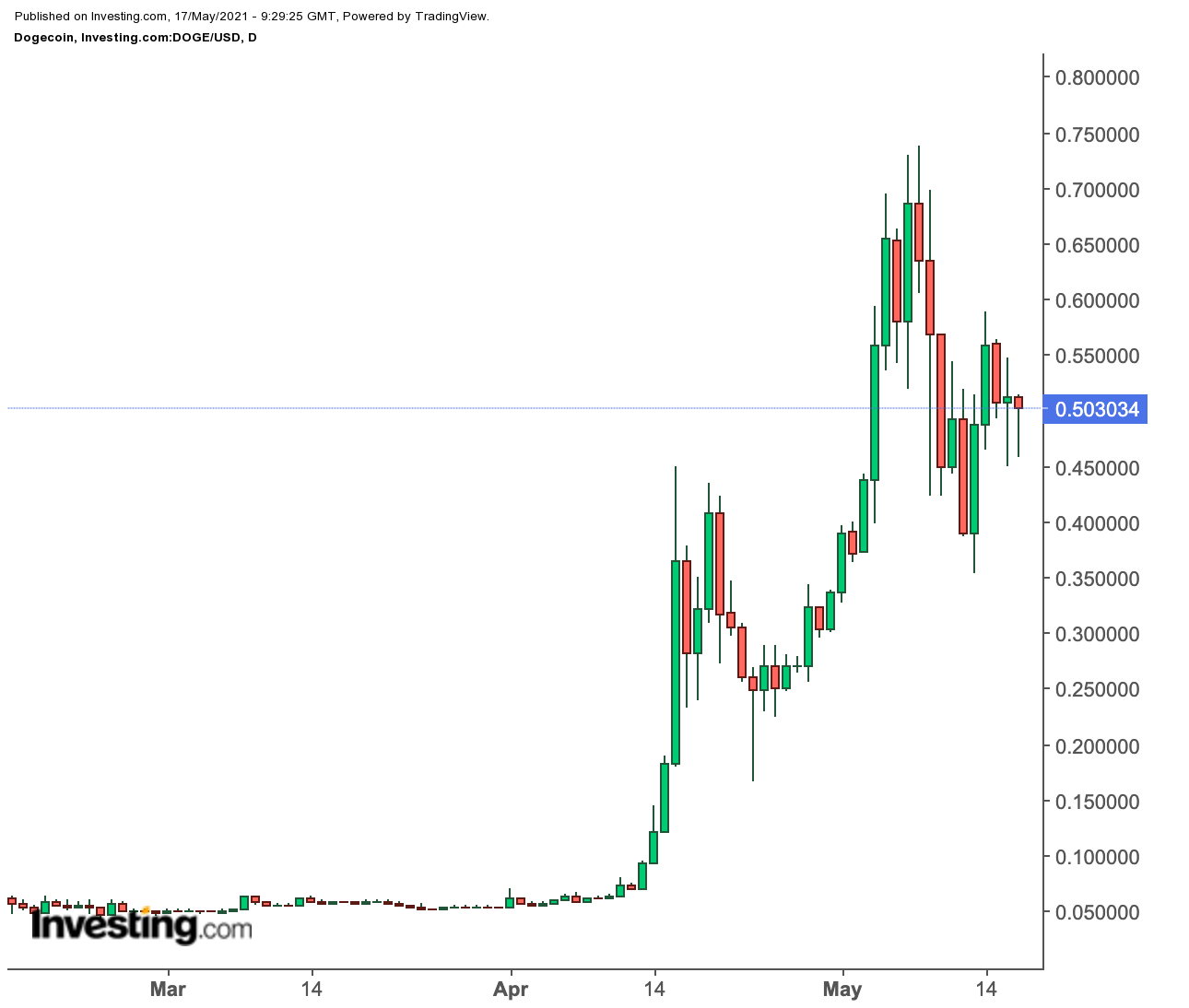 After trading at a fraction of a cent in late 2020, the price, at the end of last week, was over the 54 cent level. The digital token's market cap was over $70 billion, making Dogecoin the fourth leading crypto, which is far from a joke.

Each day, the cryptocurrency asset class is reaching new levels of acceptance. Regulators in the US and Europe will need to decide if the asset class is a commodity, a currency, or something else. Meanwhile, time will tell if the price appreciation is a bubble or a new frontier that will change the way money flows worldwide.

Are cryptos currencies, commodities, or something else?

In 2017, when the CFTC decided to allow the Chicago Mercantile Exchange (CME) and other exchanges to list Bitcoin futures , it took the position that the cryptocurrencies were commodities. It is challenging to pigeonhole the burgeoning asset class as they have idiosyncratic characteristics similar to commodities, given their penchant for price volatility.

At the same time, there is broad agreement that blockchain technology, the child of Bitcoin, revolutionizes payments and record keeping. The tokens that gave birth to Fintech is another story.

In 2017, JP Morgan Chase’s CEO, Jamie Dimon, said that Bitcoin and digital currencies were a “fraud.” At the time, he said that anyone at his bank caught trading Bitcoin or the other novel instruments would be fired on the spot.

Four years later, Jamie Dimon is singing a different tune as JP Morgan Chase (NYSE: JPM ) is opening a fund for its high net worth customers to invest in cryptocurrencies. Meanwhile, Mr. Buffet appears to be sticking to his guns. This month, his partner, Charlie Munger, doubled down by saying that digital currencies are “disgusting and contrary to the interests of civilization.”

There are now futures contracts on Bitcoin and Ethereum trading on CME. On May 3, the CME rolled out a micro Bitcoin contract with lower initial margin requirements to increase the addressable market for trading.

Coinbase’s (NASDAQ: COIN ) listing on NASDAQ made the platform for over-the-counter digital currency trading, investing, and services, a publicly traded exchange worth nearly $48 billion at $258.37 per share at the end of last week. Meanwhile, the CME and Intercontinental Exchange (ICE), two leading traditional exchange platforms, had market caps of $77.92 billion and $63.74 billion, respectively. It took the CME and ICE around two decades to reach these market caps; COIN did it in one month.

On Apr. 14, COIN’s market cap reached an incredible $100 billion on the first day of trading.

No one is arguing that cryptocurrencies are not a unique asset class. The demand for Bitcoin, Ethereum, and the other over 9,820 coins and growing is rising. The market cap was over the $2.29 trillion level last week as it recently rose above the world’s leading company, Apple.

Regulators need to define this asset class before they can regulate it effectively. One of the global regulatory environment's critical issues is that the philosophy that underlies cryptocurrencies is a libertarian rejection of government involvement in money.

This ideology could be a challenging hump to overcome. Once past that issue, custody and security are issues.

On the face of it, the recent hack of the Colonial pipeline that brings gasoline to the US East Coast may have nothing to do with cryptocurrencies. Still, it raises the issue of computer hackers’ ability to crack into energy flows critical to a country’s national security.

Custody and security for computer wallets holding trillions in value is a substantial, and in some ways similar issue facing regulators, who see their job as “protecting the public.” Moreover, it may not be in a government’s best interest to give up control of the money supply as the use of cryptos in the global financial system grows.

After all, controlling short-term interest rates, influencing rates further out along the yield curve, and the ability to expand or contract the amount of currency in the financial system are critical monetary and fiscal policy tools. Indeed, regulators have their hands full defining the cryptocurrency asset class as it does not fit easily into any existing regulatory verticals.

Blockchain is changing past business notions

Blockchain is a complex core component of the digital currency asset class. However, it is a basic and straightforward notion that also drives Fintech. A blockchain is a list of transactions that anyone can view and verify. It is transactional history.

The Bitcoin blockchain contains a record of every time a party sent or received Bitcoin. Almost all cryptocurrencies are secured via blockchain networks, but blockchain has applications far beyond the cryptos.

Payments via blockchain are more secure than standard debit or credit card transactions. Moreover, accuracy is constantly verified by a massive level of computing power, increasing the speed and efficiency of the payment system.

The blockchain also eliminates the need for third-party processors. Sensitive information is omitted, providing a level of identity protection. While no system is foolproof, blockchain technology is the core concept of Fintech and improves the antiquated way of doing business.

US SEC likely to take a leadership role, but that might not be sufficient

Gary Gensler is now the Biden Administration's Securities and Exchange Commission (SEC) Chairman, and he is no stranger to Fintech. Under his stewardship at the Commodity Futures Trading Commission (CFTC) during the Obama administration, Gensler vetted Bitcoin futures that appeared on the CME in late 2017. During his hiatus from the regulatory community, he was professor Gensler at MIT, teaching a Fintech course.

At the SEC, he is not in the hot seat for creating a regulatory protocol for cryptocurrencies. As the interest in the sector expands, more companies now accept cryptos as payments. And Coinbase is now a publicly traded exchange.

The SEC is currently vetting applications for cryptocurrency ETF and ETN products. Once approved, they would likely exponentially increase the addressable market for trading and investing.

The Fed Chairman, Jerome Powell's answer to a question about a digital dollar will probably also define the SEC’s approach under Chairman Gensler. In late April, Powell said it is important not to rush but rather to get it “right.”

The process for ETFs and ETNs is likely to move at a snail’s pace at the SEC as they attempt to define precisely in what financial vertical cryptos belong. They have characteristics of commodities and currencies but are different as well. We could see the SEC pass the ball with a recommendation to create a Fintech regulator independent from the CFTC and SEC.

While the US is a leader in the global economy, cryptocurrencies transcend borders. Any regulatory effort would be incomplete if it did not have cross-border coordination and cooperation. Though the US, EU, UK, and Japan would likely cooperate on the regulation of digital currencies, China, Russia, and other countries could pose more than a challenge.

A global regulatory approach would be like herding cats with conflicting interests from vastly different political and economic systems. The potential for global harmony is a pipedream.

The wild ride is likely to continue; Governments and regulators hold the key to cooling the volatility

If Charlie Munger has his way, governments will outlaw the cryptocurrency asset class. While US Treasury Secretary Janet Yellen and European Central Bank President Christine Lagarde consistently cite the nefarious aspects of the asset class, their true motivation is likely to retain power through control of the money supply.

Government officials favor the status quo, declining to shift towards a global currency market that transcends their influence and strips power from policymakers. Nonetheless, China is proceeding in rolling out a digital yuan. The US and EU are likely to follow, albeit slowly.

Meanwhile, governments and regulators hold the key to cooling volatility. The highest the digital currency market cap grows, the greater the pressure to regulate will become.

However, any event that undermines the asset class over the coming weeks or months would give regulators more time. In 2014, the Mount Gox hack slowed down Bitcoin's growth for a few years. Last week’s Colonial pipeline hack in the US is a warning to those holding substantial wealth in computer wallets that they are not secure.

I see three significant aspects to the Fintech revolution and the rise of cryptocurrencies:

Human nature drives us to markets that offer fantastic returns and “easy money” whether that seems believable or not. Over my lifetime, few markets have moved to levels where a one-dollar investment could be worth over $1 million in the space of eleven years.

The potential of those types of returns and a market with over 9,800 tokens will continue to fuel a speculative frenzy until the asset class is defined, regulated, and controlled—if that is possible. While cryptocurrencies face more than a few issues, the ideology and philosophy that rejects government control could be a wall too high to scale.

Are cryptocurrencies a bubble or a new currency frontier? They may be a bit of both wrapped in an enigma that questions economic and political conventions.