The growing prospect of a slowdown in the world’s top two economies will likely weigh on oil again this week, extending its volatility, while gold tries to cling to the key $1,800 level despite its vulnerability to the mighty dollar . 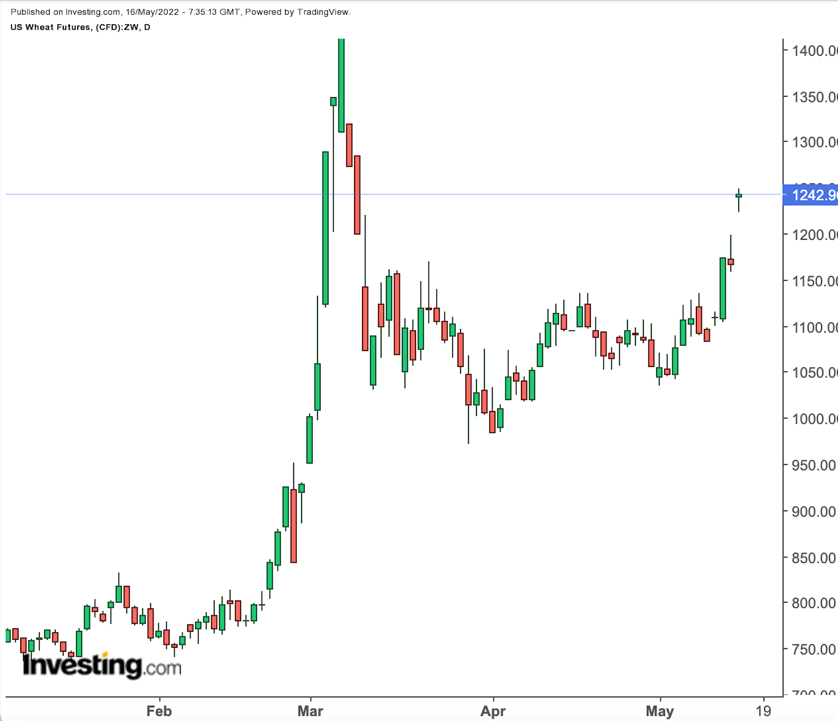 An unexpected development for the week is in wheat , which hit 14-year highs on news that India had banned exports of the grain due to domestic supply squeeze.

Crude markets started Monday’s early trade in Asia on a bouncy note, before turning red within hours as poor data from China including retail sales, industrial production, and unemployment hit sentiment in oil. 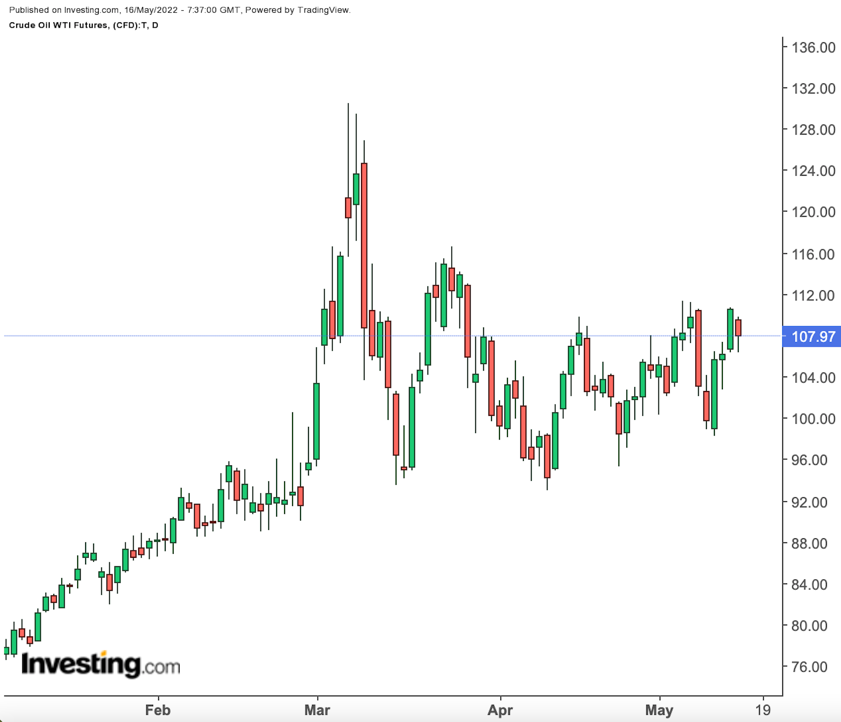 Just last week, crude prices took a 10% knock early in the week on fears of a potential US recession, before finishing the week little changed.

Pulling off another recovery like that this week could be more complicated in the face of the situation in China, the world’s largest oil importer.

“Ongoing lockdowns were a terrible problem for many economies in 2020 and into 2021,” economist Eamonn Sheridan said on the ForexLive forum.

“It's a shame China has not been able to address COVID-19 outbreaks as we have moved towards the middle of 2022.”

The data took on a new meaning for the oil when China also announced that it processed 11% less crude oil in April than a year earlier, with daily throughput falling to the lowest since March 2020 as refiners slashed operations on weaker demand due to widespread COVID-19 lockdowns.

The bureau said the impact of COVID is temporary and that the economy “is expected to stabilize and recover.”

“So far, $98 WTI has proven to be a hard floor, while $104-$106 keeps the momentum up,” said Sunil Kumar Dixit, chief technical strategist at skcharting.com.

Dixit added that a decisive break below $98 will invalidate the bullish momentum.

Record prices of gasoline at above $4.50 per gallon and diesel at over $6 in the United States—amid aggressive rate hikes by the Federal Reserve to beat the worst inflation in 40 years while the global supply of crude continues to tighten—has created an extraordinary dynamic for oil in the country.

The gross difference now between crude and refined oil prices is the result of an exacerbated supply-deficit coupled with demand that’s almost back to pre-pandemic highs. US East Coast stockpiles of diesel have fallen to 1990 lows. Outside China and the Middle East, oil distillation capacity fell by 1.9 million barrels a day from the end of 2019 to today—also the largest decline in 30 years. European diesel supplies are being choked as well by the West’s sanctions on Russian energy products.

US economic data this week will be closely scrutinized as investors try to gauge whether aggressive tightening by the Fed to curb soaring inflation will result in a hard or soft landing for the economy.

Tuesday’s retail sales figures for April are expected to show solid gains, thanks to steady auto sales. Economists are forecasting a 0.8% increase after a 0.7% rise in March, despite higher inflation.

The US is also to release regional data on manufacturing activity along with reports on housing starts and existing home sales . Housing data is expected to cool as a result of rising mortgage rates.

Fed Chair Jerome Powell is to speak on Tuesday and is expected to reiterate that the US central bank will hike rates by half a percentage point at each of its next two meetings.

Gold, meanwhile, edged up on Monday from a more than three-month trough hit in the previous session, as lower US Treasury yields kept demand for zero-yield bullion afloat above the key psychological support level of around $1,800 per ounce. 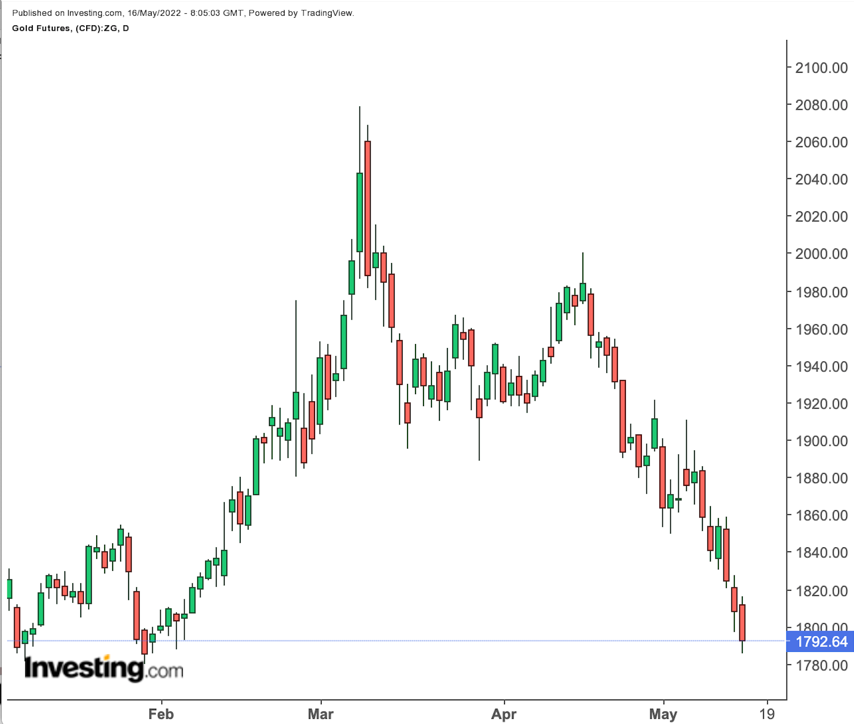 Despite Friday’s rebound from the lows, gold could revisit $1,700 territory if it fails to clear a string of resistance from $1,836 to $1,885, Dixit of skcharting.com.

“Since the current trend has turned bearish, sellers are very likely to come at the test of these resistance areas,” said skcharting’s Dixit, who uses the spot price of gold for his analysis.

On the wheat front, India initially announced a blanket ban on wheat due to a domestic supply deficit. But it later said it would keep a window open to export the grain to food-deficit countries at the government level.

Wheat for July delivery on the Chicago Board of Trade hit a session high of $12.49 per bushel on the ban, a peak since the $12.98 reached in March 2008—just months before the financial crisis that erupted that year.

“The $2 long consolidation in wheat has concluded a firm breakout above the $11.50 - $11.80 range and approached the $12.00 perch, settling for the week with a strong momentum,” said skcharting’s Dixit.