Oil could slip further from recent highs this week, with inflation worries consuming the powers that be in America, as policymakers from Congress to the White House mull ways to curb price pressures which are growing at their fastest pace in over 30 years. 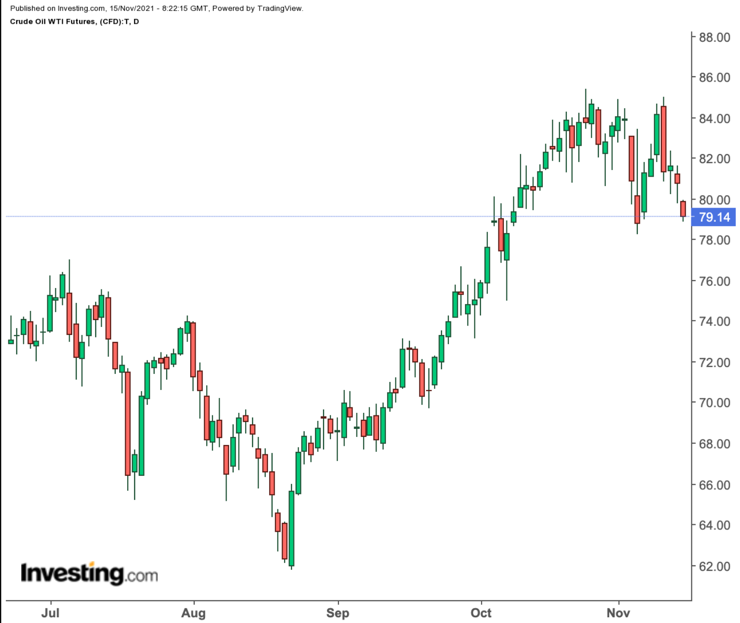 Gold , meanwhile, is getting more chances by the day to act like the inflation hedge it is supposed to be, sticking firmly to mid-$1800 levels, as investors cling to bullion despite its rival, the dollar hitting 16-month highs. 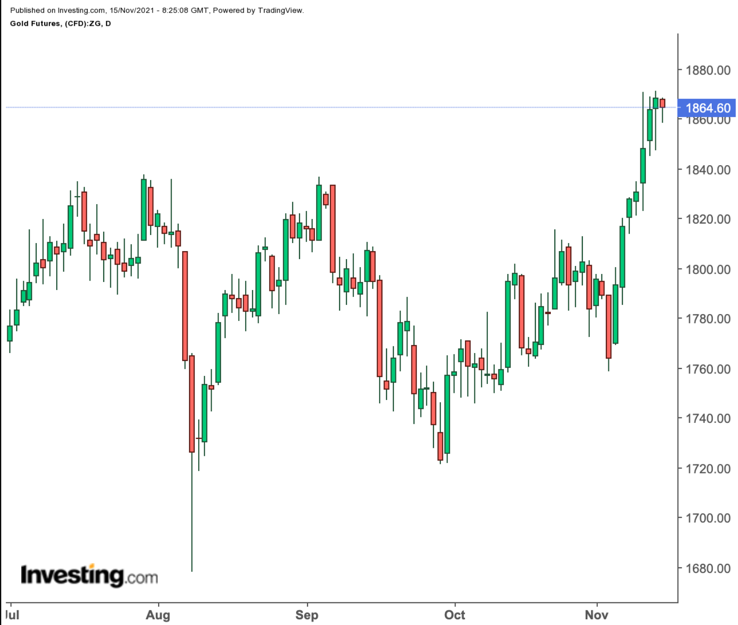 On the oil front, in a letter last week, eleven Senate Democrats urged President Joseph Biden to tap the Strategic Petroleum Reserve (SPR) and ban crude exports from the United States in order to add to immediate supply, which could bring down pump prices from seven-year highs.

‘Let’s Get Gas Down Right Now’

Senate Majority Leader Chuck Schumer added to that clarion call on Sunday, saying “no industry is spared” of inflation “but fuel gasoline is the worst of all."

"Let's get the price of gas down right now. And this will do it," Schumer said, referring to the proposed SPR draw.

Investors are also betting that the Federal Reserve will have to raise US interest rates sooner than indicated to stop inflation spiraling upward.

Biden has been under increasing pressure to act against inflation after the Labor Department reported last week that the US Consumer Price Index , which represents a basket of products ranging from gasoline and health care to groceries and rents, rose 6.2% during the year to October.

It was the fastest growth in the CPI since November 1990, an acceleration driven mostly by gasoline.

The University of Michigan, in its closely-watched consumer poll released last week, said sentiment among consumers—who account for 70% of the US economy—was at a decade low mainly due to inflation concerns.

The White House was expected to announce a SPR drawdown last week. But it held back after the Short-Term Energy Outlook from the Energy Information Administration said global crude benchmark Brent will likely finish the year at around $82 per barrel before sliding $10 next year.

“If the Biden administration was waiting for the EIA to give them a good reason to tap the SPR this week, they did not get one,” said Ed Moya, analyst at online trading platform OANDA.

Weighing against an SPR release are concerns that the United States could use up a substantial part of its crude reserves and still not get the price of crude down meaningfully. This is partly due to fears that global producer group OPEC+ could further reduce its supply to the marketplace to offset attempts by the US government to pull the market lower.

With crude prices just about $20 or more from hitting $100 per barrel, OPEC+ appears unwilling to squander the best chance it has of getting the market back to three-digit pricing for the first time in seven years.

In order not to be pressured to pump more oil than it intends, OPEC+—which groups the 13-member Saudi-led Organization of the Petroleum Exporting Countries with 10 other oil producing allies steered by Russia—even downgraded demand for its own crude in the fourth quarter.

In Monday’s Asian trading of oil, US crude’s benchmark West Texas Intermediate was down 41 cents, or 0.5%, at $79.28 per barrel by 05:30 GMT, after losing 4% over three previous weeks. WTI hit seven-year highs of $85 per barrel in October and remains up about 63% for the year.

This week could be an edgy one for risk markets as investors look toward the latest US retail sales figures along with earnings results from major retailers, including Walmart.

US retail sales are expected to show a 1.1% gain after a 0.7% rise in September, according to a consensus of estimates by analysts tracked by Investing.com. But based on recent inflation figures, it is also possible that the figure might disappoint.

The economic calendar also features data on industrial production on Tuesday, reports on housing starts and building permits on Wednesday and the weekly figures on initial jobless claims on Thursday.

The latest set of economic data out of China on Monday is expected to confirm a slowdown in its economic recovery, just as Europe is experiencing a fresh surge in COVID-19 infections.

Europe is seeing a resurgence of the COVID-19 pandemic, adding to headwinds for the region’s already fragile economic recovery.

Europe accounts for more than half of the average 7-day infections and about half of the latest deaths globally, according to data compiled by Reuters, the highest levels since April last year when the virus was at its initial peak in Italy.

Several countries, including the Netherlands, Germany, Austria and the Czech Republic are implementing restrictions or planning fresh measures to slow the spread.

Holland entered a three-week partial lockdown on Saturday, the first in Western Europe since the summer. Germany reintroduced free COVID-19 tests on Saturday, just one month after the government stopped paying for them, and Austria is to decide on Sunday whether to impose a lockdown on people who are not vaccinated.

Meanwhile, UK employment numbers will be closely watched after the Bank of England said it wanted more evidence of improvement in the labor market when it surprised markets by failing to deliver a widely expected rate hike earlier this month.