The Chicago Mercantile Exchange (CME) operates contract markets for the trading of futures and options on futures contracts worldwide. The CME offers futures and options products on a wide range of financial and commodity products via its electronic platform. In late 2017, the CME rolled out futures on Bitcoin . When it introduced futures, the price of the leading cryptocurrency rose to its first record peak at over $20,000 per token.

On Feb. 8, 2021, the CME took the next step into the digital currency arena with the listing of Ethereum futures . Since they began trading, Ethereum tokens have risen to a series of all-time highs.

Futures exchanges like the CME make money from trading volumes. Liquidity is critical for success. While Coinbase (NASDAQ: COIN ), the newly listed digital currency exchange platform, poses a threat to the CME’s products, COIN does not offer futures. Rather, it's a platform for trading, investing, and infrastructure in the crypto economy. Both the CME and COIN stand to profit from volume and liquidity.

The CME’s next step to expanding its contract market in digital currencies is introducing micro Bitcoin futures contracts, which are one-tenth of the size of one Bitcoin. The new micro contracts began trading on May 3 and should expand the addressable market for the cryptocurrency.

Each new product or event has led to a new high

Beginning in late 2017, each new product or event in the digital currency arena has led to new and higher highs. The CME futures in late 2017 pushed the price of Bitcoin to its first dramatic peak at over $20,000 per token. In late 2020 and early 2021, considerable investments by Square (NYSE: SQ ) and Tesla (NASDAQ: TSLA ) moved Bitcoin’s price higher, as did the acceptance of tokens for goods and services by an increasing number of companies.

On Apr. 14, Coinbase listed its shares on the NASDAQ . The IPO of the platform that solely handles cryptocurrencies pushed Bitcoin to its latest record peak at $65,520 per token. After a correction to the $47,395 level in mid-April, the price was back near the $57,000 level on May 3 when the CME rolled out its newest product, micro Bitcoin futures.

The standard Bitcoin futures contract that rolled off the CME’s product shelf in December 2017 contained five Bitcoins. At the recent high, the contract value soared to $327,600.

The chart highlights that weekly historical volatility has routinely moved over the 100% level in the Bitcoin futures market. The high level of price variance demands sufficient margin requirements to address the risk of trading from the long or short side. The original margin requirement for Bitcoin futures rose to the $160,000 per contract level, limiting market participation in the digital currency futures arena.

On May 3, micro Bitcoin futures burst on the scene. Each micro contract reflects the price action in one-tenth of a Bitcoin. At the $58,000 per token level, the nominal contract size of the micros is around $5,800. The initial margin level as a percentage of the nominal contract size remains at a very high level, but $2,500 or so per contract protects the exchange, clearinghouse, and market participants while broadening the addressable market for Bitcoin futures.

The world has not seen a bull market in any asset in my lifetime like the ascent of Bitcoin.

While the monthly chart of CME Bitcoin futures shows the impressive rally since late 2017, where the price more than tripled at the recent high, it only reveals a small part of the story. 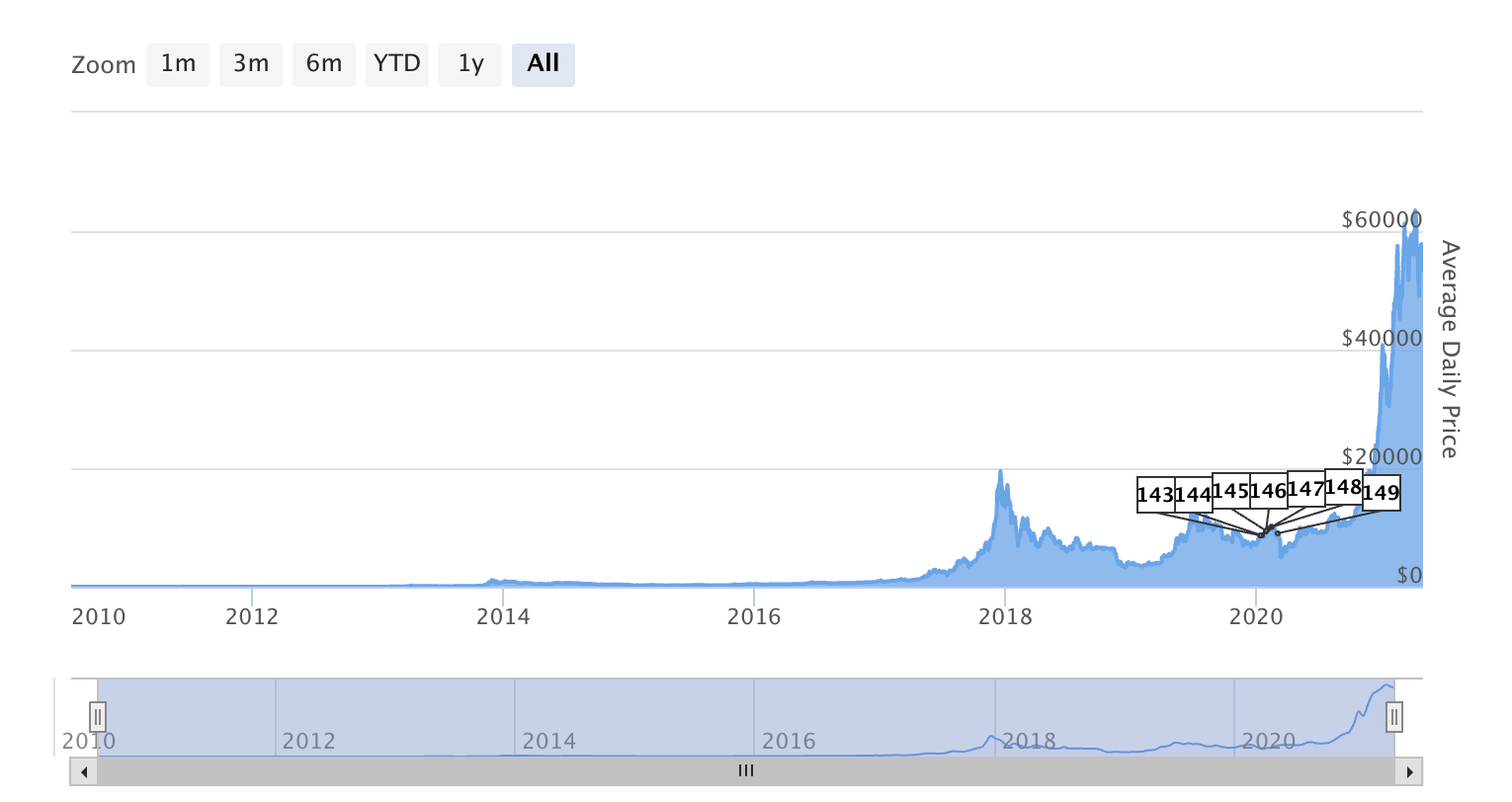 Parabolic bull markets can rise to heights that are irrational, illogical, and unreasonable. Forecasting Bitcoin’s price amounts to little more than throwing a dart at a dartboard, given its volatility.

A recent article on Forbes opined that Bitcoin could hit $400,000 per token by the end of this year. It's impossible to pick tops in bull markets or bottoms in bear markets. The crude oil market showed us that on the downside last year, on Apr. 20, when the price briefly fell below negative $40 per barrel.

The only forecast I can make is that market trends are potent forces that guide the path of least resistance for all asset prices. The bullish trend in Bitcoin remains firmly intact. However, history suggests that it awaits another event that would thrust it back into the stratosphere of higher highs.

ETFs could light the ultimate bullish fuse; the SEC will take a cautionary approach

Micro Bitcoin futures should increase liquidity for investors and traders, but futures remain a niche platform with a limited overall addressable market.

Bitcoin and the other thousands of digital currencies await the SEC’s approval of ETF and ETN products that would undoubtedly turbocharge the price action to a new level.

ETFs trade on the stock market, which makes them available to the broadest audience of market participants. Given the interest from younger investors, Bitcoin and digital currency ETF and ETN products may increase the overall level of participation in the stock market.

The decision is now in the capable hands of SEC Chairman Gary Gensler. As the head of the CFTC under the Obama administration, Chair Gensler oversaw the early days of approval for the CME’s Bitcoin futures contract. After his tenure at the CFTC, he taught a Fintech course at MIT, making him a true Fin-techie.

Meanwhile, at the SEC, Chairman Gensler’s primary concern will be protecting the investing public. The volatility in digital currency prices is a reason for proceeding with extreme caution.

At his latest press conference in late April, Fed Chairman Jerome Powell was asked about his view of the dollar becoming a digital currency. His answer was likely in lockstep with Chairman Gensler’s approach as the Fed Chair said, “It is far more important to get it right than to do it fast.”

Expect the same process from the SEC for ETF and ETN products on Bitcoin and other digital currencies.

Micro futures at the CME should increase the addressable market for Bitcoin and the asset class. However, the ETF/ETN market is the 800-pound gorilla that could ignite another period of speculative frenzy, pushing prices to higher highs.

Meanwhile, the trend is your friend, and it is bullish, but historical volatility that routinely moves above the 100% level is a reason for extreme caution.