While the world has been vexed over the spike in oil prices in recent days, amid the U.S.-Iran conflict and speculation about whether OPEC would raise production if the rally continued, a different cartel was quietly working to boost the prices of another commodity.

For those who missed it, here’s the story: Ivory Coast and Ghana, the West African nations which together produce about two-thirds or more of the world’s cocoa, have formed their own chocolatey version of the Organization of the Petroleum Exporting Countries (OPEC).

The Wall Street Journal published a long piece on the cocoa cartel saga at the weekend. But here’s the short take: The initiative hasn’t yet sent cocoa prices into the stratosphere. If anything, the West African partnership — already dubbed “COPEC” by some in government and industry, according to the Journal — has witnessed a slide in cocoa prices since the New Year began. 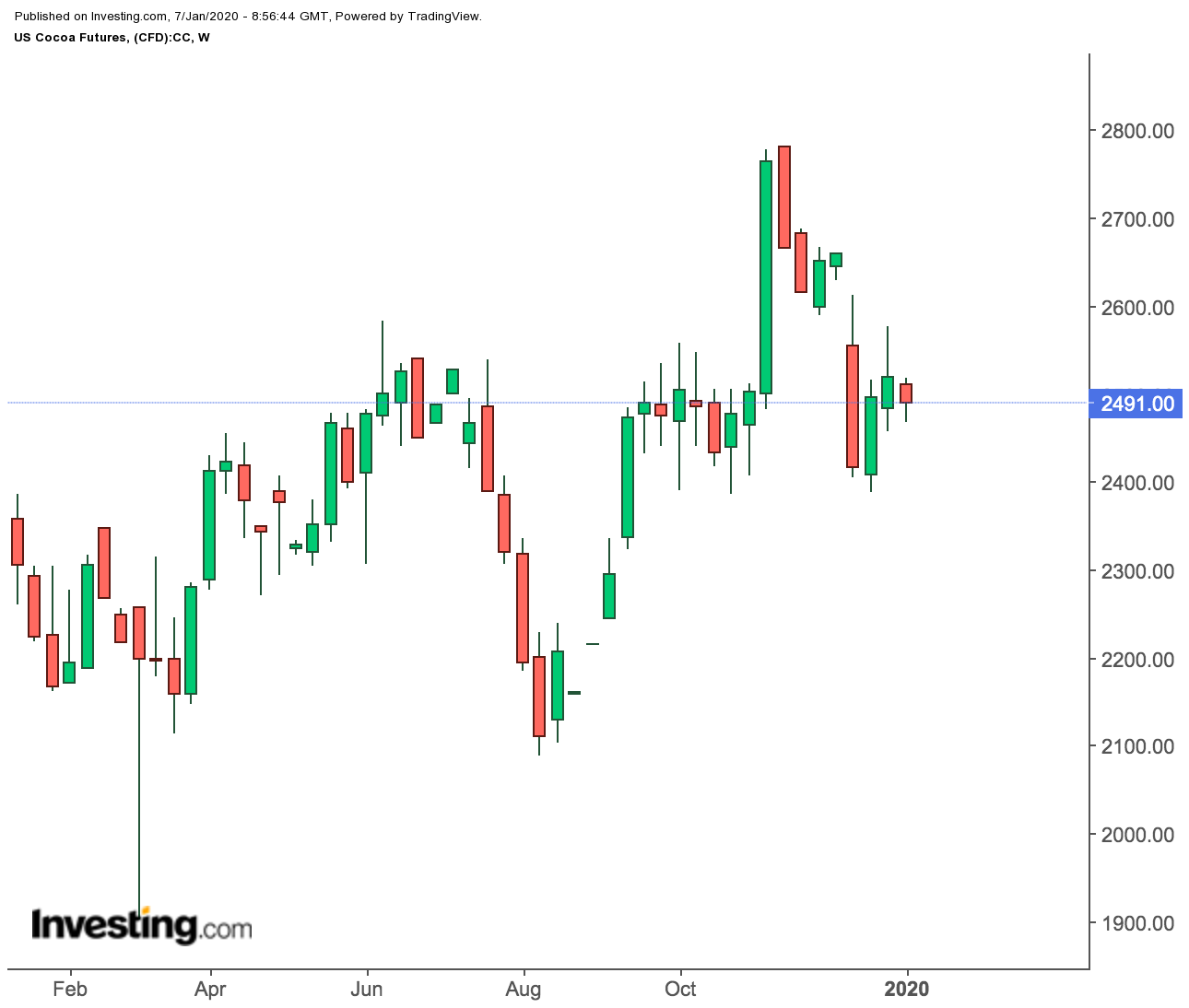 “Prices have been cheaper lately based on ideas of very good production potential in West Africa,” said Jack Scoville, a Price Futures Group analyst in Chicago for “soft” commodities that include cocoa, coffee , sugar and orange juice .

In a market commentary written Monday and shared with Investing.com, Scoville said weather in Ivory Coast had improved for cocoa, from frequent showers.

“Ideas are that the next crop will be good,” he wrote.

“Drier weather is now more important due to harvest activities. The harvest is ongoing amid showers, but good progress in the harvest is expected at this time.”

“The weather in Asia is also called good,” Scoville added.

In Asia, cocoa is grown in Malaysia, India, Vietnam, the Philippines and Thailand. While Malaysia has a 250-year history with cocoa and was once its third biggest producer, the other countries in the region are fairly new to the crop, though they have potential to become important growers over time.

So, what’s the story with this so-called COPEC?

Cartel’s Idea Is To Charge A $400 Premium

The Journal says the two-nation cocoa cartel wants to charge an extra $400 for a metric ton of cocoa. That’s a 16% premium over New York cocoa, which settled on Monday at $2,491 a ton, and nearly 17% above London cocoa, which hovers at just under 1,800 pounds ($2,376) a ton — depending which side of the world prices the raw ingredient for your chocolate.

Of course, it’s not just candy bars that could get pricier. Ice cream — made from cocoa butter, the smooth velvety product that comes from the grinding of cocoa beans — and biscuits and other baked goods — produced from cocoa powder which also emerges from grinding — will get more expensive too.

The question is when that could happen.

Most big cocoa users strike cocoa contracts months or more than a year in advance, to secure pricing for the massive quantities they need, the Journal said.

It said Ghana and Ivory Coast initially proposed a minimum price for their cocoa of $2,600 a metric ton during meetings with representatives of the chocolate industry last year.

Executives from a group of multinational cocoa and chocolate companies reportedly pushed back against a minimum price, saying the policy lacked clarity and could create havoc in the market.

Instead, the chocolate industry agreed to a premium added on top of the futures market price, which they said would be more straightforward, the Journal added.

Some chocolate companies have already begun buying West African beans with the premium attached. Others are cribbing, trying to find a way out of it, without too much success, since cocoa producers elsewhere, including in Asia, weren’t turning out enough supply.

“You’re talking about two-thirds of the world’s cocoa,” Jonathan Parkman, co-head of agricultural trading at London-based brokerage Marex Spectron, told the Journal, referring to the West African output. “The world cannot do without that cocoa.”

Another opponent of the plan is Eric Bergman, vice president at brokerage JSG Commodities Inc. He calls the new premium “essentially a $1.2 billion tax on the cocoa industry,” basing it on the two West African nations’ combined production of about 3 million metric tons.

The big three names in the U.S. candy business — privately-held Mars, Hershey (NYSE: HSY ) and Mondelez (NASDAQ: MDLZ ) — are, however, supportive of paying more for their West African beans.

“It’s the right thing to do,” said Christine McGrath, chief of global impact, sustainability and well-being at Mondelez, which currently buys cocoa from six countries, including Ivory Coast and Ghana.

“Mars believes boosting the income of cocoa farmers while ensuring cocoa is grown sustainably is key to a thriving cocoa sector,” said Joseph Gerbino, a global communications director at the company.

“Cocoa farmers should be able to support their families and earn a decent standard of living, and we support the goal of raising farmer incomes,” said Jeff Beckman, spokesman for Hershey.

These testimonies — that this COPEC initiative will be good for the cocoa farmers — is the message being spread by Ivory Coast and Ghana to push for global acceptance of their cartel.

Yet, advocates for the farmers themselves aren’t too sure if the plan will work.

“How are you going to tell the farmers to produce less if it’s the only way they’re earning a living?” Mr. de Hart said. “Oil can stay in the ground, but it’s going to be really hard to get farmers to stop producing.”

To this, I have an anecdote to add — of Malaysia and its failed attempts at managing a rubber cartel.

For 20 years, Malaysia ran the International Natural Rubber Organization, or INRO, which included Thailand, the other major rubber producer. But Malaysia exited the group in 1999 after the cartel’s buffer stock price intervention model based on Asian currencies became too challenging to manage in the aftermath of the Asian financial crisis. The availability of synthetic rubber also complicated life for INRO.

So, each cartel has its nemesis.

For rubber, it was Asian currencies and synthetic rubber.

For cocoa, it might be its own farmers not knowing when to stop producing.