The U.S. dollar is up for a fifth straight day, boosted by an increasingly hawkish Federal Reserve. The Dollar Index , which tracks a basket of six other currencies versus the USD is currently nearing its highest level in two years.

After Fed Governor Lael Brainard said yesterday that she expected the central bank's monetary policy would reach a "more neutral position" later this year amid interest rate hikes and quick unloading of the Fed's massive balance sheet, the index rose by 0.5%. Brainard added that the Fed is prepared to keep tightening until it reaches the often sought but generally elusive equilibrium between rising interest rates and still accelerating inflation .

What's especially notable about Brainard's dramatic statement is that among Federal Open Market Committee (FOMC) members, she's considered dovish. It speaks to the Fed's single-minded determination to hike rates when even a noted dove has started turning hawkish.

It's also notable that technicals are clearly signaling traders are all in for upcoming U.S. dollar gains. 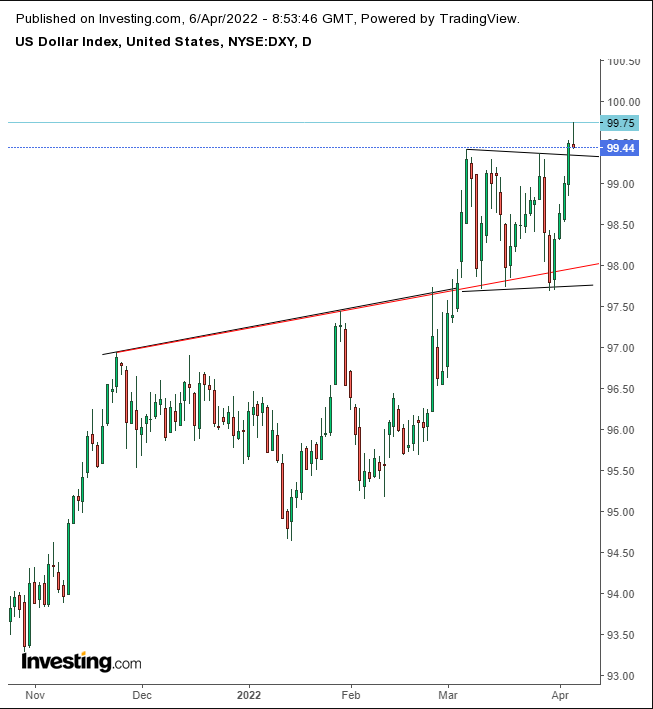 After Brainard's comments, the dollar broke out of the Rectangle in which it had been recently trading. The pattern developed after bulls managed to push the price above the neckline of an upsloping H&S continuation pattern.

The structure of the pattern is rising, a sign that impatient buyers couldn't wait until completion. Indeed, they were so certain it was rising that they simply jumped in.

The Rectangle's completion adds additional fuel to the rally, pushing momentum even harder. In the last two hours, the DXY retreated before slightly reversing again. Should the price close at the lower levels, around 99.5, it will have developed a Shooting Star, a bearish response to today's bullish attempt.

The candle could indicate that prices will fall back toward the Rectangle, and if that fails, even back to the H&S neckline.

Conservative traders should wait for a base above the Rectangle or above the H&S neckline before risking an extended position.

Moderate traders could take a position upon a return to the top of the Rectangle.

Aggressive traders would enter a contrarian position, shorting before the index turns around at which point they'd join the rest of the market in an extended position. Money management is essential. Here is an example: