This morning saw gold and especially silver both give back some of their very impressive gains made in the last week and a half. The reason? US dollar and bond yields both bounced back, after recent weakness on the back of central bank intervention to stabilize markets and weak US data leading to speculation that the Fed may pivot early. So, was that it for gold and silver, or will the dip buyers, and those who missed out on the rally, step in to take advantage of the weaker prices?

The positive sentiment in recent days came after weaker US manufacturing and employment data gave rise to speculation that the Fed may begin to pull back on a recent series of interest rate hikes sooner than expected. In addition, we have seen the likes of the Bank of England, Bank of Japan, and People's Bank of China all intervening in some way, shape, or form, while the Reserve Bank of Australia opted for a smaller-than-expected hike. For gold, there was an additional piece of good news as central banks across the world added to their net gold holdings for the fifth consecutive month in August, according to the World Gold Council.

The big rally in a longer-term downtrend means gold has clearly turned ‘overbought’ on smaller time frames following the big upsurge. So, some of today’s weakness can be explained away by profit-taking action from the bulls. The bears, who have been in control of gold’s price action for much of this year, may also be potentially stepping back in with prices testing resistance on the higher time frame charts around $1725-$1730 zone, as can be seen on the daily chart: 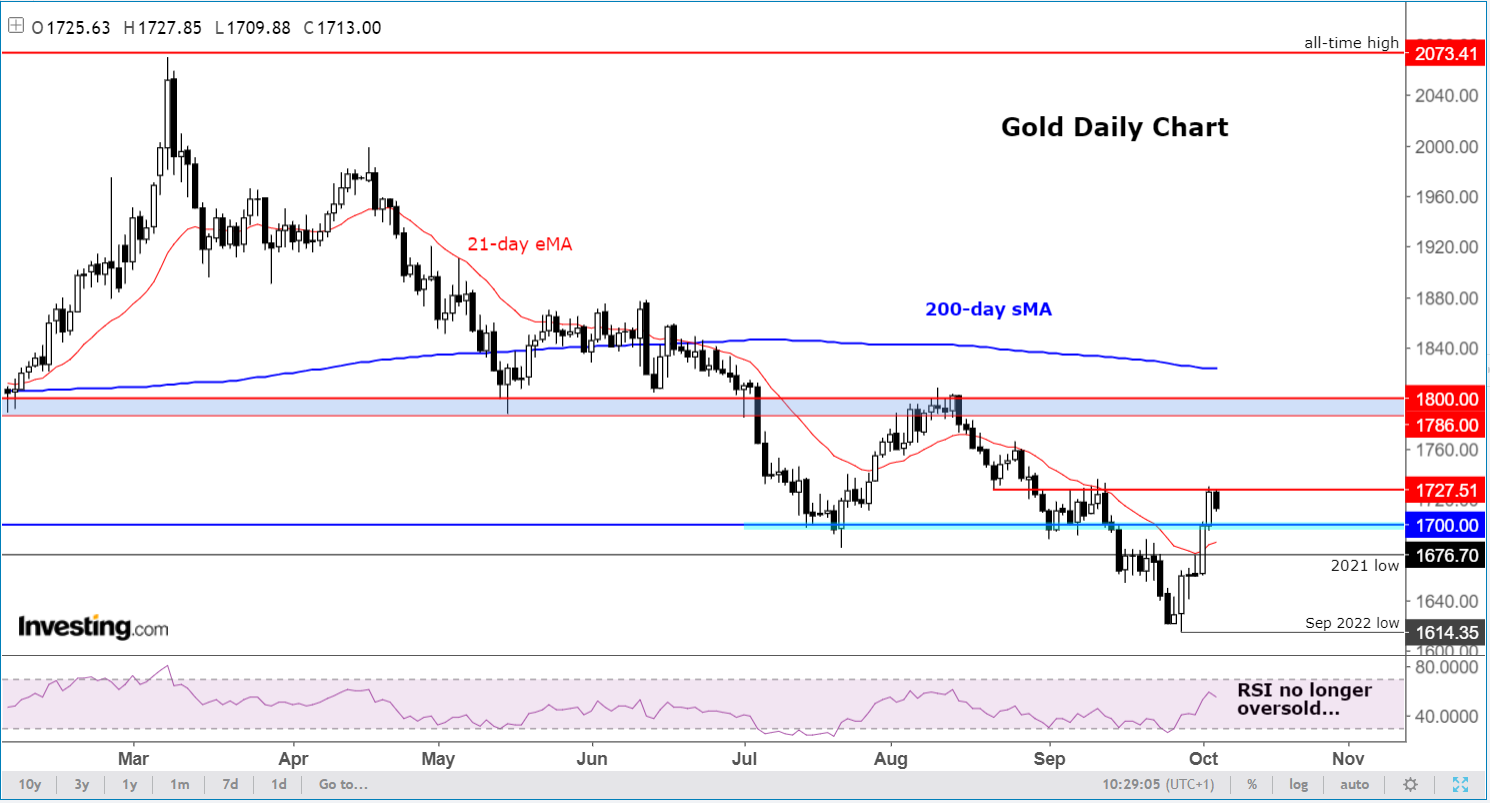 Now if gold bulls want to push prices higher, they will need to defend their ground near $1700/$1705 area, which was the base of Tuesday’s breakout and a former support/resistance zone. A successful defense here could pave the way for new gains on the week, in light of the bullish reversal we have seen across different asset classes.

But will it be able to?

As mentioned, gold has fallen back today as yields and the dollar have bounced back, following the release of some disappointing European data and ahead of US ADP employment and ISM services PMI numbers. The big rebound in oil prices has also renewed worries about the energy crunch and a long cold winter for Europe.

As much as I think gold is heading higher in the long term, rising interest rates is what has continually caused gold to sell off. Given that not a lot has changed on the rates front, I am more inclined towards another failed breakout attempt than a genuine one. So, I would be very wary of a potential breakdown here.

From a bearish point of view, a break below $1700 would point to another failed breakout attempt. If that were to happen, then a quick drop to next potential support at $1675/6 could be the outcome, with the latter also being the low from 2021. And if the bulls lose control of that area as well, then it is game over. In that case, we will likely head for a retest of the September lows at $1614 next.

So, a lot can happen and there are compelling bull and bear cases to be made. But let’s wait for the market to decide the direction and traders can take advantage of the break in whichever direction the metal wants to go. As mentioned, my base case is that there might be another breakdown, but it is important to be open-minded about any outcome. After all, it could be that the market has now fully priced in the future rate hikes and other risks facing investors.

Disclaimer: The author currently does not own any of the instruments mentioned in this article.