The FX markets have been fairly quiet given how volatile the equity markets have been. As another week draws to a close there is still a lot of uncertainty hanging over the markets with regards to the new COIVD variant, Omicron.

Today’s US nonfarm payrolls (NFP) report should trigger some volatility and may lead to renewed dollar strength, so long as we don’t see a very disappointing set of numbers, especially on the wages front.

The EUR/USD will be in focus, along with other dollar pairs: 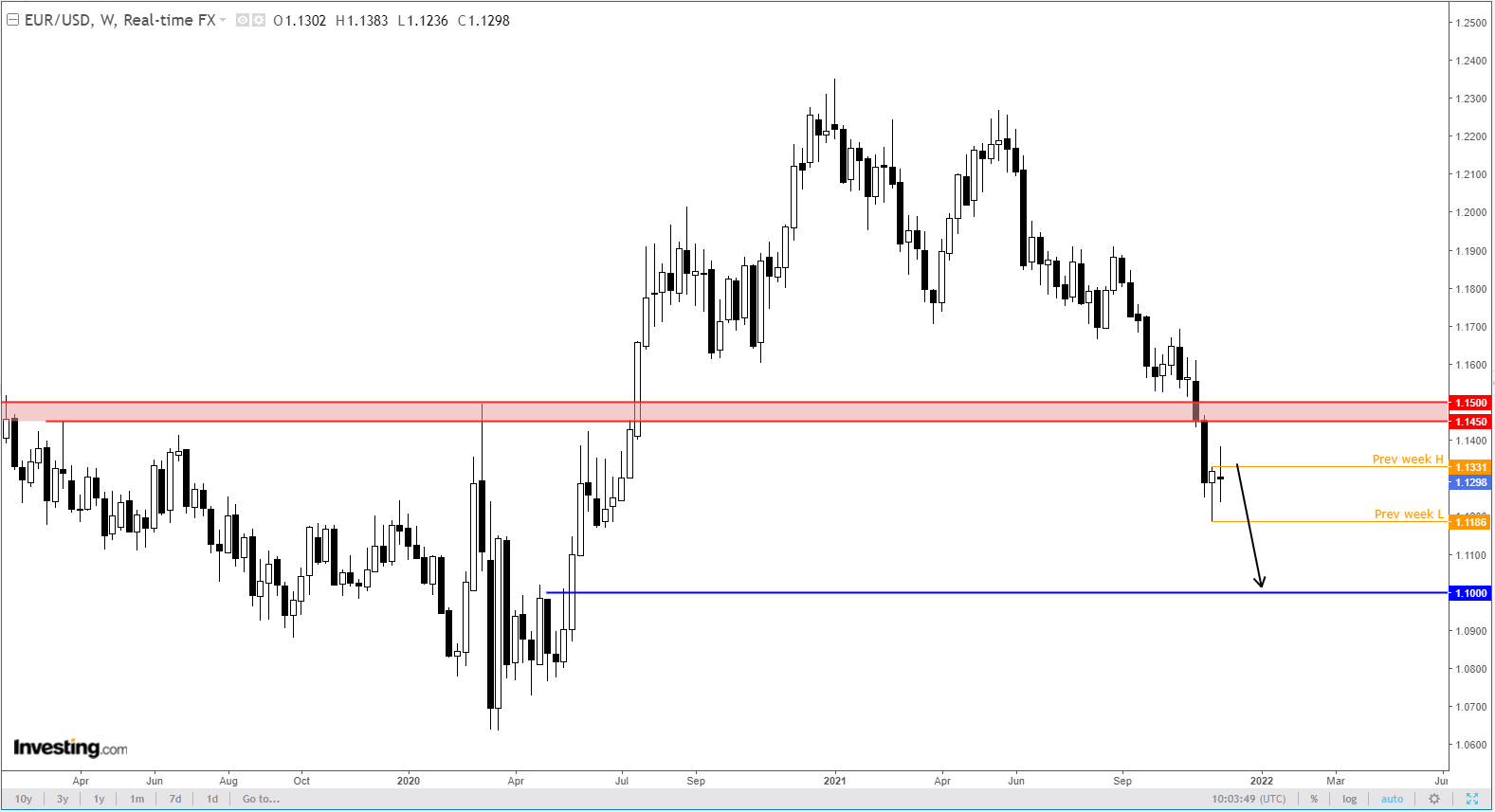 The world’s most heavily-traded pair created a hammer candle on the weekly time frame last week. Usually, such hammers indicate that the preceding bearish trend has ended. While that may turn out to be the case, the fact that we haven’t seen any significant follow-through to the upside suggests otherwise.

Indeed, I reckon the hammer may well prove to be a trap for the bulls. Already, the price has started to go back within last week’s ranges after a brief stay above the high. But as it is an NFP week, we were never going to see sharp moves ahead of the data anyway.

If the bulls are indeed trapped, we may well see some further weakness to take us to levels where stops are resting. The most obvious place would be below last week’s hammer candle at 1.1185. But then why can’t it go even lower? Why not, for example, head to 1.1000—the base of the breakout in May last year.

Fundamentally, there’s currently very little obvious reasons why the EUR/USD should be going higher. Indeed, in terms of who is the more hawkish central bank, the Federal Reserve is head and shoulders above the European Central Bank.

Fed Chairman Jerome Powell has effectively admitted the Fed’s “transitory” view of inflation was wrong and that they could wrap up bond purchases in the next few months, despite the threat of Omicron variant. The market has brought its first full rate hike expectations forward, accordingly.

In contrast, the ECB is unlikely to reduce stimulus faster than it had previously projected despite inflation surging to 4.9%. The ECB will meet on Dec.16 to decide whether to end its emergency bond purchases in March, as planned, and what to do thereafter.

Given the recent upsurge in virus cases across the Eurozone and uncertainty over the Omicron variant, the ECB may well have to delay any decision on bond purchases for a couple of months at least.

The potential for new disruptions to economic activity as a result of full or partial lockdowns means the central bank may decide to increase its bond purchases under its Asset Purchase Programmes (APP) when the Pandemic Emergency Purchasing Programme (PEPP) ends in March.

The only obvious caveat to the bearish EUR/USD forecast is that the FX market may have already priced in the growing rate disparity between the Fed and ECB. After all, the EUR/USD has been heading lower since the start of the year.

Still, even if that’s the case and the above weekly hammer candle turns out to be a genuine bullish reversal, the upside should be capped, with key resistance around 1.1450 to 1.1500 likely to be the ceiling until something fundamentally changes.

All told, the outlook remains bearish on the EUR/USD and I reckon 1.100 could be revisited very soon.