Increasingly tougher sanctions levied against Russia by the US and its Western allies after Moscow's incursion into Ukraine are said to be boosting demand for Bitcoin . It's not just because the cryptocurrency doesn't utilize the SWIFT network that's generally used for global financial transactions. As well, Russia recently announced it was considering accepting payment for its oil and gas exports in BTC.

That could explain why the number-one cryptocurrency by market cap turned higher over the weekend, after spending some time trading within a tighter range.

Nonetheless, it's difficult to ignore the change in the direction of supply and demand. Even as the price edged higher, volume appeared to diminish.

To be totally honest, we're bearish on Bitcoin as a general concept. However, that doesn't mean that Bitcoin can't rise even if we remain skeptical regarding its true value.

But we're also bearish on the token's trajectory based on its supply and demand dynamic longer term. Notwithstanding, we do recognize there's a counter-trend in the making. 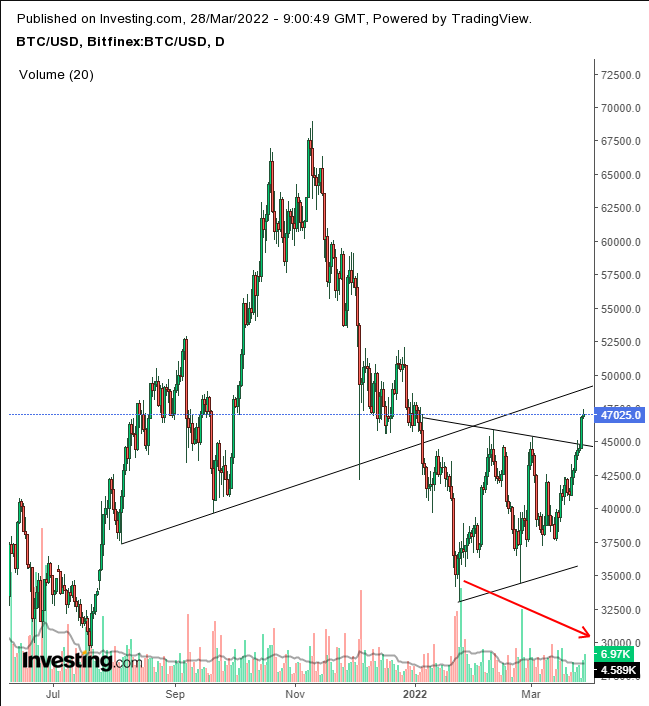 Bitcoin has completed either an Ascending Triangle or an H&S bottom. This is academic since both have the potential to create rising momentum after the upside breakout triggers a technical chain reaction.

Still, will the current bullish dip-buying be enough to counter the much more significant, preceding H&S top? We don't think so, but then we don't know the future.

What we do believe, though, is that the ebbing volume amid the bottom's development and completion does not support the upward movement. Nevertheless, it raises the odds of a base. Aggressive traders would likely treat it as a corrective rally upon which to short the cryptocurrency.

Conservative traders should wait for evidence that the neckline of the larger H&S top will prevail, sending the price back below the bottom's trendline.

Moderate traders could sell if the neckline demonstrates resistance by topping out or buy upon the price bouncing off the bottom's neckline.

Aggressive traders would short either upon evidence of resistance or upon a return to the top's neckline.