This week, we are seeing some cracks starting to appear in some commodity currencies, with global stock indices and some commodity prices like crude oil coming under pressure.

Until this week, the Australian , New Zealand and Canadian dollars had all resisted the US dollar ’s strength, with the latter surging higher against the likes of the yen and euro , and doing relatively well against the pound .

Australia’s dollar, in particular, had been the best-performing among G10 currencies this year, owing to the big upsurge in commodity prices. But it looks like the AUD/USD’s rally has finally come to an end, at least for now anyway.

This is due, in part, to the fact, the US dollar has found strong support across the board amid speculation over a sharp tightening of monetary policy by the Federal Reserve, including the potential for a 50 basis point hike in May and a reduction in the central bank’s balance sheet.

With the AUD/USD reversing, the weekly chart of the currency pair shows a shooting-star-like candle in the making after rates failed to hold the break above the 61.8% Fibonacci retracement level around 0.7610ish. 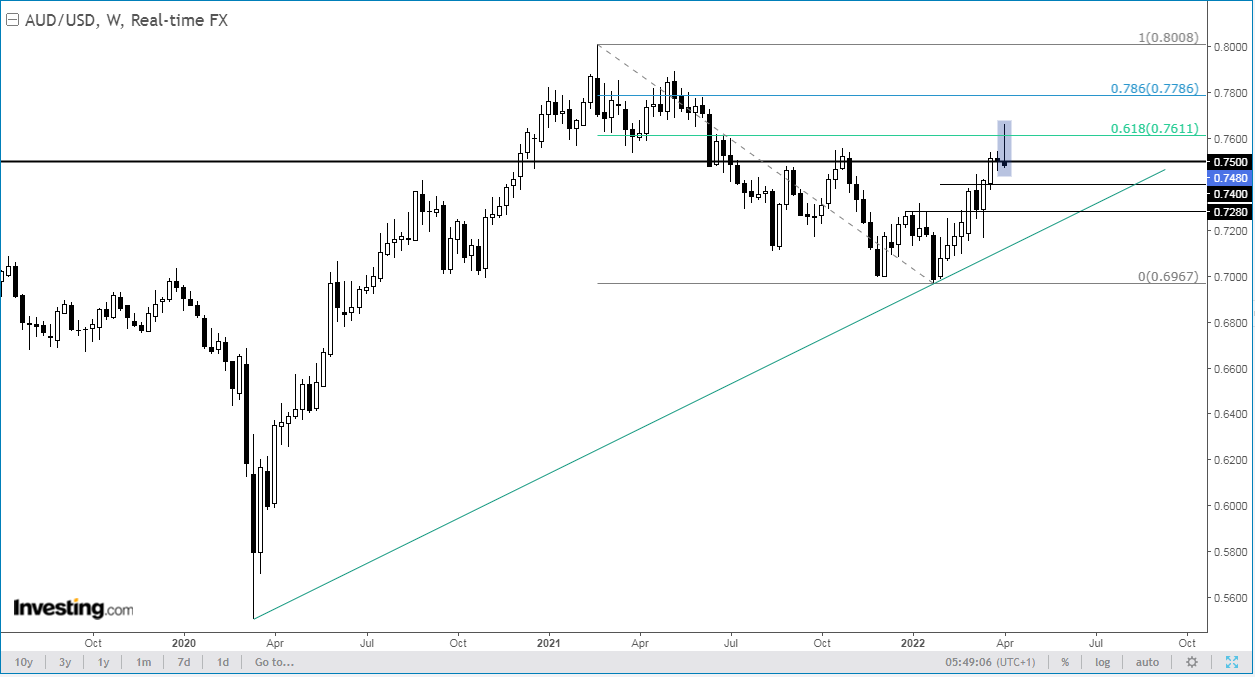 The resulting failure has sent the Aussie below the pivotal level of 0.7500, where it was residing at the time of writing. If confirmed by a negative close for the week, we could then see some further downside in the week or weeks ahead.

The New Zealand and Canadian dollars are not doing very well either.

The NZD/USD weekly chart shows a similar candlestick pattern as the Aussie. Zooming into the daily chart of the kiwi, we can see that rates have now broken below 200 MA again, after failing to take out the long-term bear trend line at just north of the psychologically important 0.70 handle at the start of the week. 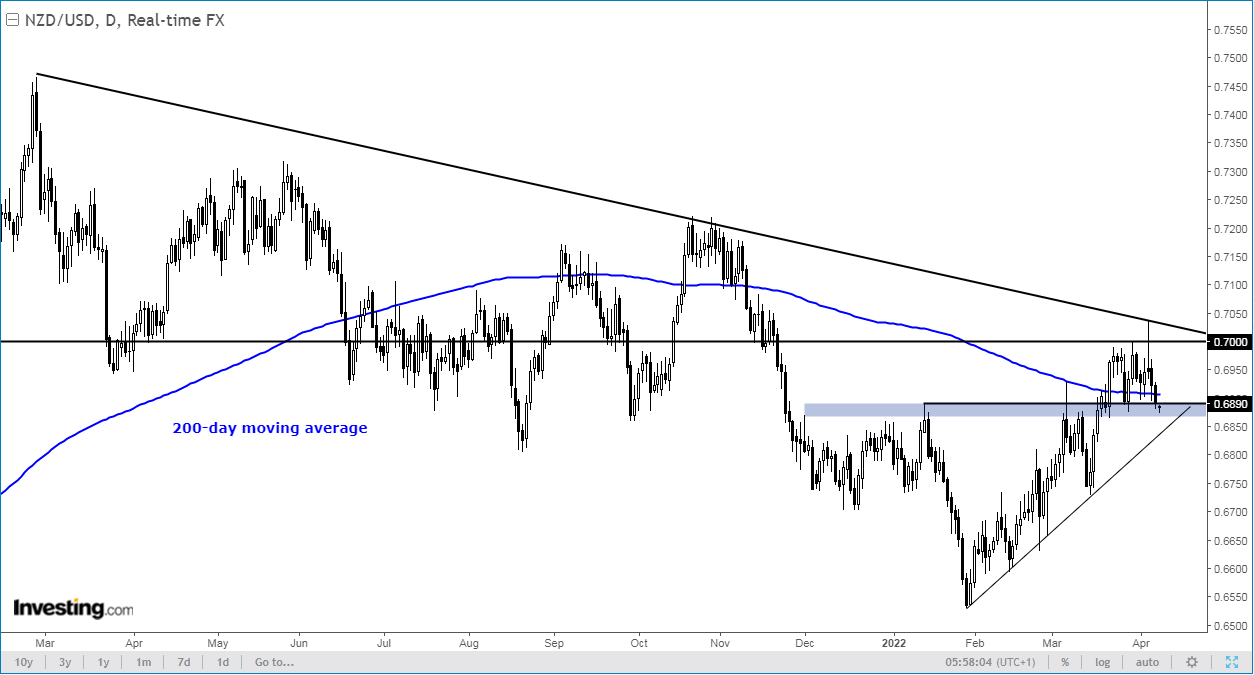 The selling pressure could intensify should support around the 0.6870-0.6890 area give way now.

Meanwhile, the USD/CAD has been building a base below its 200 MA, after sweeping stops below January low of 1.2450 on at least two separate occasions. 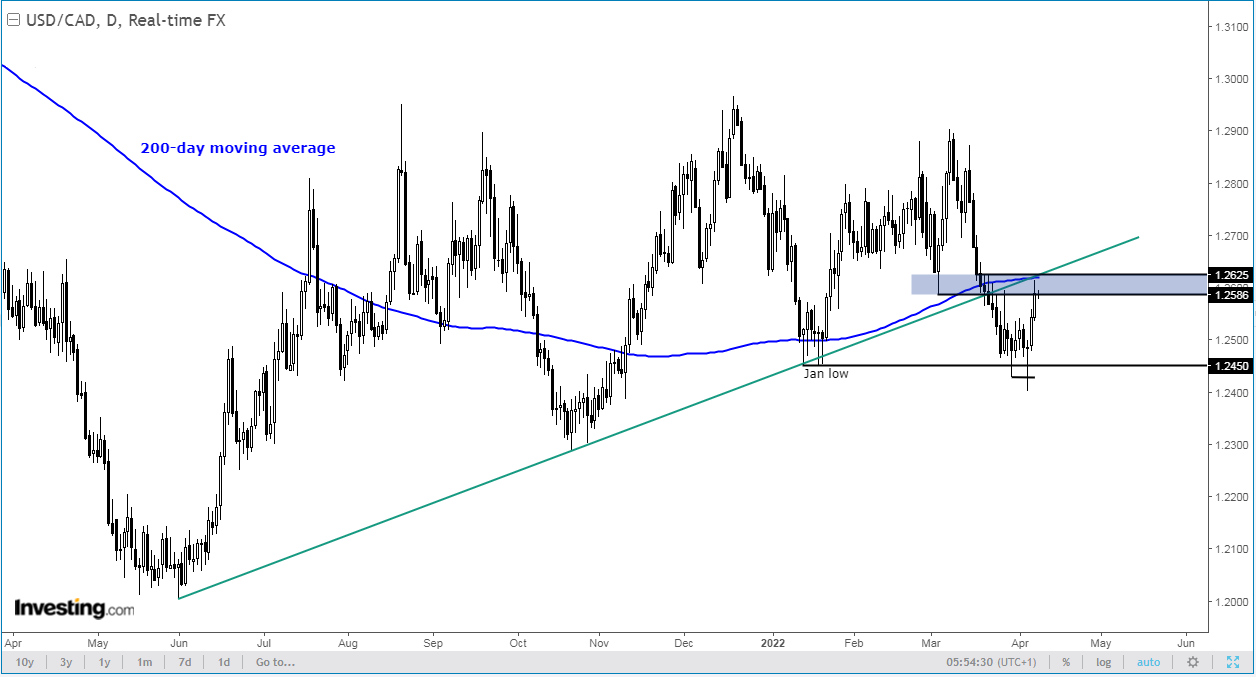 Interestingly, the USD/CAD hasn’t managed to get anywhere close to last year’s low, around 1.20 handle, even as oil prices hit fresh multi-year highs in recent week. With oil now sharply off its highs, the positively correlating CAD could also weaken, which could lift the USD/CAD pair above the 200 MA. Specifically, a clean break above the 40-pip resistance range between 1.2585 and 1.2625 is what could trigger an even sharper rally in the days ahead.

So, keep a close eye on commodity dollars in the days ahead for shorting opportunities as they are finally showing some signs of fatigue after their strong performances earlier in the year.