Its dispirited performance on the futures market is barely in sync with its sharp taste on the breakfast table. Still, there might be good news for those with positive bets on orange juice ; America’s favorite morning staple could see an energizing price boost that brings it in line with some of this year’s better-performing commodities.

As well, the revival in the fortunes of New York’s orange juice futures may have its roots more in Brazil, the world’s largest citrus grower, than in Florida, the so-called Orange State of the US.

Brazil already supplies over half of all the orange juice bottled by US companies such as PepsiCo's (NASDAQ: PEP ) Tropicana division and Coca-Cola's (NYSE: KO )’ Minute Maid. However, citrus supplies in the South American country are now at their lowest levels since 1998 due to weather-induced crop stress, making higher prices almost certain.

Another factor that could drive the rebound in OJ futures is the real . The Brazilian currency is caught up in its biggest monthly rally in more than two years on bets that right-wing presidential candidate Jair Bolsonaro will sweep into office in the October 28 elections, after which he vowed to roll out major reforms against corruption and other crimes.

The real is the currency used by Brazilian farmers to sell their crops, and the prospect of paying more for such imports could prompt juice bottlers in the US to source more raw material from Florida and other domestic locations—bolstering local demand and prices.

“Brazil has the smallest OJ ending stocks in over 20 years, so there can be no misfiring with either production in the US or in Brazil,” Shawn Hackett of Hackett Financial Advisors, an agricultural markets consultancy in Boca Raton, Florida, said in his juice outlook on Wednesday. 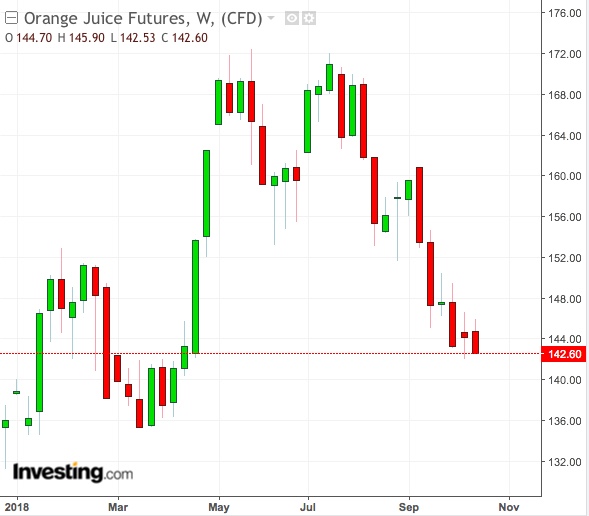 OJ’s most-actively traded futures contract, November, settled down 1.6% at $1.42 a lb in New York’s latest session. While it is still up 5% on the year, the recent trend in OJ has been lower: a 6 percent loss in August, a 7 percent drop in September and a 4 percent slide month-to-date in October.

Investing.com’s daily technical outlook is bearish on OJ. There's a “Strong Sell” recommendation at every stage of the market from the 5-Day-Moving Average of $1.4388 to the 200-day MA of $1.5790.

Hackett disagrees with that view, saying “end-users should be protecting upside price risks at this time.” He added:

“With strong smart money buying having triggered a credible buy signal and given that we have reached important support, OJ should see a solid rally from here.”

The US Department of Agriculture (USDA) says the recovery of Florida’s orange groves from disease could result in production for the 2018-2019 season rising to 79 million boxes, up 76% from the 45 million boxes noted in the 2016/17 season.

The Wall Street Journal, commenting on the USDA forecast this week, said the production spike in Florida was precisely the reason for the low futures prices of OJ. It said the total number of Florida-grown orange juice gallons sold in the four weeks through September 29 fell by 6.4 percent from the same period last year as farmers increased their prices by 2.2 percent.

For the whole season that runs through the end of September, sales were down 5 percent from the previous season, continuing a multi-year trend of shrinking demand, it added.

Hackett said OJ futures tend to bottom in mid-October and rally into December on Florida frost fears. He added:

“Our work suggests that this year, the chances for a frost scare in the Florida citrus belt will be higher than normal.”