The cryptocurrency market has suffered sharp declines across the board this week. Bitcoin endured its biggest daily drop since last September (more than -11%) and lost the $60,000 level in what has been a 15.5% drop from the record highs reached November 10th. 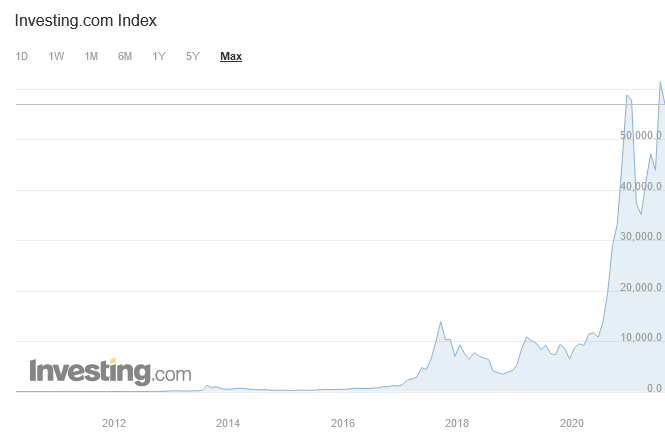 But the fall was not unique to Bitcoin. Ethereum fell 10.15% in one session, and other cryptocurrencies such as Solana , Cardano , XRP and Polkadot saw similar drops.

So why these sharp falls? There are several compelling potential reasons, including:

These three elements in themselves have enough weight for investors to take advantage of the sharp rise in Bitcoin to cash in and liquidate their positions.

What are the expectations for Bitcoin now? Well, we should focus on the following:

1) As far as China, it should be remembered that in September, after the government banned any type of cryptocurrency operation, while Bitcoin’s price fell for several days (over 8%), it not only recovered but flew upwards by more than 60%.

Therefore, although it is a negative issue for cryptocurrencies, it is not a new issue. Every time China reiterates its official message, we see short-term drops that do not take long to recover. So unless there are new developments, the pattern should not change.

2) When Bitcoin set new record highs a few days ago, it had as a catalyst all the expectations around the biggest Bitcoin update in 4 years, which is known as Taproot. This is a positive because it will mean, though not in the short term, that the economic costs of transactions will be lower. It also brings the possibility of masking complex transactions in the Bitcoin Blockchain, which would increase privacy in Bitcoin operations.

Therefore, Taproot is one of the most important changes in the Bitcoin network since the adoption of SegWit in 2017. But this time we are talking about a Soft Fork, an update that will bring operational improvements to the protocol. Mind you, we are talking about long-term consequences, but the the strong rise of Bitcoin obeyed expectations, not its materialization, not to say that it was also a fact already known and therefore discounted in the price of Bitcoin, hence marking a new record on November 10.

3) Bank of America's survey of global fund managers is always very interesting. In November it found that Bitcoin purchases were the second most popular trade for fund managers in November, second only to tech stock purchases. In terms of forecasts, 25% see Bitcoin at $75,000 in a year's time and 19% that it will fall to $25,000 or $50,000.

It's true that cryptocurrencies have faced a bumpy road to U.S. financial system acceptance. But now they are about to encounter a new obstacle, as banking watchdogs are poised to announce an even more cautious approach to regulating digital tokens.

The federal agencies are about to release a joint statement outlining the results of their "cryptosprint," a review the government conducted earlier this year to get a better handle on virtual currencies. And it is expected that the findings will not be at all favorable for the sector.

Also of note is the SEC chairman's words about being comfortable with futures-based ETFs because Bitcoin futures trade on highly regulated exchanges.

My take on Bitcoin is that the reasons stated are sufficient and logical ones for the cryptocurrency’s price to fall, but that the sharp declines will only encourage more investors to buy at lower prices. Just look at what the third-largest whale in Bitcoins just did, taking advantage of the declines to invest several million dollars.

From a technical point of view, the last signal given by the golden cross - when the 50-day moving average crosses the 200-day moving average to the upside, triggering a buy signal - last August has worked out well, as Bitcoin has risen from $44,400 to nearly $69,000 in just 3 months.