Digital currencies have been on a wild ride. As of May 5, Bitcoin and Ethereum had a combined market cap of $1.478 trillion, or 62.2% of the asset class’s total $2.375 trillion value. The dominance of the two leading cryptocurrencies has been declining as new tokens are bursting on the scene each day. On May 5, another 9,605 coins were competing for market share in the burgeoning asset class.

Two of the top ten digital currencies are Binance Coin (BNB) and Uniswap (UNI). Together, the third and eleventh tokens in the asset class have a $121.447 billion market cap, translating to 5.14% of the total. The top tier cryptos have moved significantly higher with Bitcoin and Ethereum.

Still, each token has distinctive characteristics that will result in out or underperformance over the coming weeks, months, and years. Liquidity and positions as top-ten digital currencies make BNB and UNI safer than the other over 9,600 cryptos.

However, the parabolic price action over the past months poses a threat to all asset class members, and there could be nowhere to hide in a severe correction where all coins lose value. Bitcoin has been the leader on the upside, and the same is likely to hold on the downside with the other cryptos following like obedient puppies.

Only eleven tokens have market caps above the $22 billion level

As of May 5, 9,607 cryptocurrencies comprised the asset class. The top eleven have over $22 billion market caps. Bitcoin is the only digital currency with over $1 trillion, and Ethereum’s market cap at the $407 billion level may be a distant second, but it is far ahead of the third crypto, Binance Coin, with around $99.325 billion in total value. Uniswap is eleventh in the hierarchy with roughly $22.122 billion.

Small part of the asset class

While the top eleven digital currencies control the lion’s share of the asset class’s market cap, they are only 0.114% of the market. New tokens come to the market each day.

Bitcoin and Ethereum have occupied the top two rankings since other tokens began to appear. The other leading tokens have risen and fallen, consistently jockeying for a place in the hierarchy. Over the past week, the coin that began as a joke, Dogecoin , rose to fourth place with an over $86 billion market cap.

Bitcoin went from six cents in 2010 to $65,520 per token on Apr. 15. Ethereum moved below 55 cents in October 2015 to $3580.50 at its most recent high last week. Speculators and investors are scouring the market for the next token that will deliver Bitcoin or Ethereum-like returns.

Investing or speculating in digital currencies is one thing; trading the volatile instruments is another. The recent Coinbase (NASDAQ: COIN ) offering made the trading platform public, regulated, and moved it into the mainstream like the Chicago Mercantile Exchange (CME) and the Intercontinental Exchange.

All three exchanges make money on volume. COIN’s future success will depend on increasing liquidity in the asset class.

The top-tier cryptocurrencies offer liquidity as their market caps attract billions in daily turnover. The high level of price volatility makes for a trader’s paradise in the asset class, with the top-tier tokens offering the best opportunities.

The tokens with the leading market caps and daily trading volumes will offer the tightest bid-offer spreads for traders to enter and exit risk positions without substantial costs or slippage. Slippage is the cost of trading based on executing buying or selling orders. Trend-following technical traders, systems, and algorithms will continue to flock to the digital currency arena as liquidity grows, and the top-tier, best-in-breed tokens with the highest market caps will attract the most interest.

While Bitcoin and Ethereum are the best-known and most actively traded tokens, Binance Coin and Uniswap are near the top.

Binance Coin holds the third position in the asset class week, making it the bronze medal winner, with Bitcoin holding the gold and Ethereum the silver. Binance Coin (BNB) is a crypto used to trade and pay fees on the Binance cryptocurrency exchange. BNB can also be traded for other digital currencies, such as Bitcoin. BNB operates on blockchain technology. Binance Coin is an Ethereum-based token; its rank as third makes it the leading altcoin, or Bitcoin alternative.

BNB’s website offers lots of information on the Binance Ecosystem and the Binance Coin token. 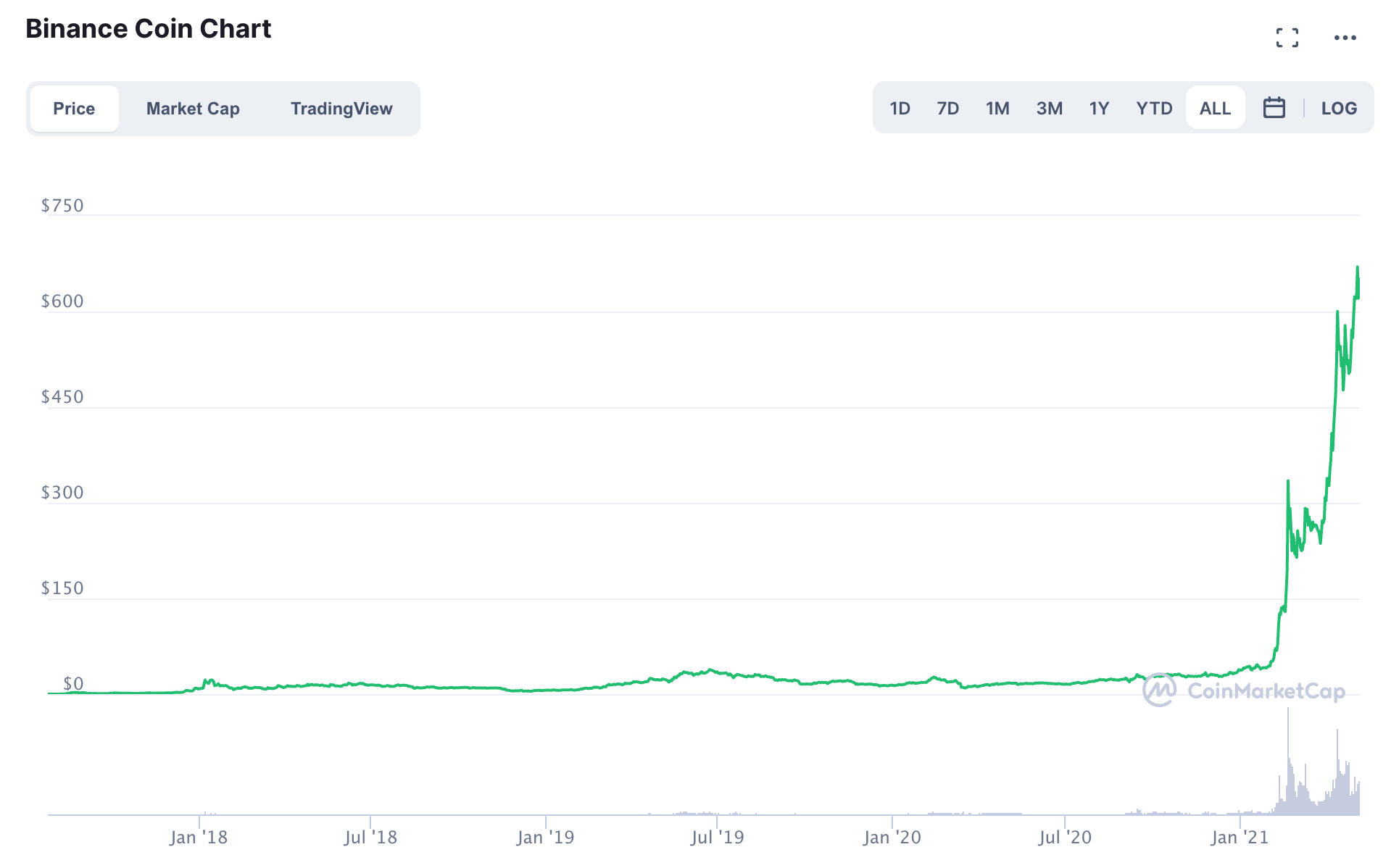 The chart shows that BNB traded at around 10 cents per token in 2017 and was near the all-time high at the $656.24 level on May 5. Binance Coin is another success story in the digital currency asset class, leading to it ranking in the top three.

Uniswap coin (UNI) is the eleventh-leading cryptocurrency. It is the token for the decentralized crypto exchange that operates on the Ethereum blockchain. The company operates the exchange and requires users to place funds under their control and use liquidity pools to make two-way bid-offer markets instead of a traditional order book system that facilitates trading.

UNI’s website outlines the details of the growing protocol ecosystem. 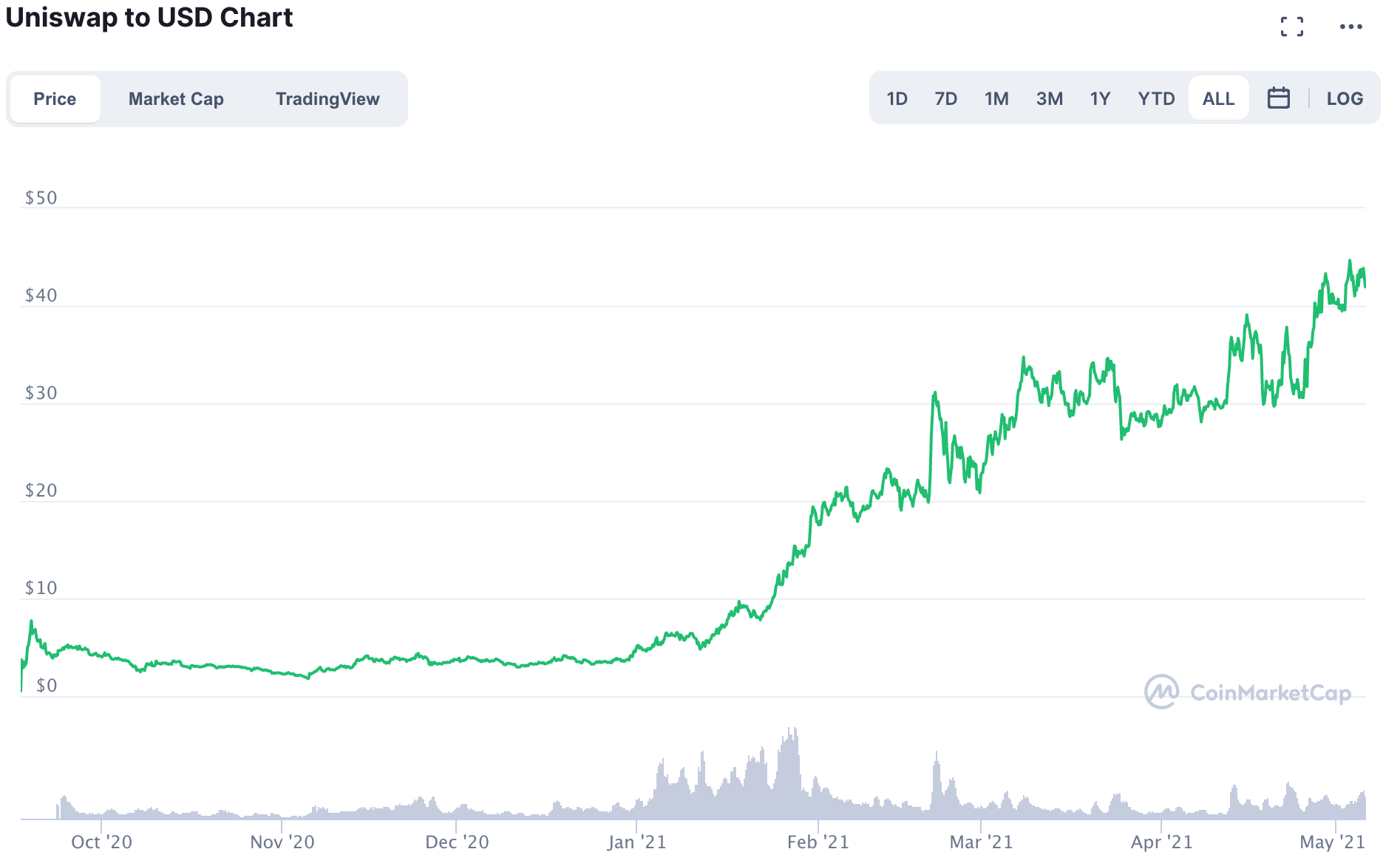 After trading to a low of under $2 in November 2020, UNI was over the $40 per token level on May 5. UNI and BNB are two tokens that offer market participants suitable liquidity for trading.

On May 5, BNB traded around $4.269 billion over a 24-hour period, and UNI’s volume was $1.484 billion. For investors and traders, liquidity is a significant concern for including an asset in portfolios. The ability to buy or sell within a tight bid-offer spread is a critical factor for success.