After a powerful rally this year, bank stocks have lost some of their shine in recent days.

The KBW Bank Index , which had surged about 40% until mid-June, is now down more than 10% from that level. Losses in the group have been led by some of the largest lenders in the U.S., with Citigroup (NYSE: C ) dropping 14% and Regions Financial (NYSE: RF ) slumping 17%.

So, what’s behind this sudden change of heart on the financial sector by investors?

It’s perhaps a threat that upcoming earnings could disappoint after surprisingly robust performances during the pandemic.

JPMorgan Chase (NYSE: JPM ) Chief Executive Officer Jamie Dimon warned investors last week that the lender’s trading revenues, one of the biggest boosters during the pandemic, could fall 38% from a year ago to less than $6 billion in the second quarter. That tally could end up lower than the already reduced average analyst estimate of $6.5 billion.

As well, Citigroup shares fell the most in five months on June 16 after the bank warned expenses would increase sharply as it invests to satisfy a pair of consent orders from regulators. Expenses in the second quarter will likely jump to “somewhere in the middle” of a range of $11.2 billion to $11.6 billion, Chief Financial Officer Mark Mason told investors at a virtual conference. That compares with costs of $10.4 billion a year earlier . 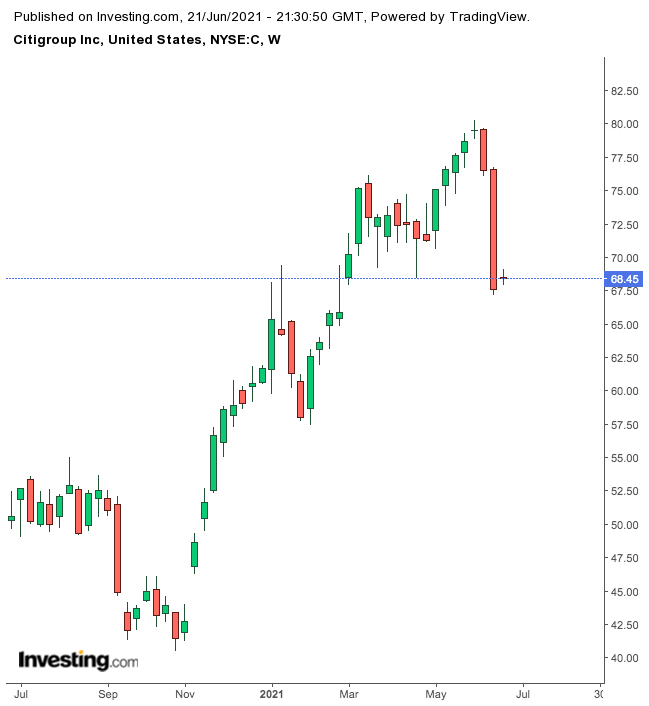 U.S. bank stocks have outperformed the benchmark S&P 500 Index by a big margin this year on optimism that higher trading volumes, the reopening of the economy and a spending binge by consumers will continue to fuel earnings. Some of these assessments, in our view, still hold.

For example, there remains a huge pent-up demand for credit that got hammered during the pandemic. From individual borrowers to large corporations, 2020 was the year when spending plans were scrapped as lockdowns forced potential borrowers to preserve cash and cut costs.

That situation is unlikely to persist as the U.S. economy fully reopens as planned this year. Combined with the government’s massive infrastructure spending, and a gradual tapering off monetary stimulus, banks could see demand for credit pick up substantially during the rest of 2021.

Gerard Cassidy at RBC Capital Markets said in a Bloomberg report that bank stocks are a buy on weakness because loan growth will come after companies and individuals use up their liquidity accumulated during the pandemic.

What’s more, credit quality is strong and margins could improve next year as short-term rates rise. “Combine that with increased loan growth, the revenue growth picture could turn out to be very positive for the banks in 2022,” he said.

Another reason that makes some lenders attractive in this low-rate environment is the possibility they could accelerate their share buyback plans and increase  dividends after the Federal Reserve stress test , results of which the regulator will release on June 24.

The test examines how big bank portfolios would perform in a hypothetical economic downturn. The biggest banks in America—a group that includes JPMorgan and Goldman Sachs (NYSE: GS ) as well as Bank of America (NYSE: BAC )—must do well on the tests before they can return money to shareholders. Analysts are confident the banks will have no problem passing. 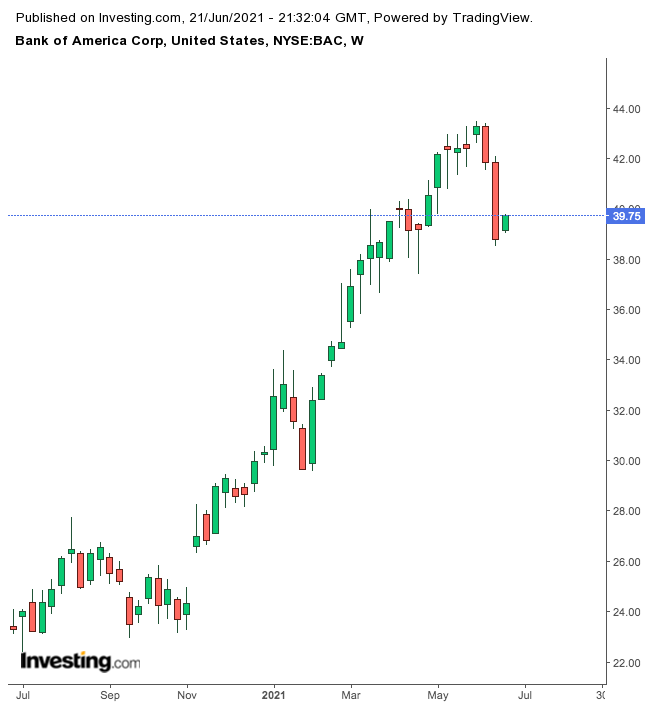 The economic backdrop is still favorable for banks, making their shares attractive after the recent sell-off. Investors who want some banking exposure might consider adding such solid names as JPM and Bank of America to their portfolios. These top lenders, due to their diversified business models, are in a better position to outperform than smaller regional players.