We have all heard the sayings, buy the rumor and sell the news or sell the rumor and buy the news. A market reversal on expected news items is common in markets when valuations reach peaks or bottoms. When the sentiment reaches a certain level on a predicted event, prices often reverse as market participants look to take profits or losses simultaneously. When buying overwhelms selling, prices move higher and vice versa.

Many markets now focus on rising inflationary pressures created by a tidal wave of central bank liquidity and a tsunami of government stimulus programs. The next significant event will be the annual August gathering of the Federal Reserve in Jackson Hole, Wyoming. While the vacation period meeting provides a chance for exchanging ideas, fishing, hiking, and other outdoor activities that build relationships and allow for fresh ideas and debate. It has become a time when the US central bank rolls out its plans for the coming year.

Commodities have been in the spotlight as they are susceptible to inflationary pressures. Prices have been trending higher. The commodities asset class posted an over 10% gain in the second quarter and were just over 20% higher over the first six months of 2021. As the Fed prepares to travel to Jackson Hole, the market anticipates a shift towards a more hawkish approach to monetary policy following the annual event. Commodity prices have declined from the highs, but we could be on the verge of a sell the rumor and buy the news response from the asset class that has appreciated since the March and April 2020 lows in the aftermath of the trip to Wyoming.

CPI remains hot as a pistol

The June CPI data was red hot and even more inflationary than the market had expected. The 5.4% rise in the indicator and 4.5% increase in the core index that excludes food and energy pushed inflation to the highest level since October 1991. Anyone who fills their car with fuel goes grocery shopping, pays monthly bills, is looking for a new home or vehicle knows that prices are skyrocketing.

Higher prices are the quid pro quo for the unprecedented level of central bank liquidity and government stimulus. In 2008, following the global financial crisis, the Fed’s liquidity and government stimulus stabilized the economy. In 2020, the central bank and government used the same formula. The only difference was the levels were far higher than in 2008 and the subsequent years. When it comes to inflation, following the same path in 2020 as a dozen years before, we are likely to see the same consequences. Commodity prices fell in 2008 and reached bottoms. By 2011 and 2012, prices hit multi-year, and in some cases, all-time highs as inflation was the price tag.

'Transitory' is an attempt at calming rhetoric

After the May CPI, the Fed’s economists, the US Treasury, and many market analysts attributed the higher-than-expect readings on “transitory” factors, including higher in lumber and copper futures markets. Lumber became the poster child for the May data. The sharp decline provided some validation to the temporary nature of the inflationary reading.

They pointed to highs in new and used cars in June, which lifted the index to the highest level in three decades. The term “transitory” has become a rhetorical mantra for the Fed and Treasury. Promising that prices are only temporarily elevated allows for a continuation of the monetary and fiscal policies that have led to rising prices. No one knows for sure where markets are going tomorrow or the next day, let alone one month, one quarter, or one year from now. The bond market had been signaling that inflationary pressures were rising since August 2020. 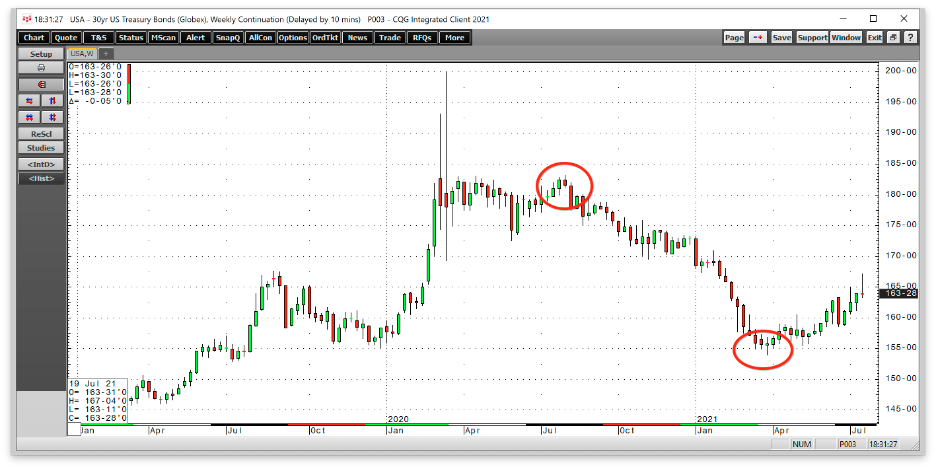 The weekly chart of the 30-year US Treasury bond futures shows that the long bond futures fell from 183-06 in August 2020 to a low of 153-29 in late March 2021. Rising interest rates while the Fed’s QE program was purchasing $120 billion each month in government debt securities was a sign that the Fed and Treasuries stimulus was inflationary.

Ironically, the bonds consolidated in April through May and took off on the upside when the Fed began to signal that it might be setting the stage for tapering QE and scheduling liftoff from a zero percent Fed Funds rate. On Monday, July 19, the stock market hit a speedbump, commodity prices fell, and the long bond rose to the highest level since February 2021. The market’s price action handed the Fed and Treasury a pass to continue stimulus as the number of COVID-19’s Delta variant cases began had been rising in the US and worldwide. The market panicked at the prospects of a slowing economy. Moreover, with increasing corporate and individual tax rates on the horizon, the market was overdue for a correction. Given the current environment, higher taxes are a very high odds bet.

The market price is always the right price

The price of any asset is always the right price as it is the level where buyers and sellers meet in a transparent environment. Many analysts and pundits constantly tell us that various asset prices are too cheap or too expensive. They are always wrong because the current market price is always the correct price level.

As the Fed continues to ponder its monetary policy path, the recent inflationary data has caused FOMC members to shift towards a more hawkish tone. This week’s selling in stocks, commodities, and cryptocurrencies could be the start of a more substantial correction. Conversely, it could be nothing more than a speed bump on the way to higher levels. Bull market corrections can be brutal. Over the past weeks, the high-flying commodities that hit all-time highs in May have become falling knives. 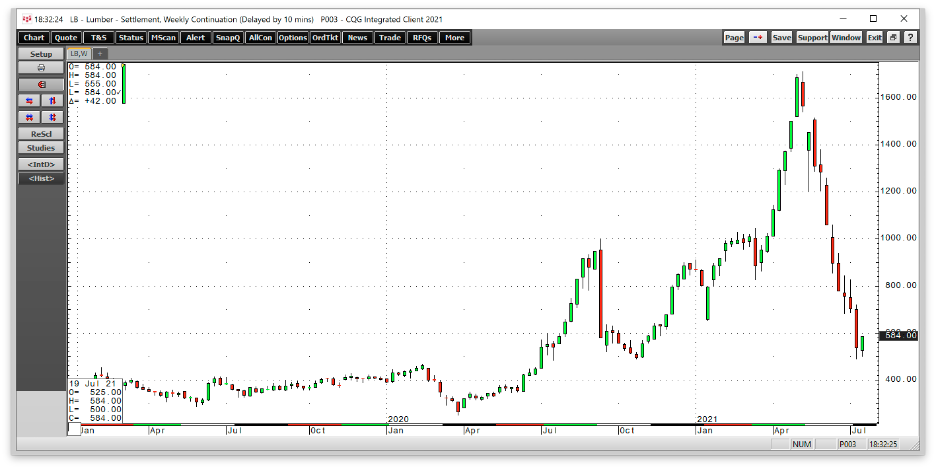 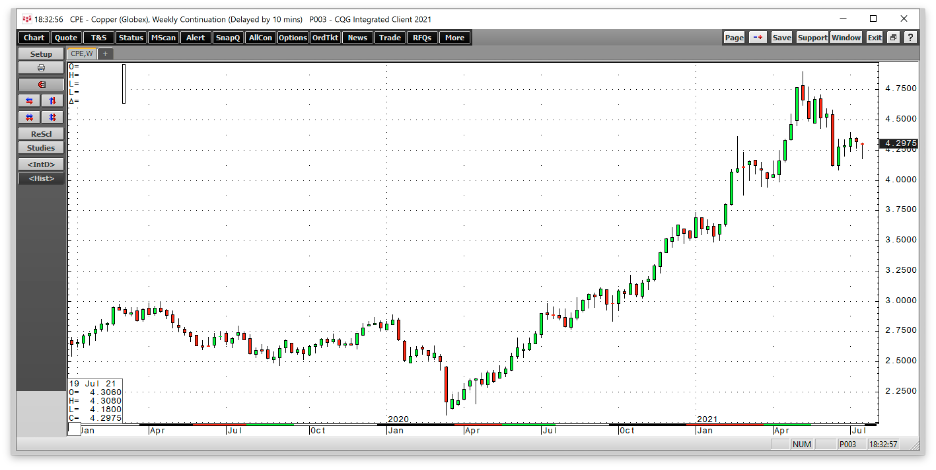 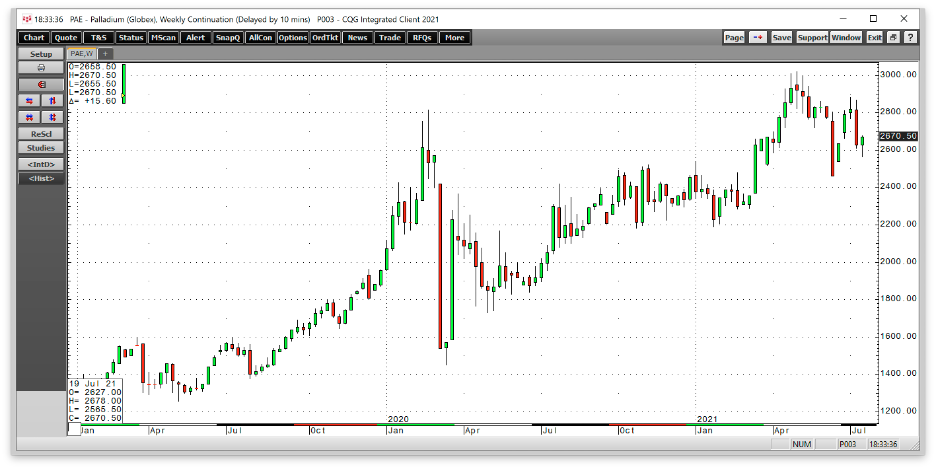 Palladium was 11.5% below the $3019 May high, trading at $2670.50 per ounce on July 21. Crude oil fell from over $76 per barrel in early July to the $65 level, an over 15.5% decline before recovering to just over $70 on July 21. Most other raw material markets corrected on the prospects for higher interest rates, a rising US dollar , and pandemic fears that COVID-19’s return will interrupt the economic recovery.

The Fed will gather at its annual getaway in Jackson Hole, Wyoming, in August. Aside from fishing, hiking, and other bonding activities, the economists tend to use the occasion to roll out monetary policy changes with or without great fanfare.

In August 2020, the central bank informed markets of a not-so-subtle change when they altered the 2% inflation target to an average of 2%, encouraging a return of the economic condition. At the June FOMC meeting’s press conference , a reporter asked Chairman Powell what period the Fed uses when considering the average. The Fed’s chief gave a cryptic answer when he said it was “discretionary.”

The markets assume that the central bank will inform markets about tapering QE and a timetable for liftoff from zero percent short-term rates in Jackson Hole. However, those plans could be on hold if the market action on July 19 started a broader correction that would dampen the inflationary flames. So far, it looks like a one-day wonder.

Meanwhile, even if the Fed tightens credit, the US Congress and Biden administration continue to pursue highly inflationary fiscal policies, which are inflationary even if rates move higher. Moreover, the recent market action suggests that it is pricing in rate hikes. A sell the rumor buy the fact response to a tightening message from the Fed would not be a surprise. If the Fed decides that it is too soon to discuss rate hikes, commodity prices could explode to the upside following the Jackson Hole meeting.

Albert Einstein once said insanity is doing the same thing repeatedly and expecting a different response. I believe the markets interpreted the recent Fed rhetoric as a sign that QE tapering and rate hikes are on the horizon. The Biden administration is running out of time for tax hikes and fiscal initiatives as the 2022 mid-term elections are right around the corner.

Expect lots of volatility in markets across all asset classes over the coming weeks and months. The price tag for the trillion in liquidity and government stimulus programs is inflation. Chairman Powell refused to spell out the timeline for an average of a 2% inflation rate. “Transitory” inflation could also be a “discretionary” event. I believe the period from 2008 through 2012 is a model for 2020 and the coming years. I am a scale-down buyer of dips in the commodities markets, leaving plenty of room to add on price weakness. The tidal wave of liquidity and tsunami of stimulus is bullish fuel for raw material prices. The shift in US energy policy away from fossil fuel production and an initiative to rebuild the crumbling infrastructure will only turbocharge prices. Supply bottlenecks because of the pandemic and demographic trends only increase the potential for higher raw material prices. The bottom line is the current correction could be the eye of a very bullish storm for the commodities asset class.