Many analysts regard the financial sector as the primary user of the blockchain concept. Such an emphasis is partly because the most popular application of blockchain technology has been in the cryptocurrency space.

Fry J and J-P Serbera of the University of Bradford, UK, point out:

"Bitcoin is the first widespread usage of blockchain technology. However, blockchain has an identity and a reach potentially far beyond this. There appear to be two key conditions for blockchain applications. These conditions are convenience and consensus/trust."

Further research by the US National Institute of Standards and Technology highlights:

"Blockchains are tamper evident and tamper resistant digital ledgers implemented in a distributed fashion (i.e., without a central repository) and usually without a central authority (i.e., a bank, company, or government)."

We previously discussed investing in exchange-traded funds with a focus on blockchain. Today, we extend the discussion to another British business that has been among the highest gainers on the London Stock Exchange (LSE). It is the crypto miner Argo Blockchain (LON: ARB ) (OTC: ARBKF ).

The company's share price has become somewhat of a proxy for cryptocurrencies, especially for the price of Bitcoin. Let's take a closer look.

London-based Argo Blockchain mines Bitcoin and Zcash at its facilities in North America. The group prides itself as the only cryptocurrency mining company listed on the LSE. Its market capitalization is shy of £1 billion (or about $1.4 billion).

Argo has recently announced it is investing in a new facility in Texas. Some of the cost will be raised from a new share issuance. Given the share price growth in recent months, such a move makes financial sense. The current higher market valuation allows it to raise money more easily. 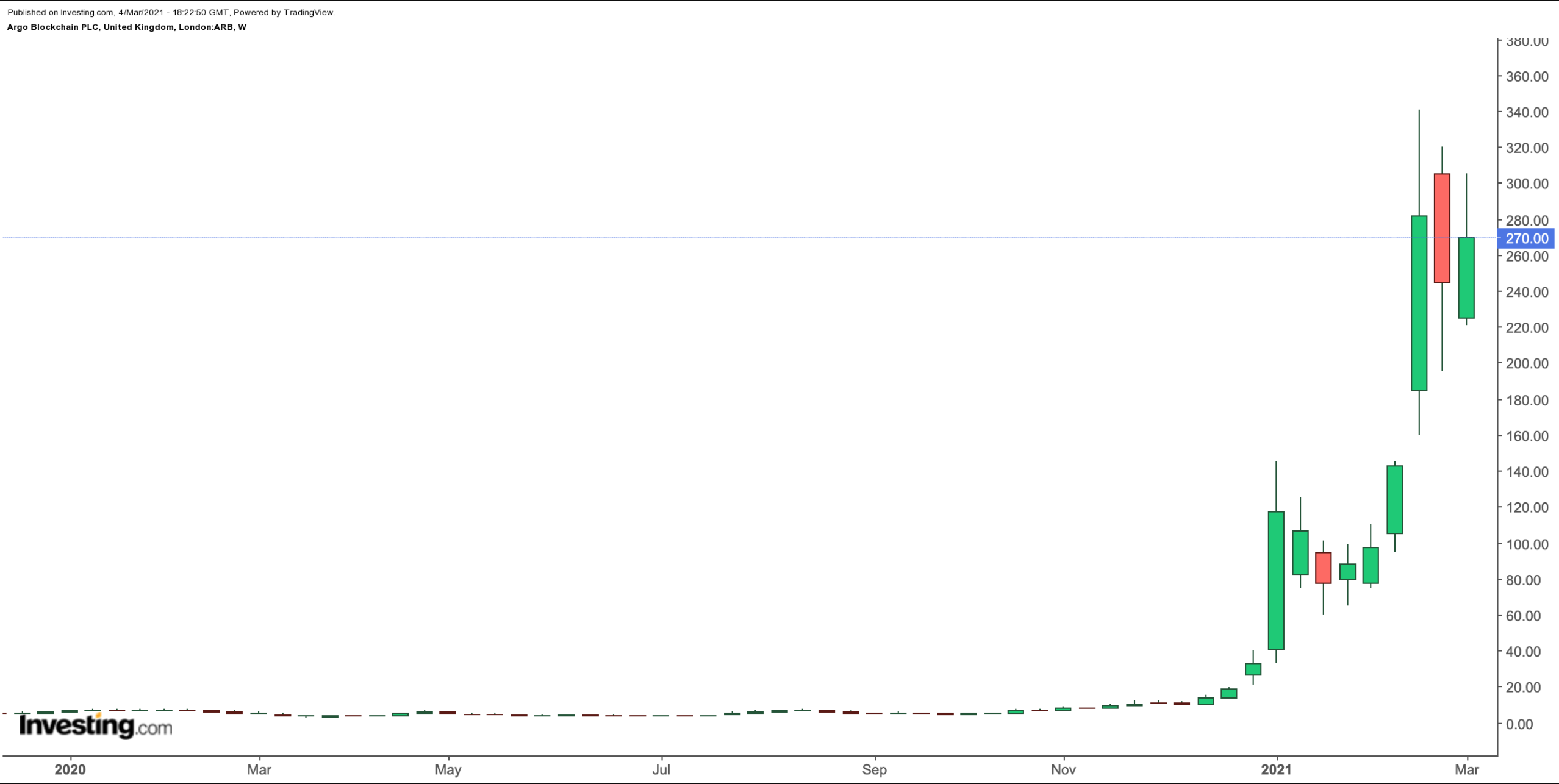 On Mar. 3, the company made headlines when it announced that CEO Peter Wall, as well as other interested employees, would receive salaries in Bitcoin from Mar. 1. Argo "will automatically convert salaries from fiat to Bitcoin at the daily market rate using the Toronto-based Satstreet exchange using their ‘Bitcoin Savings’ service."

According to the latest trading statement, in February, the group "mined 129 Bitcoin or Bitcoin Equivalent (together, "BTC") compared to 93 BTC in January. This takes the total amount of BTC mined year-to-date to 222 BTC... At the end of February, the company held 599 BTC."

What can investors expect from ARB shares in the rest of the year? As Argo's fortunes track the returns of Bitcoin, the stock price is likely to be highly volatile. It is a speculative asset that might be appropriate for some portfolios.

In addition to ARB stock, another Essex, U.K.-based company, Online Blockchain (LON: OBC ), has been in the limelight, too. The company incubates cryptocurrency startups and develops blockchain technology products. 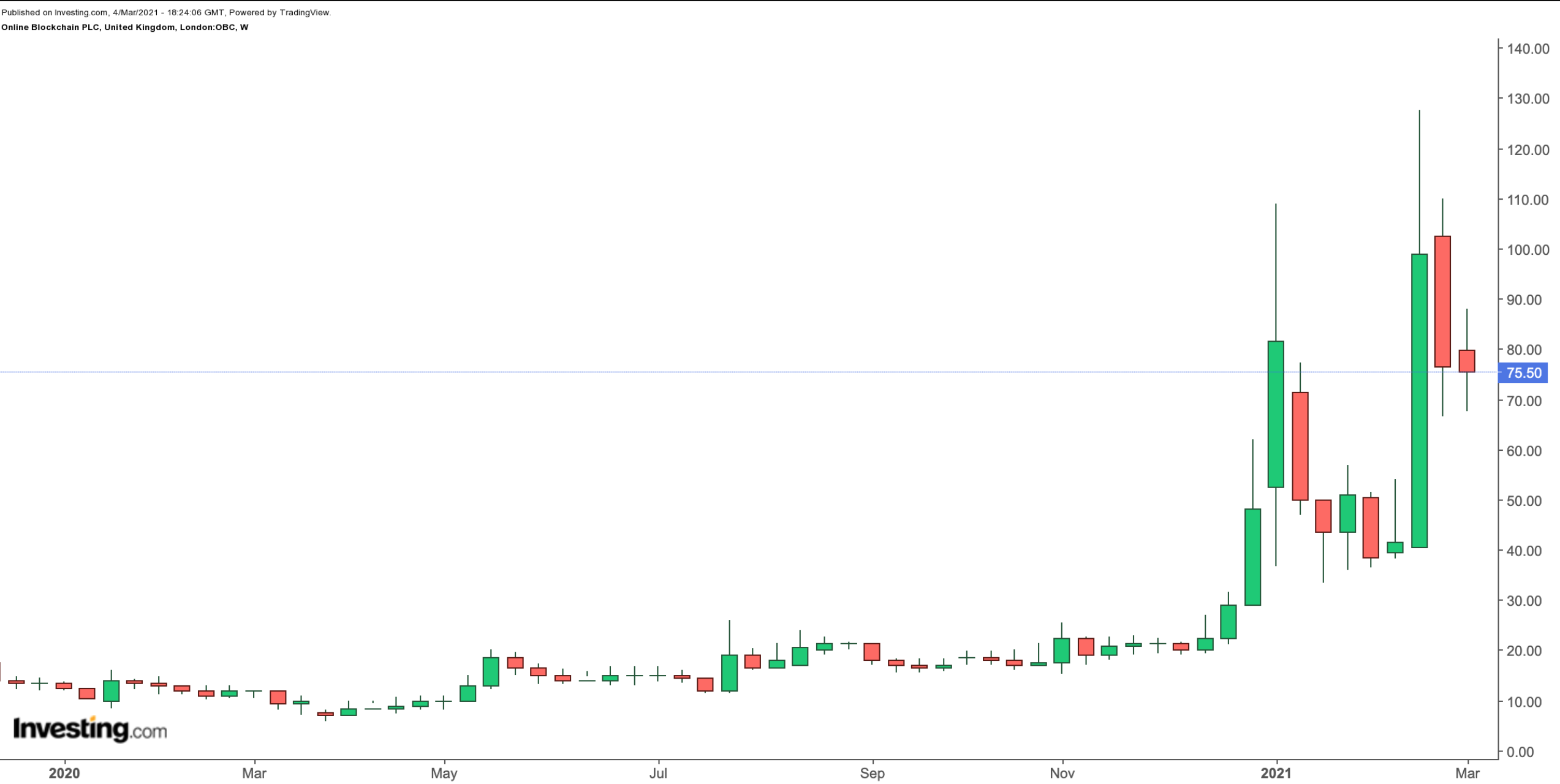 Readers interested in the blockchain, financial technology (fintech) or cryptocurrency space could also consider investing in an exchange-traded fund (ETF). Examples include: