“In commodities, anything is possible, nevertheless, the pendulum swings hard both ways,” veteran commodities strategist and author Carley Garner said in a timely blog published hours before this article. And if I may add to her sagely observation, “timing is everything too in commodities trading”—though that’s probably true of most market opportunities and trading.

As for Garner’s testimony of anything being possible in commodities, the London Metal Exchange (LME) is saying, for the first time in history, that it is considering a consultation on whether Russian metals such as aluminum , nickel and copper should continue to be traded and stored in its system.

The exchange’s statement came late Thursday after three sources familiar with the matter told Reuters that the LME was planning to discuss banning new deliveries of Russian metal so its warehouses cannot be used to offload hard-to-sell stock.

Western countries have sanctioned Russian banks and wealthy individuals connected to President Vladimir Putin since Russia’s invasion of Ukraine, but so far there are no restrictions on buying Russian metal.

For sure, the LME, a venerable 145-year-old institution, has never had to make such an incredibly political, controversial and momentous decision before.

Any move to block Russian supplies from being delivered against LME contracts would “almost certainly prove contentious, potentially exposing the LME to legal challenges from Russian producers”, Bloomberg said in a commentary on Thursday, adding:

“The exchange is already the target of legal action from hedge funds and trading firms over its decision to cancel billions of dollars in nickel trades earlier this year when prices spiked.”

Besides hurting Russian-based metals producers like Rusal and Nornickel, such a move would also likely be a headache for Glencore (OTC: GLNCY ), which buys millions of tons of aluminum from Rusal under a huge multi-year contract, Bloomberg said.

The LME, the world's oldest and largest market for industrial metals, said no final decision had been taken on whether to issue a discussion paper to ask for views on Russian metal, but that it was under consideration.

"A discussion paper could also lay out potential options which could be pursued on the basis of market feedback gathered, including the option to take no action," Chief Executive Matthew Chamberlain said in the statement.

The issue is topical because of current negotiations for 2023 annual supply deals, he added.

The sources who spoke to Reuters said there was some concern that Russian aluminum producer Rusal would not be able to sell its metal and would deliver it to registered warehouses of the LME.

Russia's Nornickel accounted for 7% of global mined nickel production last year, while Rusal, the world's largest aluminum producer outside China, is expected to account for 6% of global supplies of the metal this year.

"The discussions are about the possibility of banning new deliveries," one of the sources said, adding that trying to ban metal already in LME warehouses that had been produced by Rusal "would be madness".

Another source said the LME could not ban Russian metal without sanctions on the companies that produced them.

The LME did not detail the options that would be considered in a consultation.

The LME said its priority was to maintain an orderly market. "We do not currently see any evidence of LME warehouses being used to offload metal on a long-term basis," the exchange added, in response to a request for comment.

Metal movement has remained relatively constant over the last 12 months, the LME said. Some buyers are shunning Rusal's aluminum, while others are securing price discounts.

Rusal and Nornickel did not immediately respond to requests for comment. Russia also produced 920,000 tonnes of refined copper last year, about 3.5% of the world's total, according to the U.S. Geological Survey.

Why are we discussing all these here?

Because benchmark aluminum prices jumped as much as 8.5% to $2,306 a tonne on Thursday, while nickel climbed 6% to $23,115 on fears of a supply squeeze if LME went ahead with the ban.

Both base metals pared their gains before the day’s close. But it was still a mammoth rally for them.

In aluminum’s case, it was the biggest intraday upswing percentage-wise. Nickel, of course, had witnessed even crazier gyrations of up to 70% in a session during the early Ukraine-invasion days of March.

The point is whether it’s worth your while to get into these two metals purely on long-speculative trading ahead of their possible LME ban.

While we can’t predict the decision or workings of the exchange, we can outline price projections and targets for the two metals that would make a speculative long-entry at this point remunerative, if not at least sustainable. For this, we turn to SKCharting.com and its chief technical strategist Sunil Kumar Dixit.

“In the light of LME going hard on Russian metals, there is a strong case for metals breaching through multiple resistance areas as supply bottlenecks could reach extreme proportions.,” Dixit said. 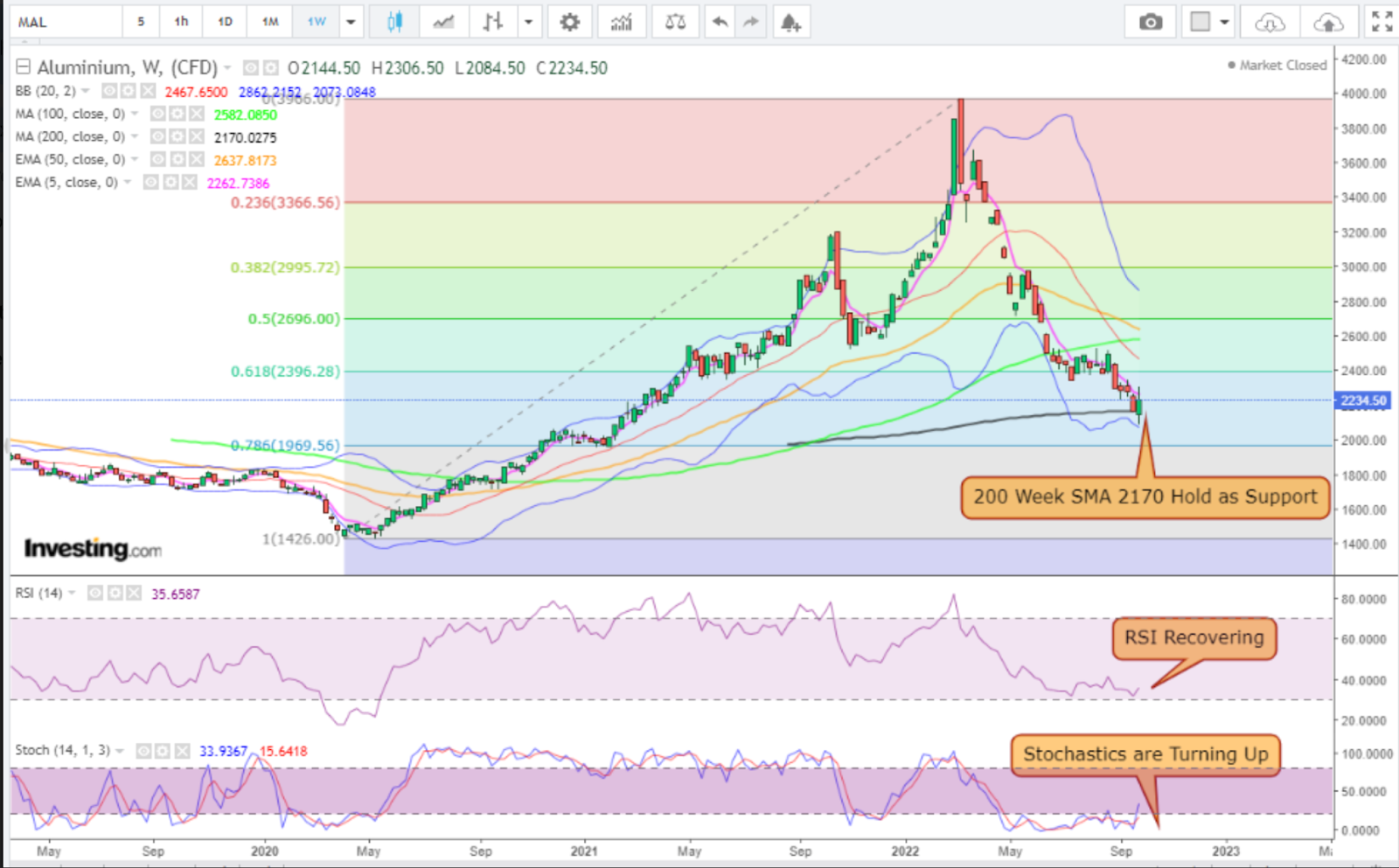 Charts by SKCharting.com, with data powered by Investing.com

At Thursday’s settlement, three-month aluminum on the LME settled at $2,197 after the initial surge to $2,306.

“Aluminium is strategically worth accumulating as prices have undergone 61.8% Fibonacci retracement of $1426-$3966,” Dixit said, adding:

“There is only limited room for a further drop to $1,995, which corresponds to the 100-month Simple Moving Average. On the way up, $2,396 should be the first barrier as this is horizontal resistance, above which $2,696 would set the stage for a strong rebound towards the psychological level of $3,000.”

He said aluminum’s monthly stochastics’ reading of 7.9/7.3 were in the same zone that had triggered massive bullish reversals in the past. 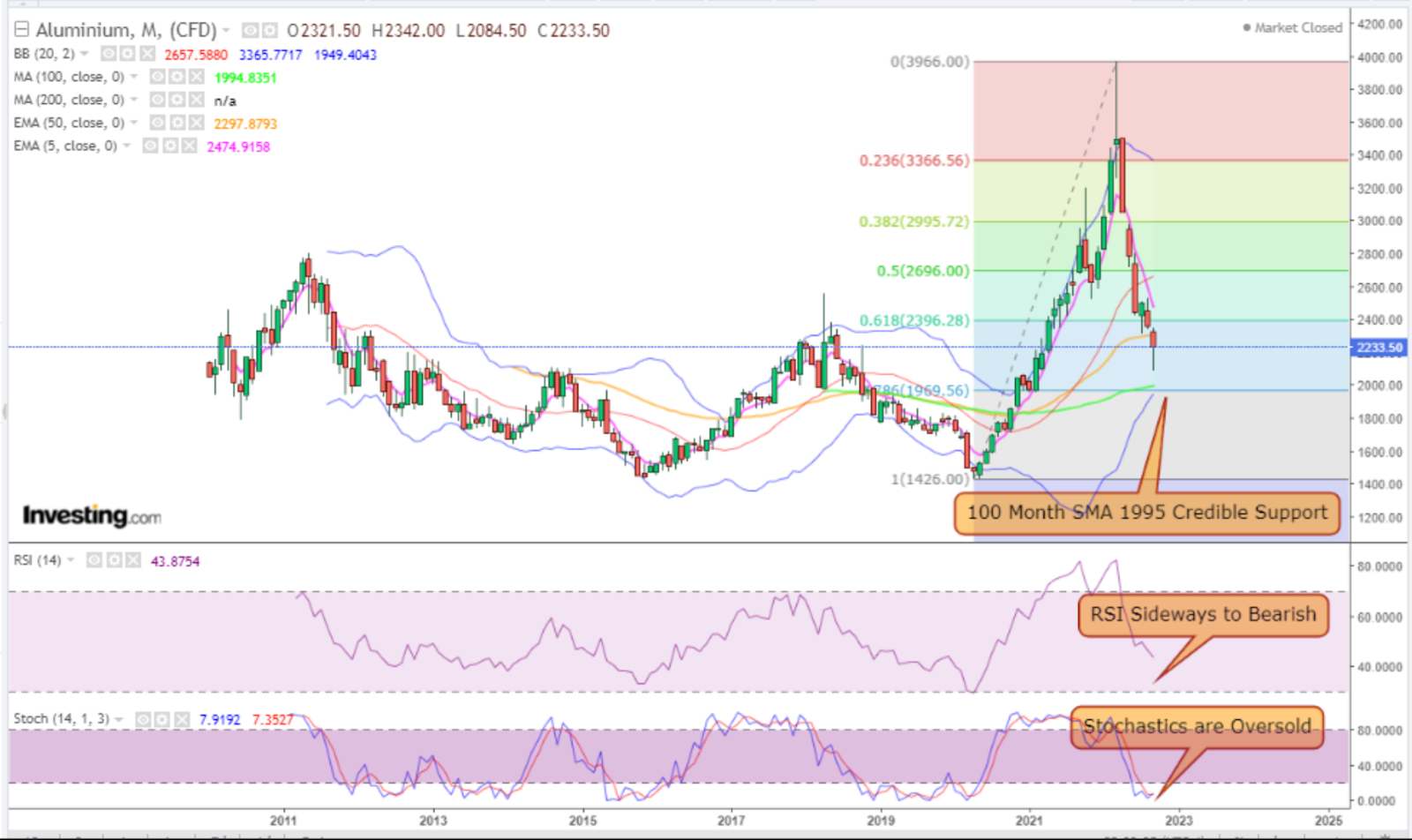 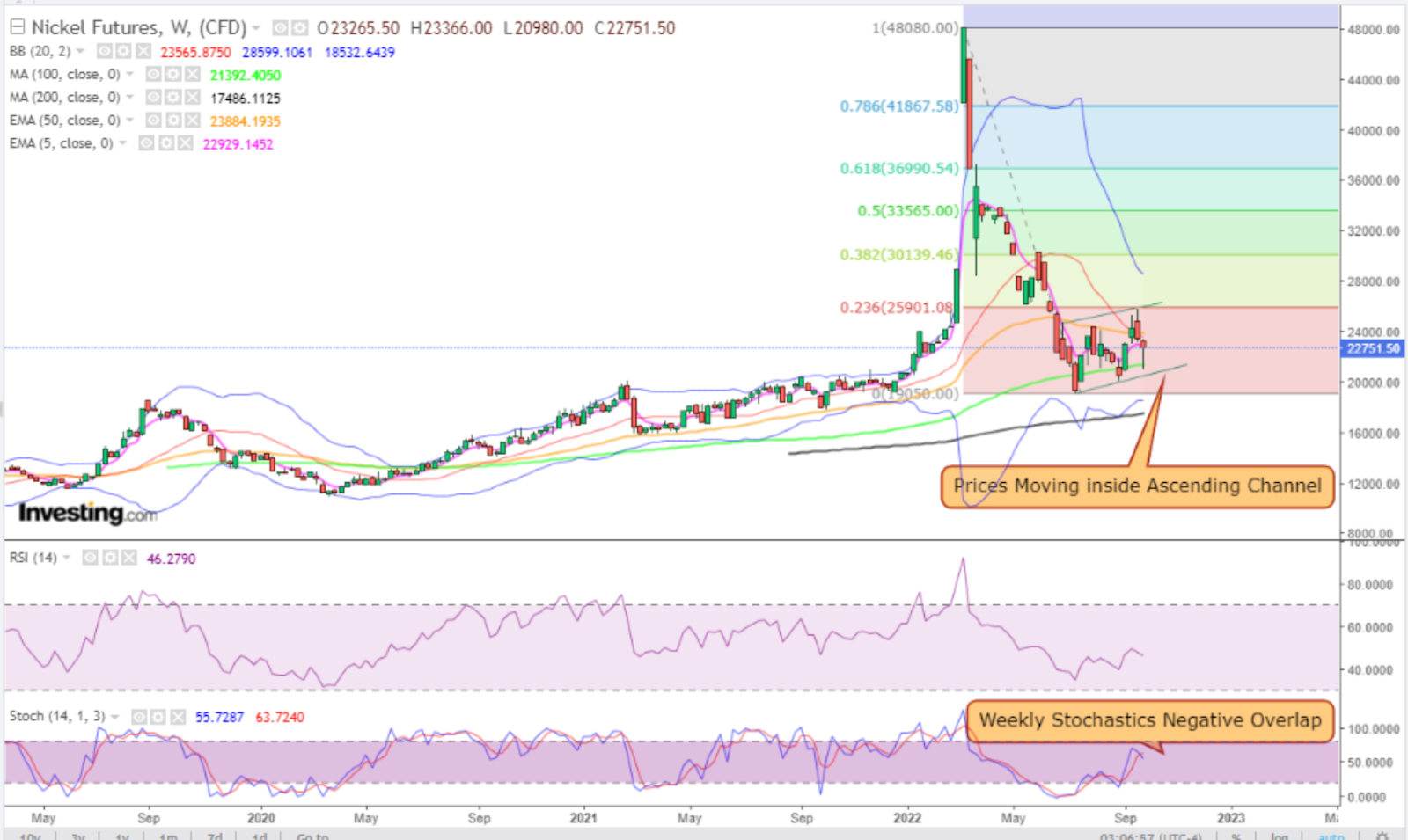 “Nickel is all set to end the month with a potentially ‘Bullish Engulfing Candle’,” said Dixit.

“The monthly stochastics reading of 20/20 hints at positive overlap on the next month’s beginning.” 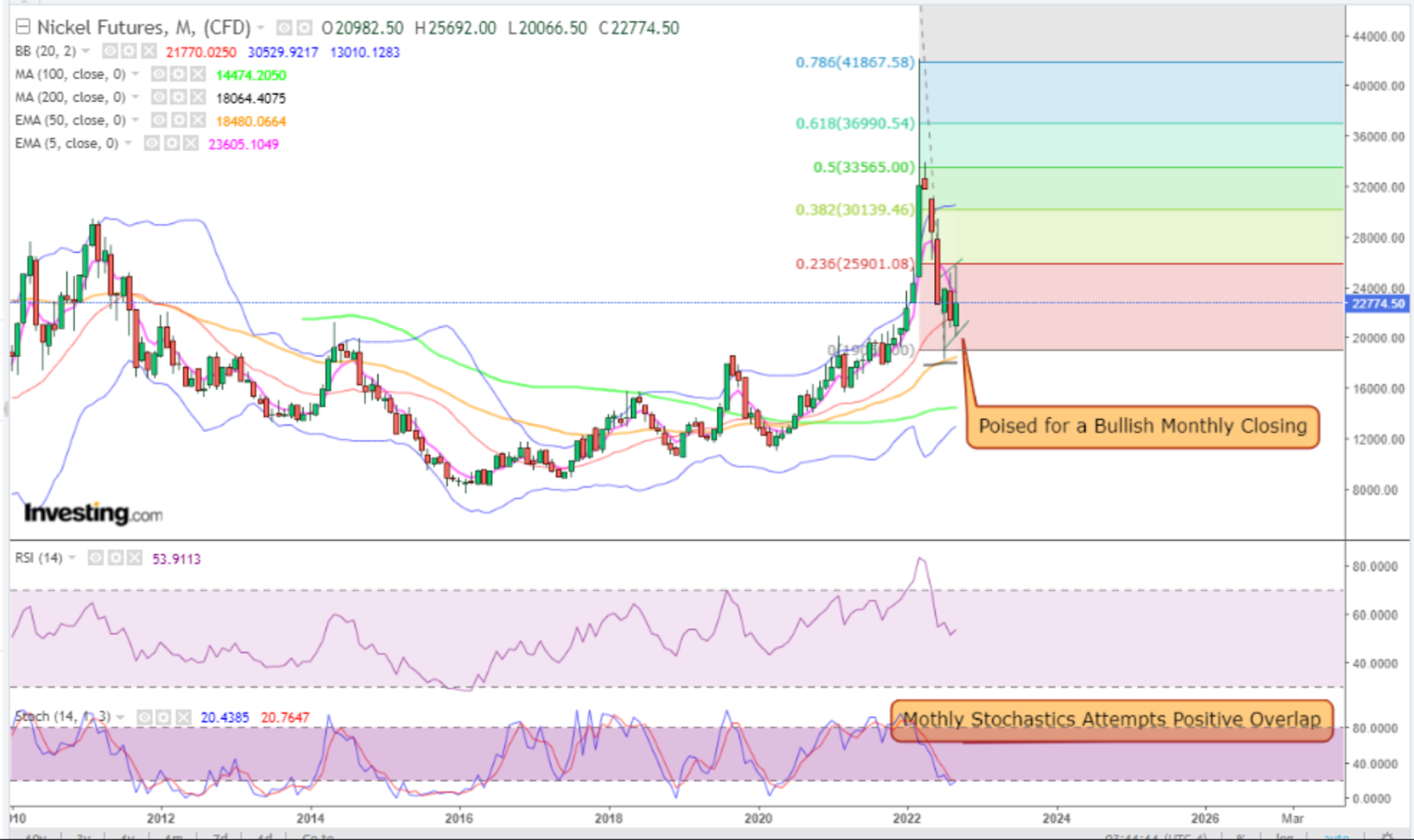 With prices having tested the 23.6% Fibonacci retracement, the monthly Relative Strength Indicator has also rebalanced its overbought conditions, he said.