If you have cash sitting on the sidelines waiting for the right opportunity to scoop up some high-yielding long-term plays, we suggest you take a closer look at Apple (NASDAQ: AAPL ). 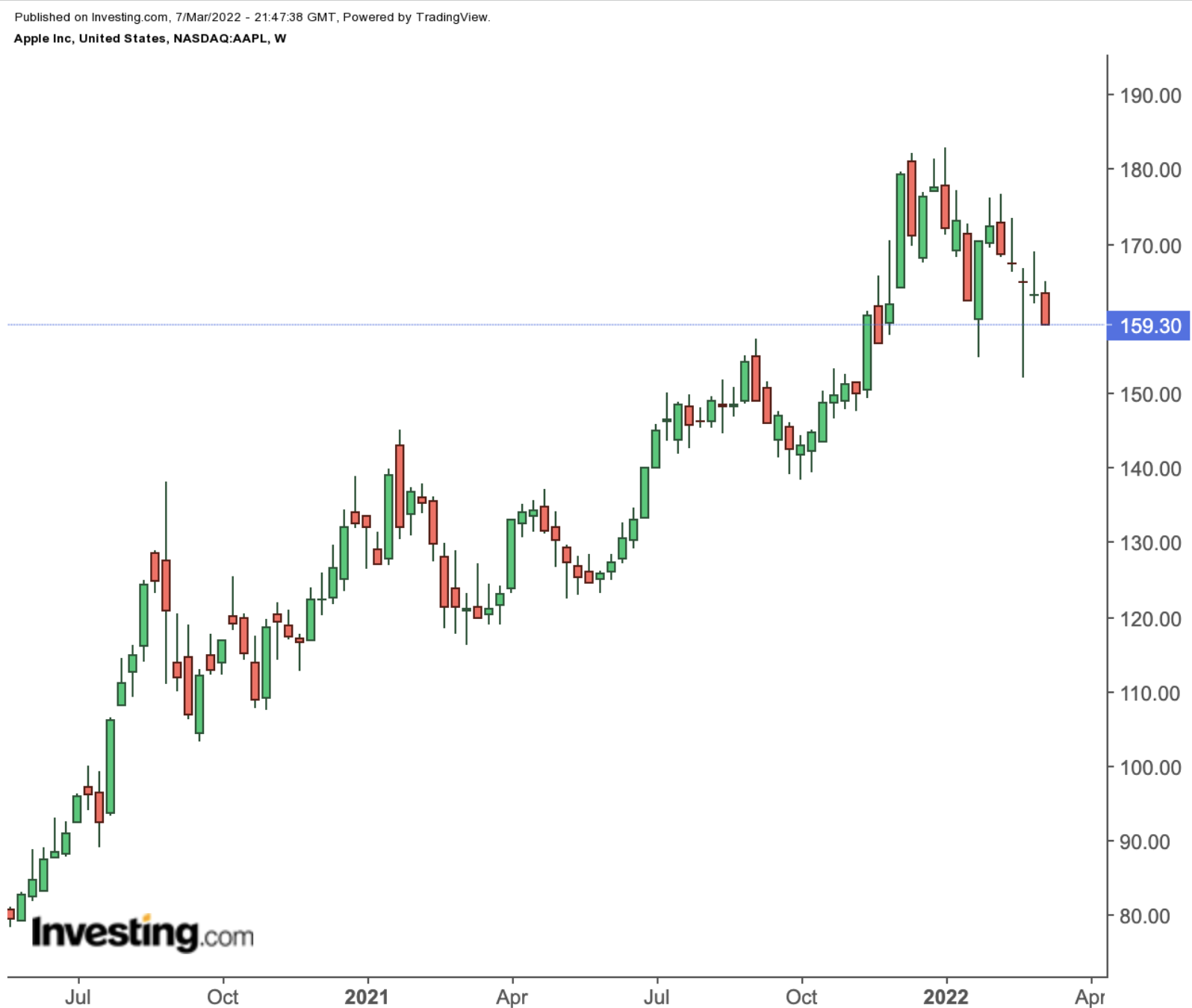 The world’s largest company by market capitalization has many characteristics that make it an outstanding defensive play during times of crisis. With more than $200 billion cash in hand, Apple is in the enviable position of being able to increase its share repurchase program, further supporting its valuation in the long run. Moreover, the positive outlook of Apple’s last earnings report displays its resilience in the current high inflationary environment.

Just how long this general sell-off in technology stocks continues is anybody’s guess. Still, there is a strong case for believing that Apple shares will outperform even if the current bearish spell extends.

Many investors believe Apple is simply a high-growth technology company which they should steer clear of when trouble hits. In our view, Apple is more a consumer goods company, offering a haven amid the rout in technology stocks.

With 1.8 billion Apple devices in customers’ hands—including computers, tablets, as well as its iconic smartphone—the company has a wide economic moat and financial muscles to survive economic shocks and generate consistent growth. During the ongoing chip shortages affecting many tech companies, the tech giant navigated the crisis, benefiting from a flood of new products, including the iPhone 13, Apple Watch Series 7, and updated Macs.

This stickiness of Apple’s ecosystem is the main reason that Warren Buffett, the world’s most successful value investor, has held on to his stake in the company since 2016, making AAPL the biggest holding in its portfolio.

Buffett’s investment firm, Berkshire Hathaway (NYSE: BRKb ), had amassed more than a 5% stake in Apple by mid-2018 with a valuation of $36 billion. The current market value of that stake is now more than $140 billion.

The impressive run that Apple’s stock delivered over the past decade reflects the power of Apple’s capital return program. The company has been one of the biggest buyers of its own shares in the S&P 500 by far. Apple spent $85.5 billion to repurchase shares and $14.5 billion on dividends in its fiscal 2021, which ended in September.

Due to its robust capital-return program, consistent sales growth, and hefty cash balance, Apple has been one of the most favored mega-cap stocks. In an Investing.com survey of 44 analysts, 37 rate Apple “outperform” with a 12-month price target that implies about 21% upside potential. 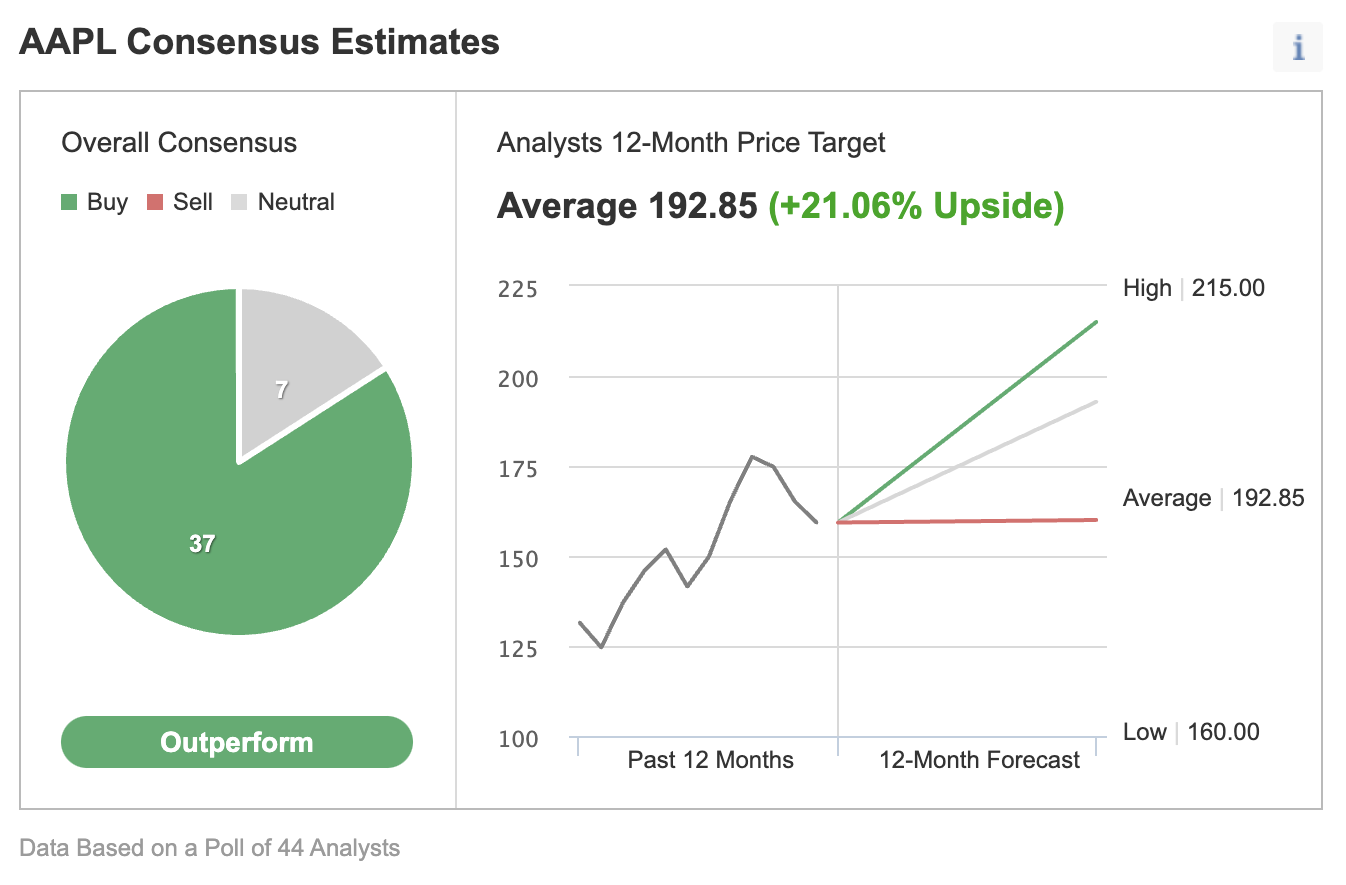 Analysts also point to the company’s high-growth opportunities. These include its potential venture into autonomous vehicles and its planned foray into the metaverse via augmented reality and virtual reality products.

Buying Apple stock during this bearish spell is a good strategy if you plan to hold on to your position over the long run. Apple’s vast consumer appeal, its robust share buyback plan, and future growth opportunities are among the factors that will help its stock rebound quickly once this bearish spell is over.