Having fallen around 21.6% this year, the largest company in the US, Apple Inc (NASDAQ: AAPL ), has fared much better than most of its mega-cap technology peers amid the ongoing market rout. 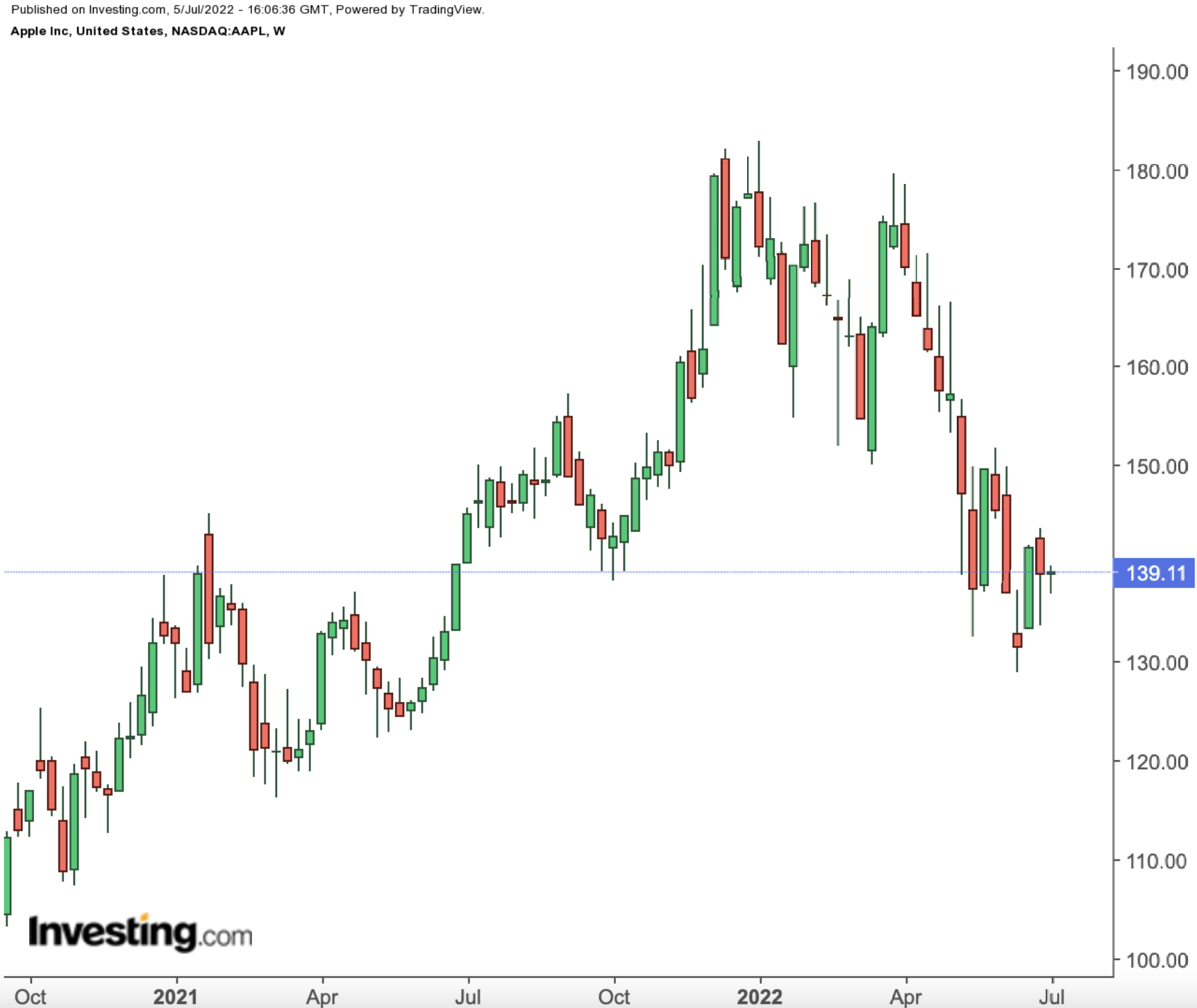 Several reasons indicate that the iPhone maker is in a good position to weather the current macroeconomic storm. The Cupertino, California-based company has a massive user base, a remarkable ability to pass on higher costs to its relatively wealthy customers, and a massive cash pile—which can lead to share buybacks and increased dividends.

Furthermore, Apple bulls argue that demand for iPhones, wearables, and other gadgets and services remains strong. Market forecasts for the company’s flagship iPhone sales have hovered closer to 240 million units for this year, driven by an expected significant update to the phone in the fall.

While the outlook remains positive, increasing macroeconomic risks could derail the company's optimism. The biggest one is how Apple consumers will react to inflationary pressures—something they haven't experienced before.

The last time the inflation rate was this high, Apple had been a public company for less than a year, and its best-selling product was the Apple II home computer. In May, the annual inflation rate hit 8.6%, the highest level since 1981, with other major economies facing a similar trend.

That is perhaps why the analyst community remains divided on Apple’s earnings outlook. While most still rate Apple stock as a “buy” in an Investing.com poll of 48 analysts, some have trimmed their price targets in recent weeks. 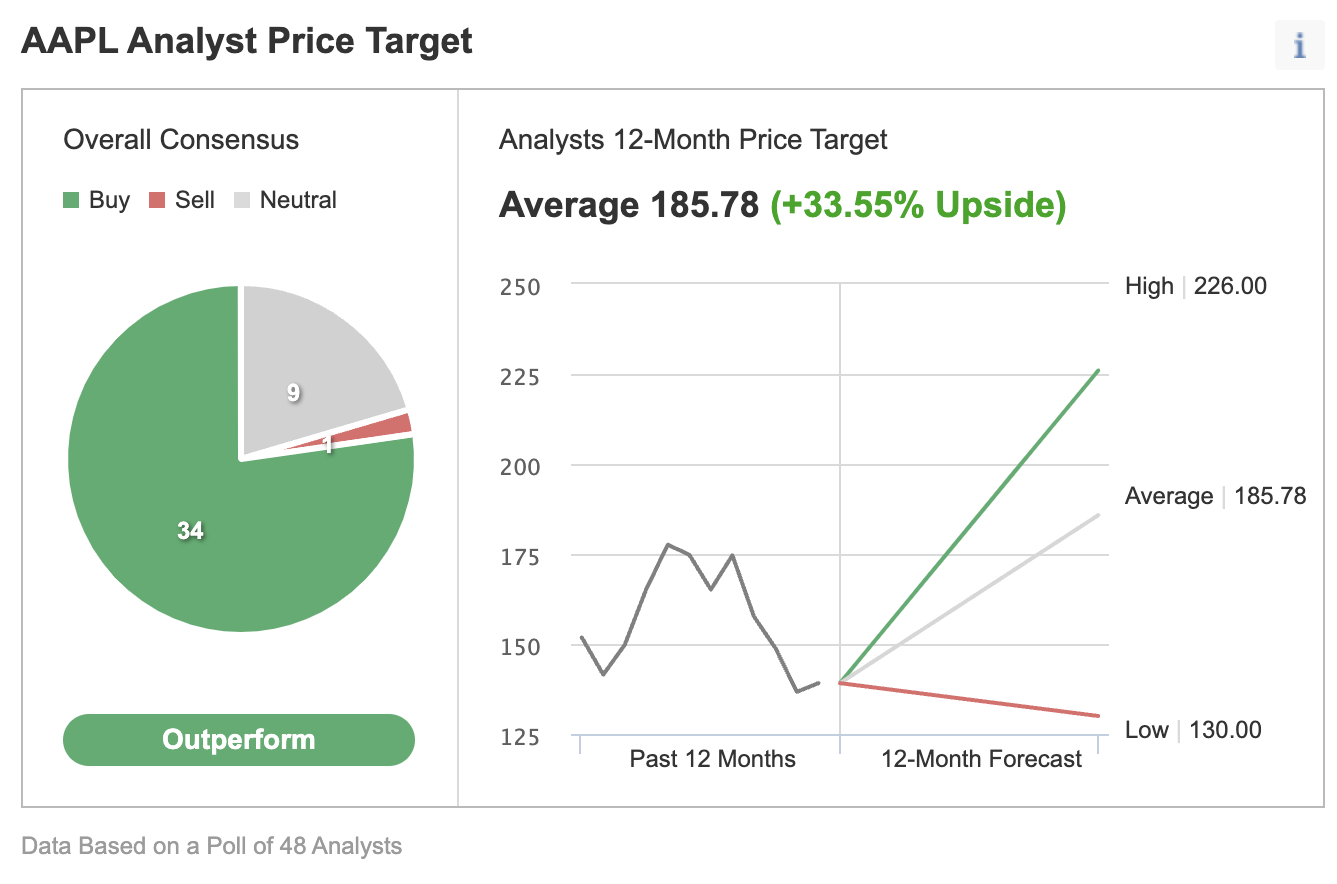 Over the past three months, analysts have progressively cut their estimates for Apple’s fiscal third-quarter earnings by 7.8%. Revenue projections are down about 4.2% over the same period.

KeyBanc Capital Markets sees signs of softer US demand, citing credit card data spending. Others have raised concerns about the pace of revenue growth at the company’s App Store, with Morgan Stanley adding that this poses risks to its estimates for Apple’s Services business.

Micron Technology Inc (NASDAQ: MU ), the largest US maker of memory semiconductors used in computers and smartphones, told investors last week that it’s seeing a slowdown in demand and expecting its customers in the PC and smartphone businesses to adjust their inventories.

If inflation starts pressuring Apple customers, they could begin to put off their iPhone upgrades hurting the company’s sales projections for this year.

Apple also faces increasing costs from global logistics, rising employee salaries, and supply constraints related to the China shutdowns this year. In April, the company told investors that the combination of headwinds could result in a revenue decrease of around $8 billion.

On the other hand, JPMorgan reiterated its overweight rating on Apple, saying in a note last Friday that the tech giant will remain resilient due to its already conservative future guidance provided during last Q2 earnings release . The note added:

“Contrary to popular investor sentiment and expectations of downside to estimates on account of a slowdown of consumer spending and FX headwinds, we believe near-term estimates are instead resilient relative to the conservative guide already issued by the company on the last earnings call.

[...]We see upside on several aspects of the business as well as financials that remain underappreciated by investors, namely the transformation of the company to Services, growth in the installed base, technology leadership, and optionality around capital deployment—all of which together lead us to expect double-digit earnings growth and a modest re-rating for the shares.”

JPMorgan also maintained a December price target of $200 on Apple, implying a roughly 43% upside potential from the current price.

It’s hard to predict how badly the current adverse macroeconomic environment will hurt Apple sales in the short run. Still, Apple is a reliable company well-positioned to outperform in a challenging operating environment.

Looking to get up to speed on your next idea? With InvestingPro+ you can find

And a lot more. Get all the key data fast so you can make an informed decision, with InvestingPro+. Learn More »