Samor Reality Limited, a small-scale company, is slated to hit capital markets at the end of September. The company’s IPO will open on September 30 and close on October 5. It is a fixed price issue IPO that is priced at Rs 62 per share. Samor Reality intends to issue 1.3 million equity shares of Rs 10, each aggregating up to Rs 8.06 crore. The market lot size consists of 2,000 equity shares. A retail-individual investor can apply for up to one lot of 2,000 shares amounting to Rs 124,000. Samor Reality is promoted by Birjukumar Shah and and Jagrutiben Birjukumar Shah. Post issue, the promoters’ shareholding will reduce to 53.37% from 76.5% earlier. The IPO proceeds will be utilized for investment into promoters’ subsidiary M/s Samor & Motherland LLP and general corporate purposes. The shares will be listed on the BSE SME exchange.

Samor Reality Limited is an integrated construction and real estate development company focused mainly on constructing and developing residential and commercial projects in and around Ahmedabad, Gujarat. Incorporated in the year 2014, the company belongs to Ahmedabad-based Samor Group. Its projects are marketed under the brand name of “Samor,” such as Samor Heights. The company also trades in building and construction materials, specifically TMT Bars, HR Sheets of different sizes. For fiscal 2021, the company received its entire revenue from trading activity. Samor Reality has 60% holding in Samor & Motherland LLP. The latter conducts business as builders, contractors, designers, decorators, furniture, consultants, constructors, investor, and brokers of real estate and all types of buildings and structures. 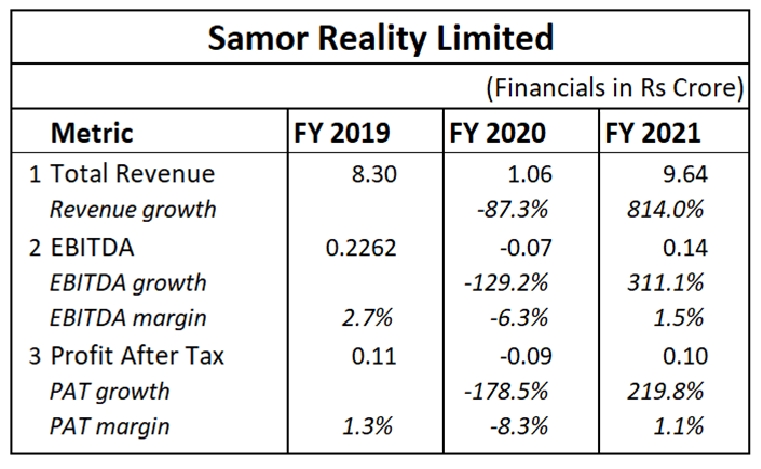 Investors should note here that the company mentioned that its projects are marketed under the brand name ‘Samor’ in its prospectus. However, the newly launched project by its subsidiary does not bear/prefix the brand name ‘Samor.’ It is an interesting fact to ponder upon. Samor Reality has launched its second construction project more than three years after the completion of the first project. Again the point is worth noting. Successful execution of real estate projects is susceptible to interest rate changes. The coming period will be an era of high interest rates. Secondly, while going through the draft prospectus, we noticed that Samor Realities owe Rs 0.37 crore to creditors other than Micro and Small & Medium Enterprises as of March 31, 2021. Considering the company’s scale of business operations, this is a considerable amount. Investors are advised to take a call after considering all the aspects.