Amazon (NASDAQ: AMZN ) stock is offering an interesting risk-reward proposition right now. Shares are going through a bearish spell triggered by the e-tail giant's Q2 earnings release on July 29, which included guidance from Amazon indicating that the Seattle-based company is entering a slow patch. 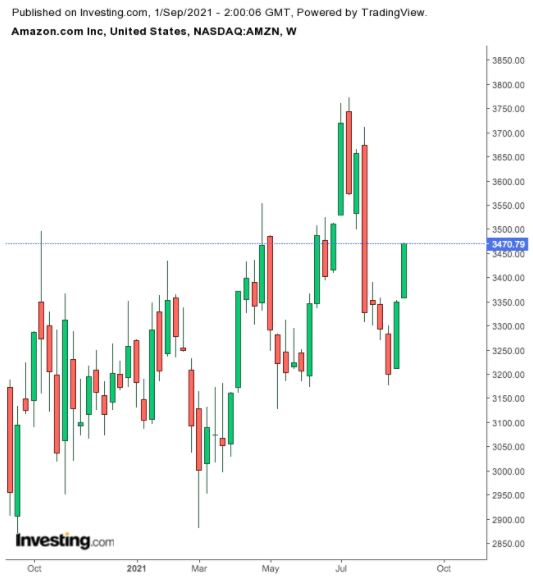 Management noted AMZN could find it hard to beat expectations after a year-long boom in online purchases, fuelled by the pandemic-driven buying frenzy. Indeed, so far this year, Amazon has underperformed its peers in the trillion-plus-market-cap club.

Still, a majority of Wall Street analysts are bullish on the company’s future growth prospects, recommending it to clients and tagging it as a buy. 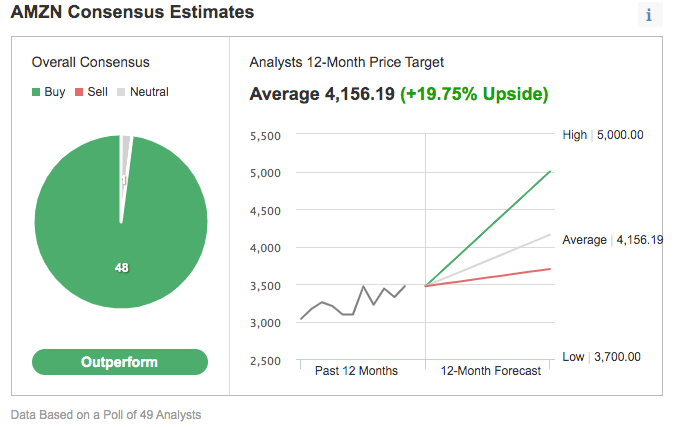 Of 49 analysts polled by Investing.com, 48 had a buy rating on AMZN, labelling it a stock that will 'outperform.' Their consensus 12-month price target shows a 21% surge from where the stock is trading today.

It’s hard to predict how accurate analysts’ bullish estimates will prove in the year ahead, but Amazon’s latest guidance shows that the company could find it hard to beat expectations after a year-long boom in online purchases, fueled by the pandemic-driven buying frenzy.

Indeed, during its second-quarter earnings call in July, Amazon provided a rosy outlook, something that would have satisfied growth-hungry investors. Shareholder focus was on the company's core e-commerce business, which is indeed slowing, especially at the same time that founder Jeff Bezos has handed over the chief executive role to long-time lieutenant, Brian Olsavsky. In a conference call, the new CEO didn’t mince words regarding the situation, telling analysts the slowdown in sales will continue through the remainder of the year.

The e-commerce company’s disappointing outlook came along with revenue that missed estimates for the first time since 2018. Analysts have pared back their expectations in the wake of the report. For Amazon’s current quarter, the average earnings estimate has dropped about 16.5% over the past month, according to data compiled by Bloomberg. The revenue consensus has fallen by nearly $6.5 billion, or 5.5%, over the same period.

But overwhelmingly positive sentiment among analysts shows that this weakness in one of the best mega-cap stocks is a buying opportunity. Even as growth decelerates from pandemic-era levels, analysts see long-term growth for its online retail and cloud-computing divisions, along with its advertising business, which is currently thriving.

According to Susquehanna analyst Shyam Patil, the stock has a 50% upside from here, and he thinks now is a “great time to buy” shares.

His recent note to clients stated:

“Looking at the two-year compounded annual growth rates, trends are still very strong and we see no reason to be concerned. Ultimately, we continue to see Amazon as a long-term secular grower underpinned by its strong e-commerce, cloud and advertising businesses.”

Susquehanna’s forecast is among the most bullish on Wall Street, but many analysts agree that Amazon continues to remain their preferred e-commerce play despite the recent slackness in growth.

Evercore ISI, which has an “outperform” rating with a $4,200 price target, said in a recent note:

“Our long-term thesis is intact for Amazon....Tactically, AMZN shares may well be range bound near term as investors debate whether AMZN can recover to 20% reported Y/Y revenue growth in 2022. We believe it can, given the size of its TAMs (total addressable market), its new growth initiatives and its execution track record.”

After remaining an underperformer this year, Amazon shares present as a more attractive option among the mega-cap tech behemoths. There is a good likelihood the stock will catch up to its peers, especially as the pandemic continues to rage in many parts of the world, accelerating the ongoing shift to e-commerce and cloud-computing.