The latest earnings update from the semiconductor manufacturer Advanced Micro Devices (NASDAQ: AMD ) shows that the slump in demand is much deeper than it had expected, dashing hopes of a quick recovery in its beaten-down share price.

The California-based AMD late yesterday gave its preliminary sales numbers for the third quarter that missed projections by more than $1 billion. Revenue in the period, which ended on Sept. 30, was about $5.6 billion, lower than the average analyst estimate and the company’s own forecast, which was for $6.7 billion.

The steep decline in sales from one of the most-loved chip-makers shows that the worsening macroeconomic conditions are destroying demand quickly and forcing companies to hold back on their spending. The worst-hit area, according to AMD, is the PC market, where weakening demand and a build-up of inventory are causing chip buyers to move on the sidelines. 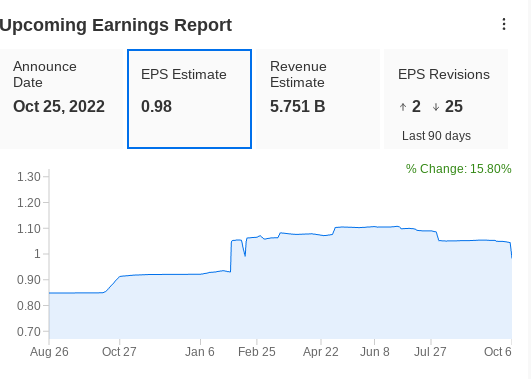 Recession fears are forcing tech companies to cancel or postpone orders, a sharp reversal from the post-pandemic spending binge, when businesses were building inventories in anticipation of soaring demand.

AMD shares were trading about 8% lower at the time of writing, extending their year-to-date losses to about 56%. These losses are worse than the Philadelphia Semiconductor Index , which is down 39% this year.

After considerable weakness in the PC segment, investors are closely watching demand signals from cloud-computing, automotive and factory automation to gauge whether the current slowdown is broad-based and could hit areas that have remained solid so far.

These uncertainties are making it hard to call a bottom in the chip sector, which is known for its boom-and-bust cycles and whose fate is so closely tied with the economy.

Still, many analysts believe the current market conditions are well-reflected in the share price of AMD, which trades at 13 times its forward earnings. Bank of America reiterated AMD as a buy after its disappointing sales outlook yesterday.

In an Investing.com poll of 45 analysts, more than 60% still rate AMD as a buy with their 12-month price target, implying a 77% upside potential. 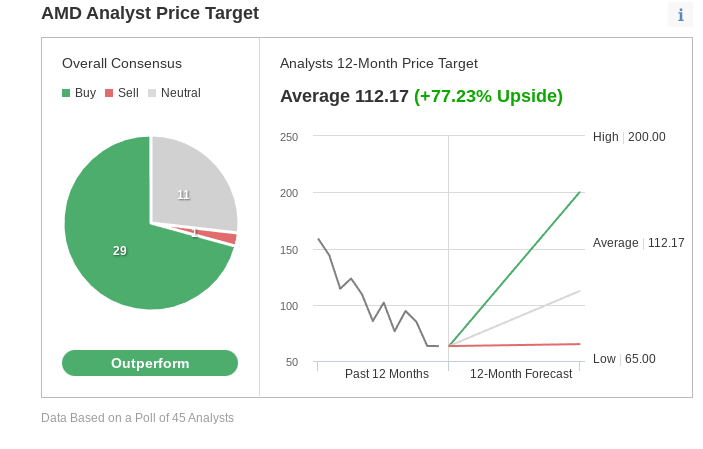 Stifel, in a recent note to clients, said AMD will continue to expand profitability and market share even in the weakening demand environment when compared with its competitors.

“Despite near-term demand volatility, we expect share gains to drive growth well above market, and we expect gross and operating margin expansion to continue, which ultimately, should drive multiple expansion, in our view.”

AMD has been an analysts’ favorite in both up and down cycles due to the company’s success in grabbing market share from the industry titan Intel Corp (NASDAQ: INTC ). Though AMD is not immune to macro headwinds, there are enough reasons to believe that it will be able to sustain its fundamental outperformance.

In a recent note to clients, BMO Capital Markets made similar arguments as the investment bank remains bullish on AMD’s long-term prospects.

According to its note:

“Our view is that we see a path to sustained share gains against Intel...and we do not need Intel to mis-execute for the thesis to work. Our sense is that with the several key architectural innovations the company has made, along with rolling out a lineup of products that has enabled the company to not only close the gap but get ahead in many cases, AMD’s credibility with customers has continued to climb.”

It’s quite hard to remain bullish on the chip sector in the current environment when demand is shrinking and stock prices are collapsing. But this is the time for long-term investors to go and pick stocks that have the power to get back on a growth trajectory quickly. AMD is one such stock, in my view.

Disclaimer: At the time of writing, the author doesn’t own AMD shares. The views expressed in this article are solely the opinion of the author and should not be taken as investment advice.