It will be a busy week, that’s for sure. There will be plenty of data, including new home sales , pending sales , PCE , and the University of Michigan .

On top of that, there will be a slew of Fed officials talking daily. There will also be multiple Treasury auctions which have become must-watch events, especially with a 2-year auction on Monday, a 5-year auction on Tuesday, and a 7-year auction on Wednesday. These can all impact market directions, for better or worse.

The S&P 500 fell nearly 5% last week and finished at 3,693. It would have been worse if not for an end-of-day, short-covering event, with traders’ monetizing puts heading into the close. It is relatively easy to spot when the VIX drops drop more than 7%, starting precisely at 3 PM. 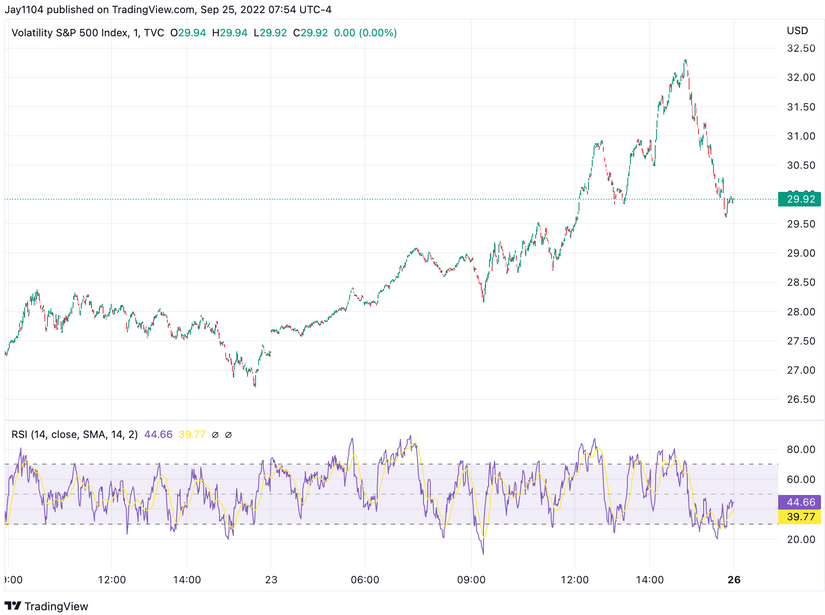 The S&P 500 may have finished wave three down and may now be entering wave 4. I think it is more likely that this wave 4 plays out as a sideways consolidation, perhaps for a couple of days. If that is how this goes, a wave five that equals the length of wave 1 could take the index to around 3,200 to 3,300 by the end of the first week of October. That would work nicely with the ascending broadening wedge pattern we have talked about now for several weeks. 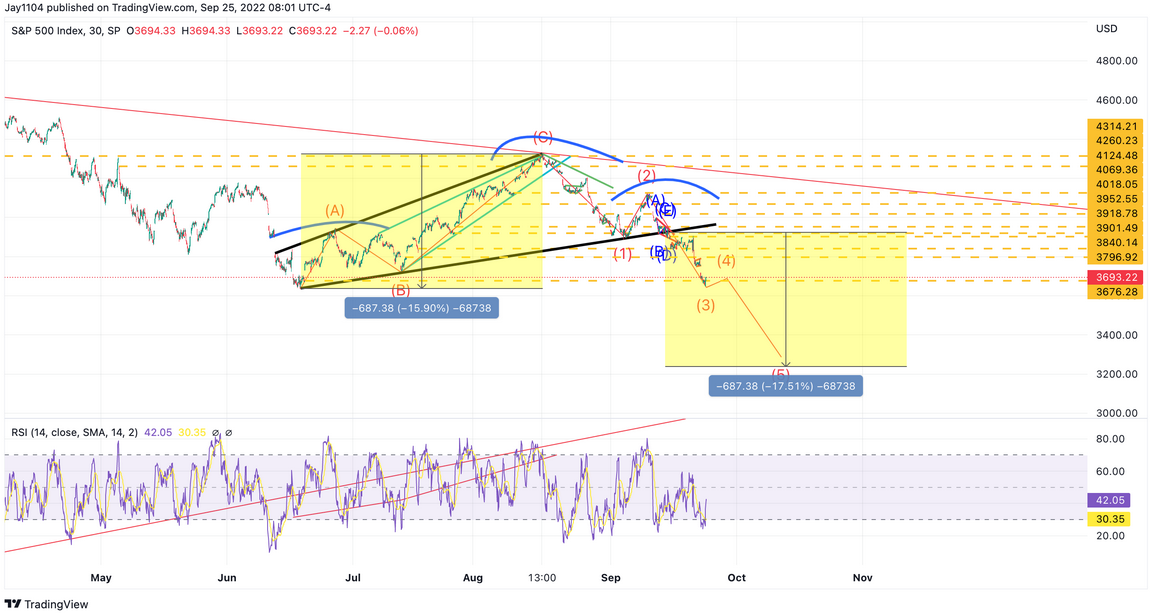 It would also work with the 2008 analog we have been tracking for some time. The analog suggests the S&P 500 bottoms around the third week of October, but the 2022 S&P 500 has been running about 2 weeks ahead in some cases. So a low in the first or second week of October would not be all that surprising. The analog also suggests there should be a pause at this point in the move down, which lines up nicely with a potential wave 4.

Additionally, this week reserve balances fell to $3.0 trillion, the lowest in the cycle and levels not seen since November 2020, when the S&P 500 was trading around 3,500. 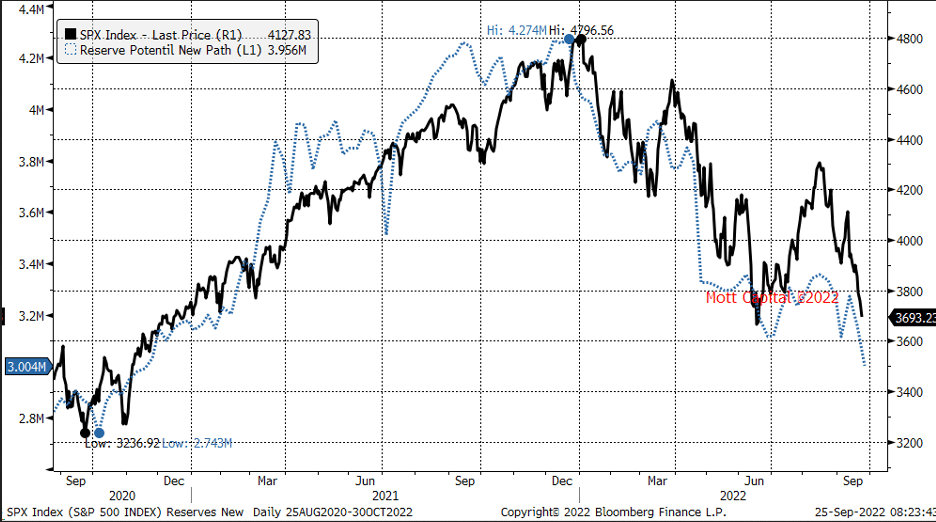 Plenty of items have been good indicators to suggest the June bottom would not hold, with the TIP ETF being one. The TIP ETF made another new low on Friday, and the QQQ has been trading about 12 days behind the TIP, suggesting the QQQ has further to fall. 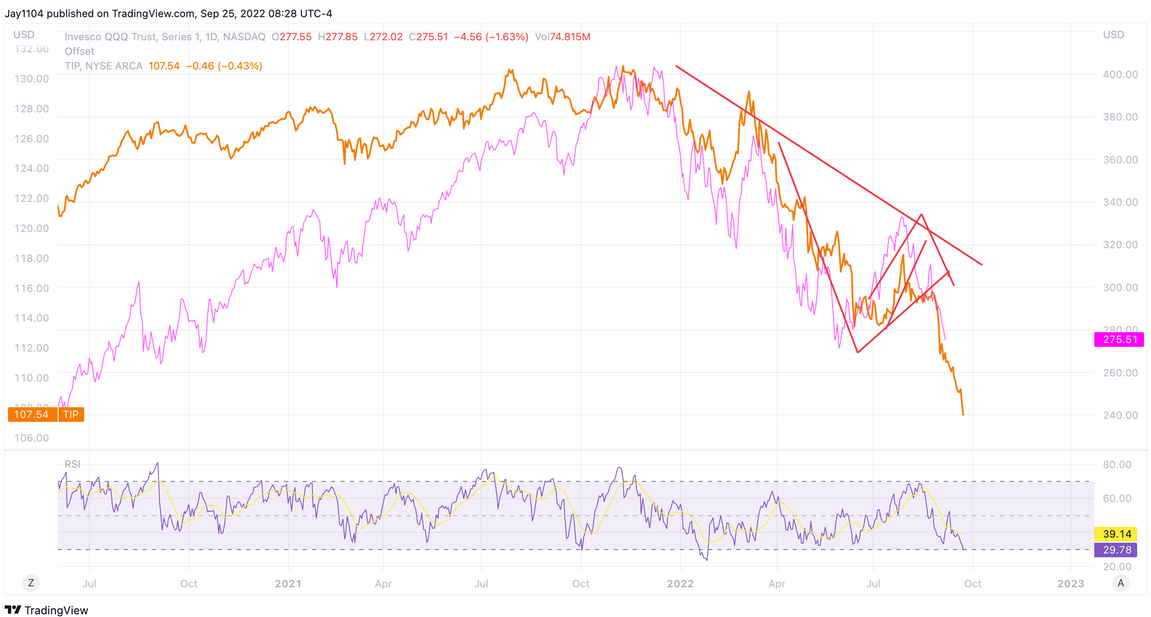 Also last week we saw a massive move higher in credit spreads, with the SHY to HYG ratio ramping up. It is probably a good indication the VIX is heading higher, should those spreads continue to widen. 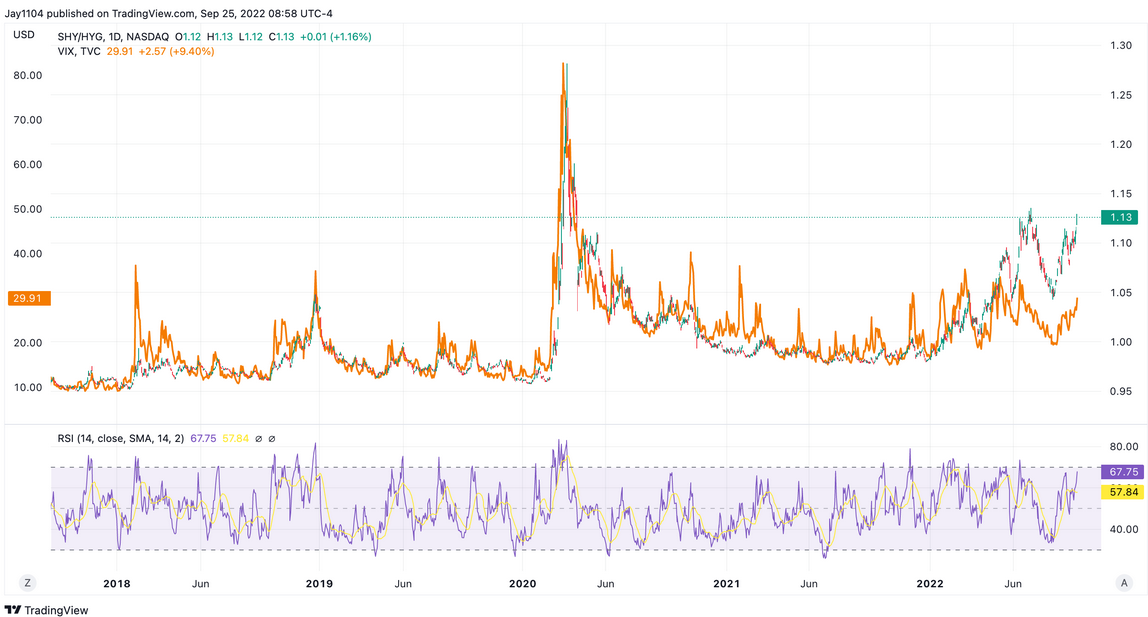 The JPMorgan CDS hit a new cycle high on Friday, and this is worth watching as the higher the swap rises, the lower the stock price shall fall. The chart below shows an inverted price for JPM ’s stock and the CDS. The CDS is historically a low value for the CDS and does not suggest a credit event is likely to happen. But what does tell us is that volatility is rising. 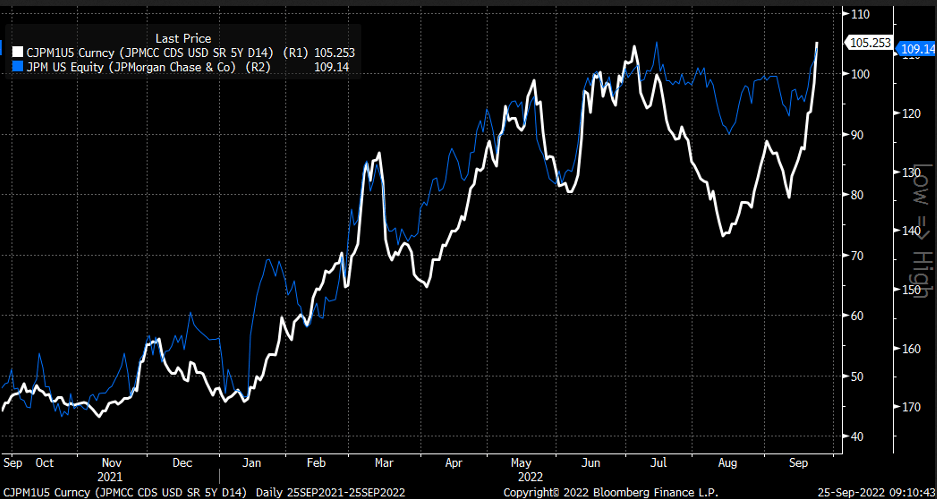 Shopify (NYSE: SHOP ) is showing a bullish divergence, with an RSI trending higher and falling stock price. The good news for the stock price is that, thus far, it is holding support. 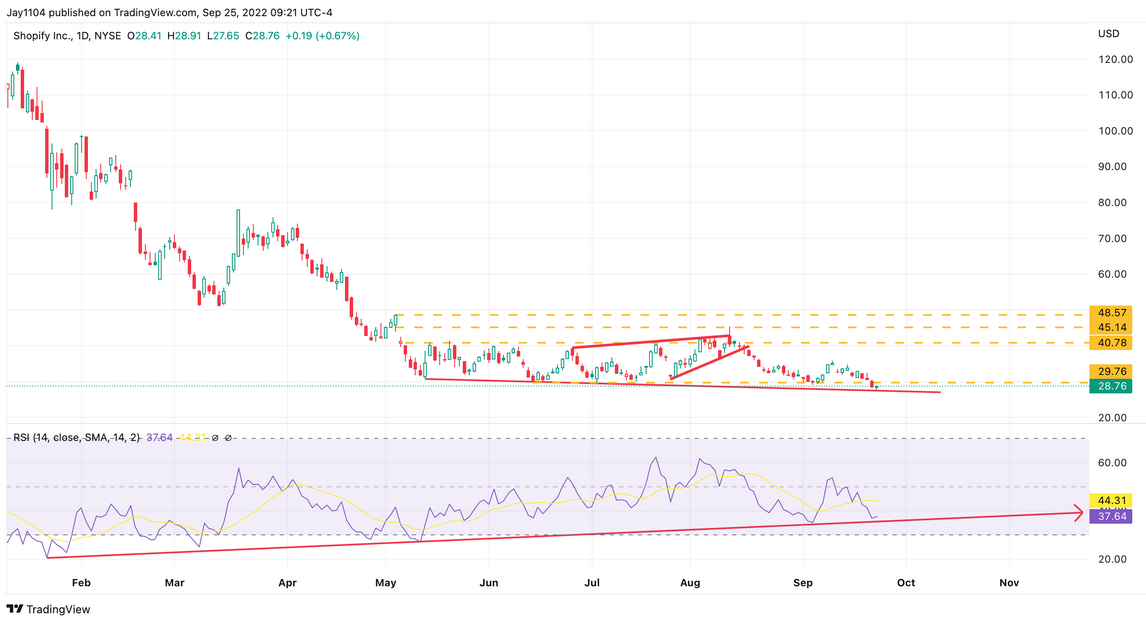 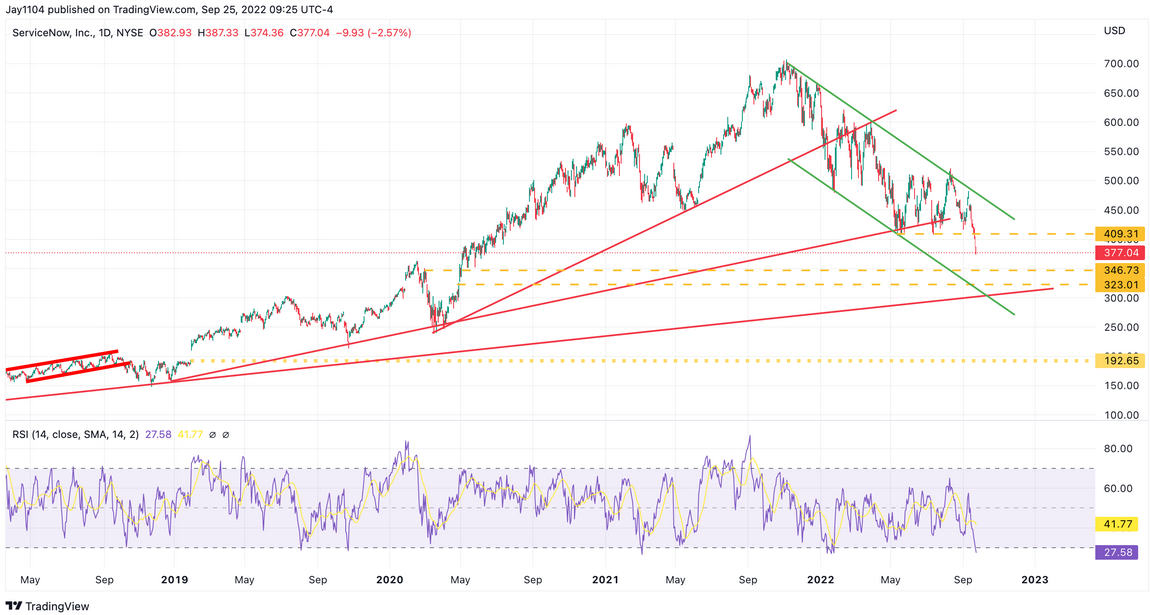 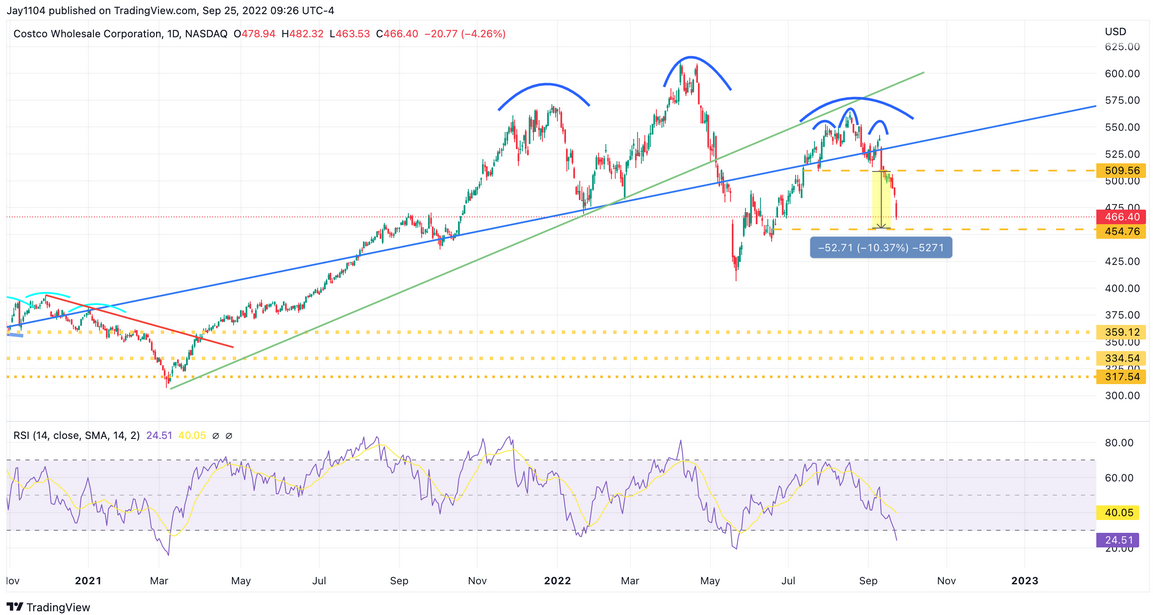 Finally, Advanced Micro Devices (NASDAQ: AMD ) is close to completing that gap fill around $62. With support at $73 broken, there is a chance it could fill that gap soon. 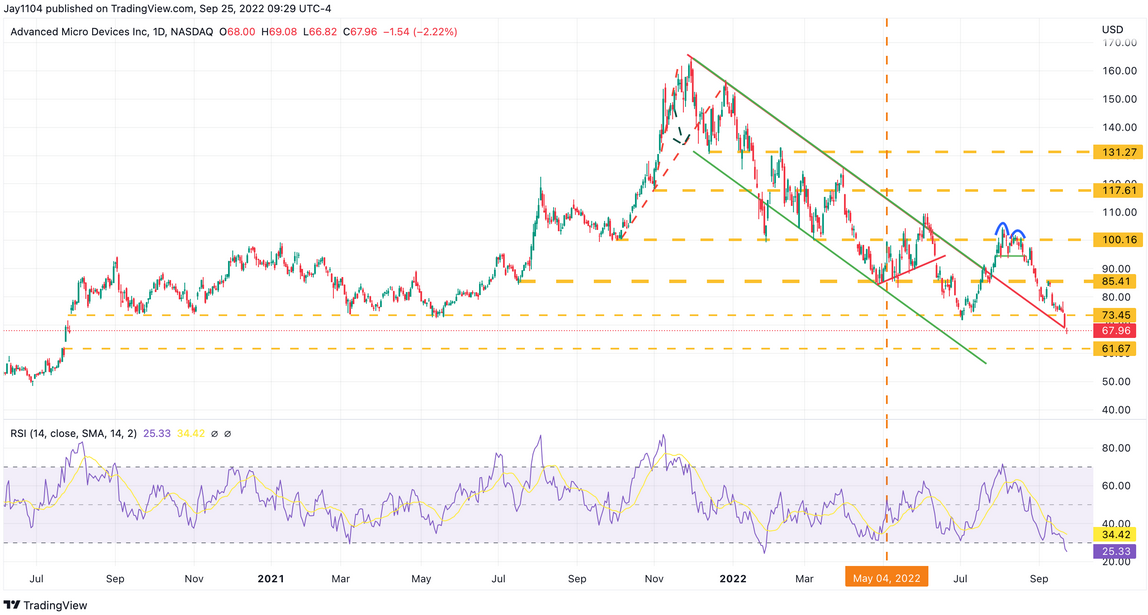