As we progress in the 2nd phase of the calendar year 2022, metals and mining stocks have struggled compared to the other evergreen sectors such as FMCG, Banking, and Financial Services. From the lows of March 2020, the Nifty Metal Index has rallied almost 280%, but the index has overall remained flat or produced single-digit returns in the last 1 year. At the beginning of the Russia-Ukraine War, the commodities had bounced back sharply. However, as recession worries started building up, commodity prices started falling, resulting in a sharp underperformance, globally. Metal stocks are still one of the best performers since covid-lows. Today, we would like to share a contrarian analysis of mining stock. While we intend to share the knowledge, it is by no means a recommendation to take a position in the company. 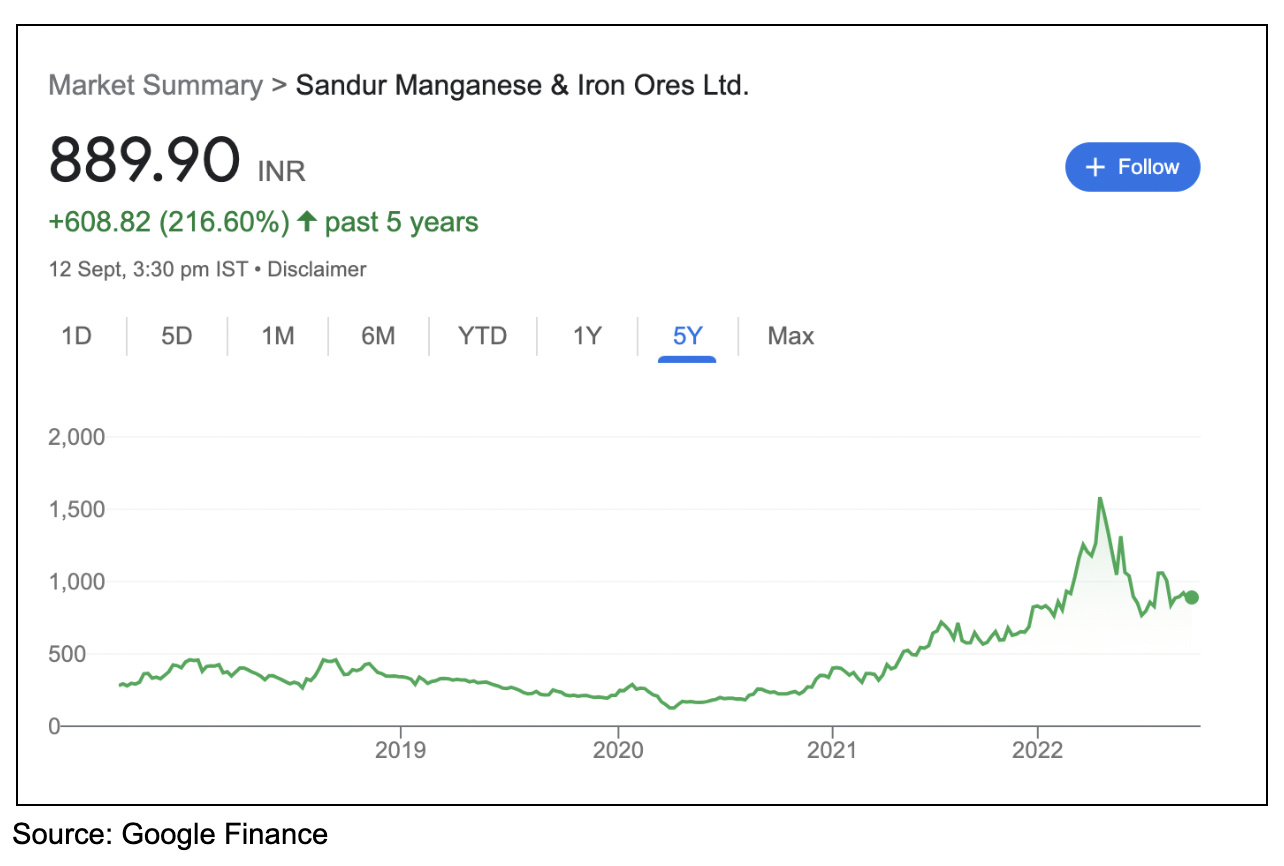 From the 1950s to date, Sandur Manganese remains to be one of the most well-governed companies in the sector that is exposed to tons of regulations on environmental and social parameters. The skillset and the strong parentage that the company possesses due to its board of directors is something worth emulating for every company.

While the company is known for mining manganese and iron ores, Sandur Manganese has gradually shifted its focus from mining to ferroalloys, coke, and energy. In fact, in FY22, the revenue share of the mining segment was only 37%, the rest coming from ferroalloys and coke. While the mining business has generated a high RoCE for the company in the past, ferroalloys, coke, and energy businesses are expected to generate sustained profitability in the coming years. Mining contributed 87% to the Profit before tax in FY21, the number has fallen to 52% in FY22 and is expected to slide further as other business segments contribute a major chunk to the profitability of the business.

The business vertical of Ferroalloys has suffered many setbacks in the past but the company has made a comeback like never before post-2007. Due to unfeasible overheads and lack of power supply, the company first ran into trouble and finally shut its operations for 7 years from 2000-2007. Since then, Sandur manganese has incurred a lot of capital expenditure to restart its operations. They did not only set up a 32MW thermal powerplant to supplement the activities of the ferroalloys division but also set up a coke oven plant to produce energy as a by-product, thus reducing the dependency on the State Electricity Board for power. In FY21, the business vertical of ferroalloys achieved a breakthrough with a turnaround in business operations. The coke oven plant and waste heat recovery boilers which were set up to produce energy paved the way for eliminating coal as a source of energy to more cleaner and sustainable forms.

There are two primary components that team Tavaga always focuses on, and we believe that these are the building blocks for a company to generate multi-bagger returns for its investors.

2. Capital expenditure from internal reserves and not through debt

While these are not the only parameters to be judged by the readers, they add a lot of value to the analysis.

The consistent growth of cash flows was one of the key drivers of the stock price of Sandur Manganese & Iron Ores Limited. The cash flows grew at a CAGR of 60% from FY17 to FY22 (Rs. 80.53 crores to Rs 873.05 crores). While the company operations are proof of this kind of growth, the performance can also be attributed to rising commodity prices post Covid-19. In the future, we expect the cash flows to normalize as commodity prices cool down.

The company has received the necessary approvals from the concerned authorities for the Phase 2 CAPEX it intends to carry out. Moreover, the current MD Mr. Bahirji Ghorpade has also mentioned the manufacturing of pellets (as reflected in the management commentary). Further, it needs to be seen whether the company finances the capital expenditure through debt or internals.

In tandem with cash flows, the profits of the company have also grown at a CAGR of more than 60% from FY17 to FY22.

The company enjoys a net-debt-free status with a cash balance of Rs. 739 crores. The long-term borrowings of Rs. 252.33 crores and finance costs of Rs. 38.43 crores in FY22 can increase if the company decides to fund its capital expenditure plans via borrowings, thus affecting profitability.

Conclusion: To invest or not to invest?

Sandur Manganese & Iron Ores Company Ltd. is a small-cap company (as per market capitalization). Small-cap stocks are volatile in nature and the most affected during turbulent times. While the past five years have been one of the best for the company, the earnings and cash flows can normalize going forward. Further, the company belongs to a sector with high government interference in terms of regulations and things can become challenging if authorities restrict companies from performing their primary operations.

That said, the stock has fallen more than 40% from its highs of Rs. 1702.52, and many risks are already priced in. But that doesn’t rule out the further deterioration of shareholder value. Team Tavaga recommends its readers consult a SEBI Registered Investment Advisor before taking any position in the stock.

Disclaimer: The above analysis is not a stock recommendation.