The power sector is currently been seen as one of the biggest bets for the next 10 years. Energy consumption has gone through the roof this year which is only expected to increase as time passes by, especially with the progress of the landscape of electric vehicles in India. A country’s energy consumption is also an indicator of its development and with still many rural parts of the country yet to get access to electricity, companies operating in the power infrastructure development, transmission, or providing specialized finance to this space have a huge scope.

Power Finance Corporation (NS: PWFC ) (PFC) which is an ISO 9001:2015 and ISO 45001:2018 certified government undertaking, coming under the administration of the Ministry of Power and is an NBFC that provides financial aid to the companies operating in the power sector. The company explores emerging opportunities in the field of e-mobility, energy storage, renewable energy equipment manufacturing, etc. The company enjoys the highest ratings (AAA) by domestic agencies - ICRA (NS: ICRA ), CRISIL (NS: CRSL ) and CARE (NS: CREI ) and has been given a Maharatna status by the government. 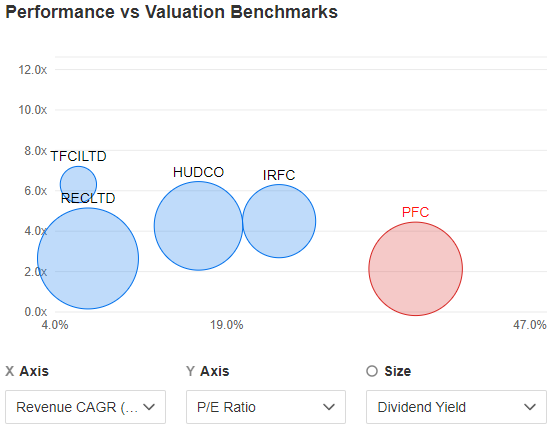 Image Description: Comparative analysis of PFC with other specialized finance companies, having P/E ratio on the Y axis, Revenue CAGR on the X axis and dividend yield determining the size of the circle.

It is a dominant player in the specialized finance sector, having a market share of over 20%. Strong asset quality, depicted by low NPAs (non-performing assets) combined with the lowest administrative cost in the industry makes this lean and professionally managed company a no-brainer for long-term investors who are bullish on the growth of the power sector in India.

Coming to the financials, it is a consistently profitable company and recorded a 6.47% YoY jump in net revenue to INR 76,344.92 crores in FY22 which is the highest ever the company recorded yet. From FY17, the company has never posted a dip in the net revenue and has grown the same at a yearly rate of 22.56% over the last 5 years.

The best part is the mouth-watering valuation at which the company is available. Its shares are trading at a P/E of just 2.13, compared to the sector’s average of 21.75, while the book value is a mere 0.31. The company is also known for dividends and it's difficult to beat the consistent payouts of PFC as it never skipped on paying dividends in the last 10 years, at least. The current yield is 10.63%, which alone beats inflation.

Disclaimer: I hold PFC shares in my portfolio. The above article is not a recommendation to buy/hold/sell any security.