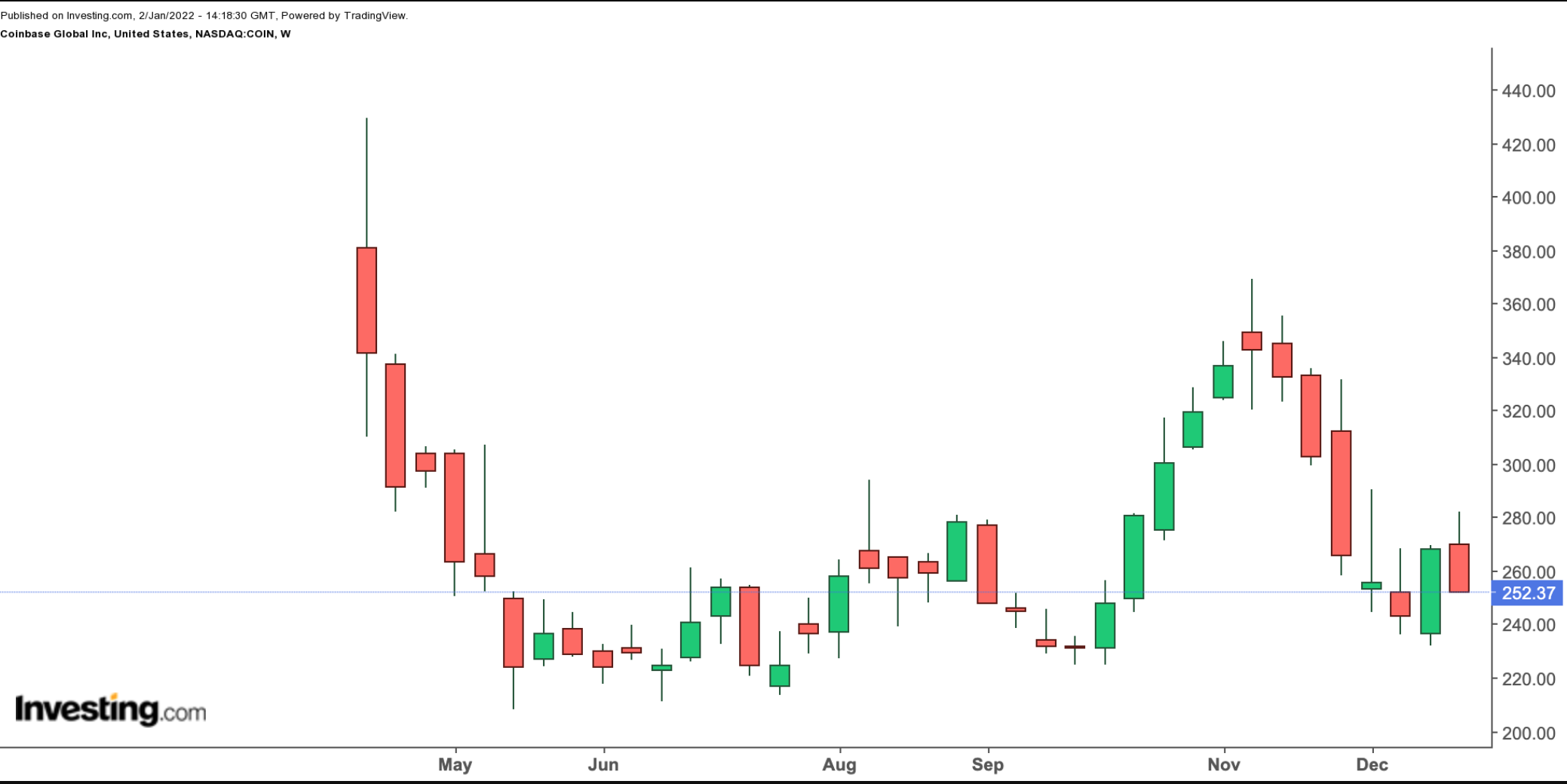 On Nov. 9, Coinbase Global issued third-quarter financials that missed analysts’ estimates. Around 90% of revenues currently come from the transaction fees from crypto trading on the platform.

In Q3, the marketplace generated $1.23 billion in net revenue as opposed to the second quarter figure of $2.03 billion. Wall Street was not impressed. Net income of $406 million translated into diluted EPS of $1.62.

“Coinbase is not a quarter-to-quarter investment, but rather a long-term investment in the growth of the cryptoeconomy and our ability to serve users through our products and services.”

What To Expect From COIN Stock

Among 22 analysts polled via Investing.com, Coinbase stock has an “outperform" rating. 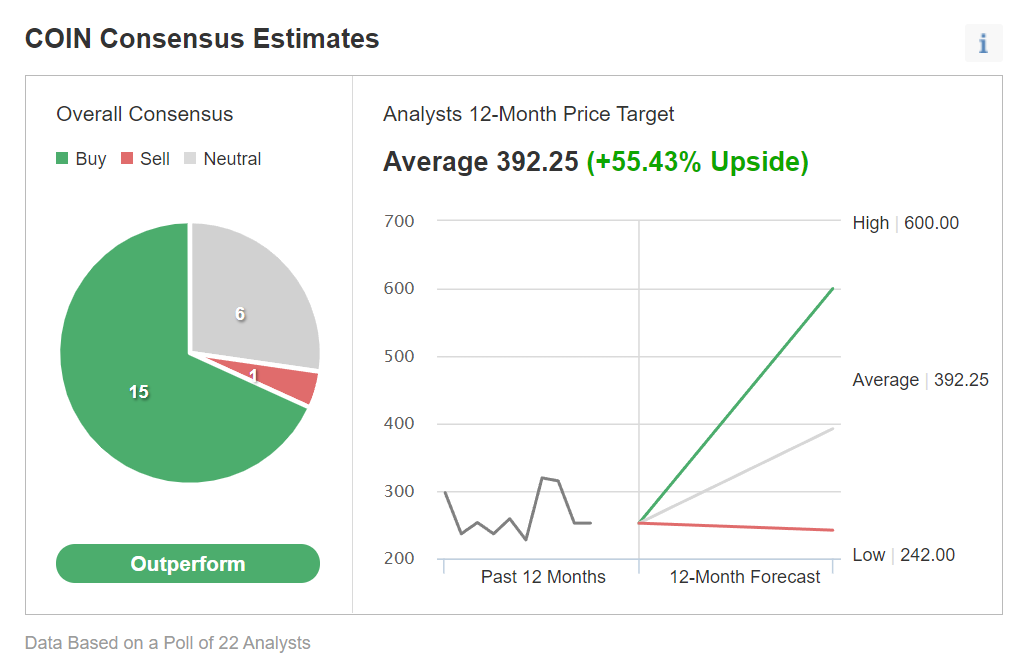 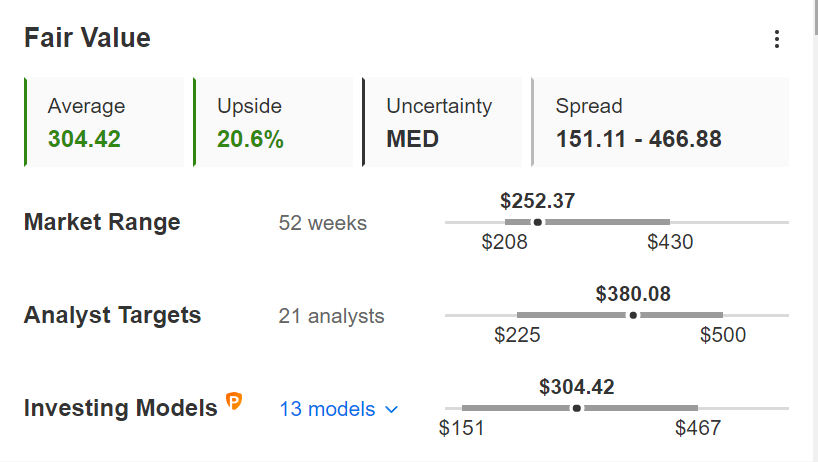 Similarly, according to a number of valuation models, like DuPont analysis or multiples (such as P/E, P/B, P/S) valuation, the average fair value for COIN stock via InvestingPro stands at $304.42, or a potential increase of about 20.5%.

Moreover, we can look at the company’s financial health determined by ranking more than 100 factors against peers in the financials sector. In terms of profit health, Coinbase Global scores 5 out of 5 (top score). And the cashflow health is at 4. Its overall performance is rated as “great.”

Readers might also be interested to know that these numbers for the fintech giant PayPal (NASDAQ: PYPL ), which enables users in certain countries to trade in a number of cryptocurrencies, are 44.9x, 10.0x, and 9.0x. Also, PYPL shares lost 19.5% in 2021.

In the coming weeks, we expect COIN stock to trade in a range, possibly between $245 and $265. Once it establishes a base, a new leg up is likely to start later in 2022.

COIN bulls with a two- to three-year horizon who are not concerned about short-term volatility could consider buying the stock around these levels for long-term portfolios. The fair value is at $304.42, and analysts' consensus expectations have set a target of $392.25.

Alternatively, investors could consider buying an exchange traded fund (ETF) that has COIN as a holding. Examples would include:

Finally, those who are experienced with options could consider an options trade. However, most option strategies are not suitable for most retail investors. Therefore, the following discussion is offered for educational purposes and not as an actual strategy to be followed by the average retail investor.

Traders who are long-term bullish on COIN shares, but believe that the short-term choppiness may persist, could put together a diagonal debit spread on COIN stock using "Long-Term Equity Anticipation Securities” (LEAPS) options.

The strategy, which is also referred to as “Poor Man's Covered Call” or “Poor Person's Covered Call,” involves options. We have covered numerous examples before using Apple (NASDAQ: AAPL ), NVIDIA (NASDAQ: NVDA ) and Taiwan Semiconductor and most recently PayPal as examples.

Buying 100 shares of Coinbase would currently cost around $25,237 based on the stock's closing price last Friday, a considerable investment for many people.

In other words, the two call options for the underlying stock (i.e., COIN in this case) have different strikes and different expiration dates. The trader goes long one option and shorts the other to make a diagonal spread.

In this LEAPS covered call strategy, both the profit potential and risk are limited. The trader establishes the position for a net debit (or cost). The net debit represents the maximum loss.

Most traders entering such a strategy would be mildly bullish on the underlying security—here, Coinbase.

Instead of buying 100 shares of Coinbase, the trader would buy a deep-in-the-money LEAPS call option where that LEAPS call acts as a surrogate for owning the COIN stock.

For the second leg of this strategy, the trader sells an out-of-the-money (OTM) short-term call, such as the COIN Feb. 18, 260-strike call option. This option’s current premium is $19.90. In other words, the option seller would receive $1,990, excluding trading commissions.

There are two expiration dates in the strategy, making it quite difficult to give an exact formula for a break-even point for the trade.

In other words, the trader wants the COIN stock price to remain as close to the strike price of the short option (i.e., $260 here) as possible at expiration (on Feb. 18), without going above it.

In our example, the maximum return, in theory, would be about $2,395 at a price of $260 at expiry, excluding trading commissions and costs. (We arrived at this number using an online calculator. However, those readers who want to see the detailed calculation of this profit potential should refer to previous examples covered.)

Understandably, if the strike price of either the long or short option had been different, the profit potential would also change.

Therefore, by not investing $25,237 initially in 100 shares of COIN, the trader’s potential return is leveraged.

Ideally, the trader hopes the short call will expire out-of-the money (worthless). Then, the trader can sell one call after the other, until the long LEAPS call expires in about two years.

Finally, we should note that a diagonal debit spread requires regular position management.

Investors who want to participate in the growth of the cryptocurrency ecosystem, but do not want to buy digital assets could regard COIN stock as a proxy.

Management is working on diversifying the revenue stream. For instance, the Coinbase Ventures segment is looking at potential startup investments. Wall Street also expects the platform to become a key player in the non-fungible tokens (NFT) space.

On a final note, in the months ahead, Coinbase Global could become a takeover candidate as well. Therefore, despite short-term volatility, we’re bullish on COIN shares in the long-run.