Shares of aviation giant Boeing (NYSE: BA ) are up 3.2% so far this year. By comparison, the Dow Jones Industrial Average is up 12.8% YTD.

There are a number of solid reasons to own the Chicago-based company's stock: it's the world’s largest aerospace and defense company, and has a market capitalization of $121 billion; After Lockheed Martin (NYSE: LMT ), it is the U.S. Defense Department’s second largest contractor.

However, recently Boeing has been struggling with production issues and a weak jetliner market. In 2018 and 2019, its commercial business took a significant hit following two fatal accidents involving its 737 MAX. And then came the pandemic, which saw the demand for air travel and, thus, commercial planes fall significantly.

Still, commercial airliners are not its primary business. Rather, three main segments contribute to Boeing’s revenues :

In commercial aviation, Netherlands-based rival Airbus Group (PA: AIR ), (OTC: EADSY ) became a major competitor in the 1990s when it launched several competing products, like the A330 and the A340. Prior to Airbus attaining similar stature to Boeing, the US company held a monopoly in the sector, though currently the two companies are considered a duopoly.

Boeing management will announce Q2 earnings on Wednesday, July 28 before market open. We expect the shares to be volatile until then. Yet, long-term investors with a two- to three-year time horizon could consider investing in BA stock between $190-$200. The stock closed yesterday at $222.54.

Air travel has been increasing since the vaccine rollout, especially within the U.S. According to metrics announced by the Transportation Security Administration, on Monday, July 19, the traveller throughput was 2,141,429. By comparison, a year ago that number was 695,330. In 2019, it had been 2,635,312.

However, international passenger demand is expected to remain weak for the rest of the year. Metrics released by the International Air Transport Association (IATA) and and Tourism Economics highlight:

At the end of April, Boeing released Q1 financials. Total revenue came in at $15.2 billion, a decline of 10% year-over-year (YoY). The breakdown for each segment was:

A net loss of $561 million meant the sixth consecutive quarterly loss for Boeing. The company lost $1.53 on an adjusted per-share basis. A year ago, the loss had been $1.70.

During the conference call, regarding the 737 program, CEO David Calhoun said:

“Since the FAA's ungrounding late last year, more than 165 countries have now approved the resumption of 737 MAX operations.”

However, we should note that China’s aviation regulator has not yet approved the MAX to return to the sky. The country is a crucial market for Boeing.

In fact, according to CNN Business, “in 2015, China was Boeing's largest export market, and it was the third largest in 2016. But the company hasn't sold any passenger planes to China in the past two years.” 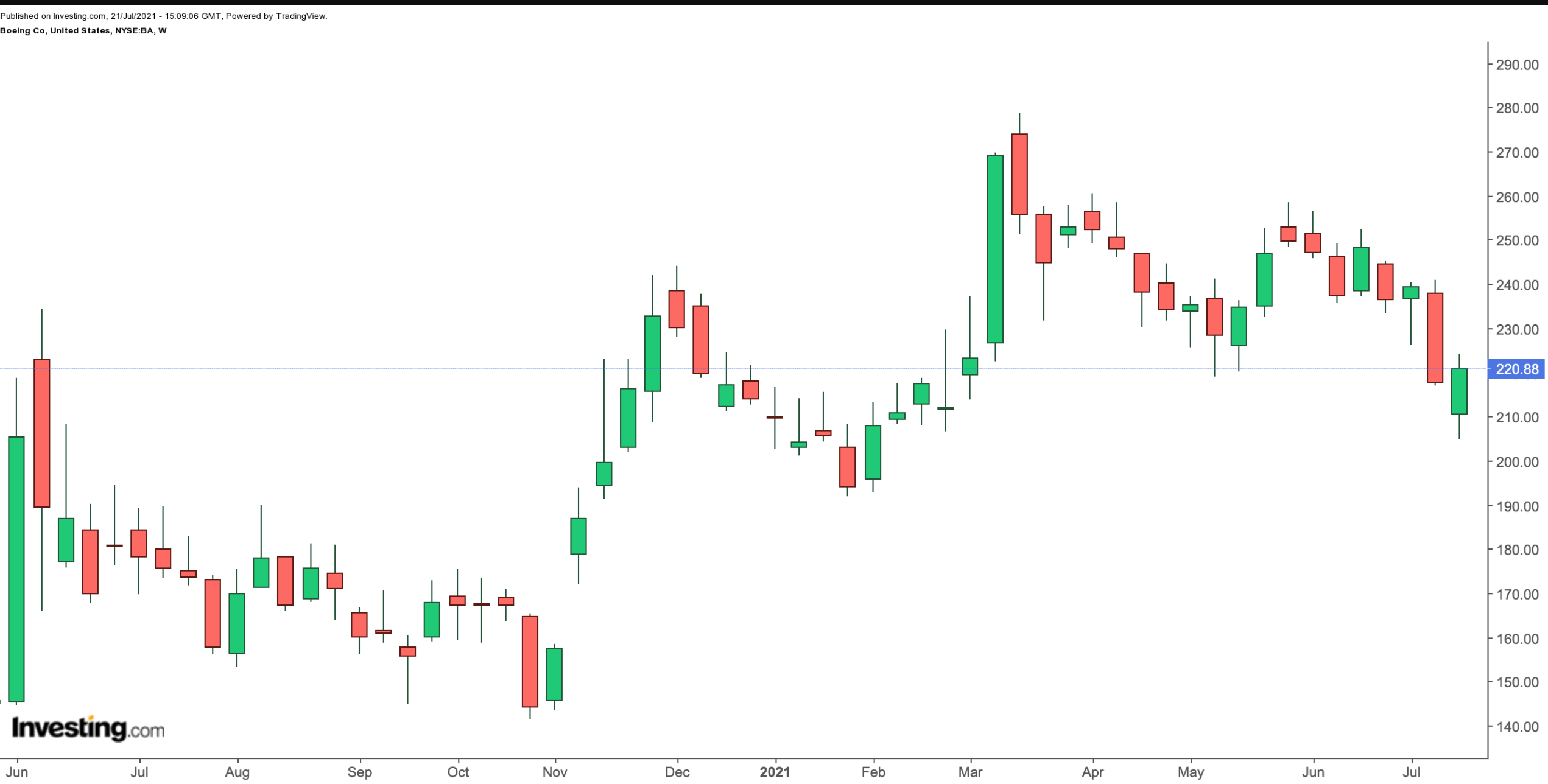 Readers who also pay attention to technical charts may want to know that according to Investing.com's technical summary a further decline toward $200, or even toward $180, is likely in the short-term. However, if history is any guide, such a decline would potentially be brief and BA stock would once again go over $200.

In the weeks following the earnings announcement, BA price is likely to move sideways, possibly between $190 and $210.

As part of the short-term sentiment analysis, it would be important to look at the implied volatility levels for BA options. Implied volatility typically shows traders the market's opinion of potential moves in a security, but it does not forecast the direction of the move.

Boeing’s current implied volatility (IV) is 33.7, which is lower than the 20-day moving average of 35.9. In other words, implied volatility is trending lower. Although such metrics could change rapidly, we expect any potential large swing in the BA share price to be short lived. 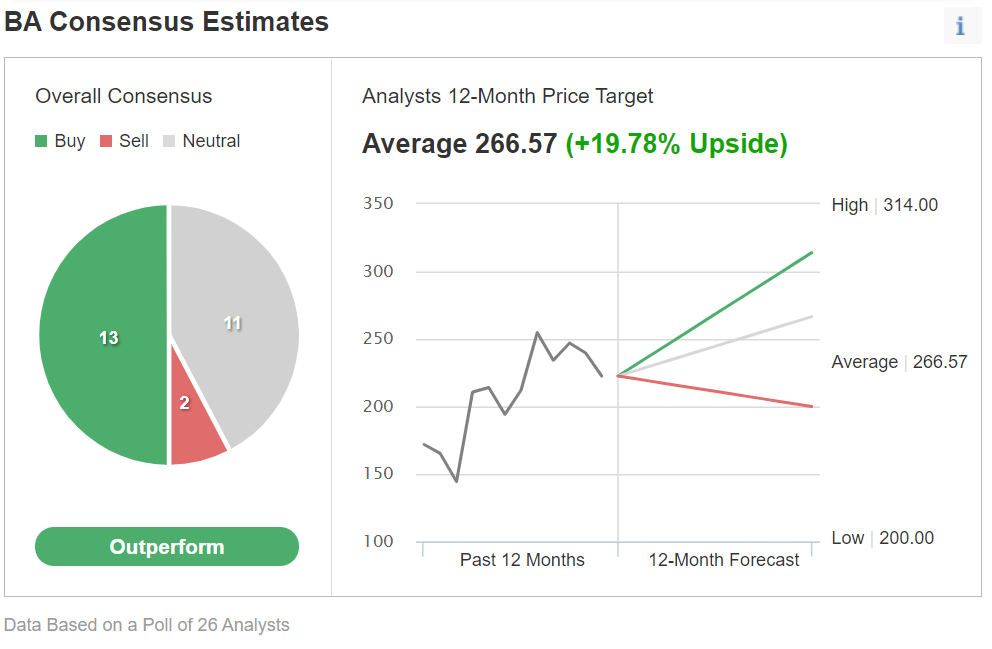 Nonetheless, the longer-term outlook for BA stock looks better. According to a poll of 26 analysts by Investing.com, 13 believe the share price will ‘outperform.’ With an average 12-month price target of $266.57, such a move would represent a return of close to 21%.

Although BA stock will likely recover in the long-run to reach new record highs, July could still prove a bit early to become overly optimistic.

Readers who are of the opinion that Boeing could recover from its current woes may want to add BA stock to their long-term portfolios.

Depending on individual portfolio allocations and risk/return profiles, here are three types of trades. These trades are based on BA stock’s intraday price of $220.93 on July 21. Please note that calculations below do not include trading costs or taxes.

Investors who are not concerned with daily moves in price could consider investing in BA stock now. They should expect to hold this long position for several months (or even more than a year) while BA stock potentially makes another attempt at the 52-week high of $278.57 hit in March.

Investors could also consider placing a stop loss at about 3% below their entry point in BA stock.

2. Buy A LEAPS Option As A Surrogate For Owning BA Stock:

For many investors who are bullish on Boeing, this amount would be a sizeable investment. Instead, they could consider buying a LEAPS call with a delta of 0.80, such as the BA Jan. 20, 2023, 160-strike call option. This option is currently offered at $75.75. In other words, investors would need to pay a premium of $7,575 to buy this LEAPS call option.

We covered the mechanics and the risk/return profile of LEAPS here. But in simple terms, the delta rating shows the amount an option’s price is expected to move based on a $1 change in the underlying security.

The maximum return on the upside would be uncapped, depending on where BA stock trades on the day the investor closes the position.

Investors should remember that although the expiry is in January 2023, this long-term option still expires. As the expiration date approaches, an option loses value at an accelerating rate. If Boeing stock were to tank and close below $160 in January 2023, the maximum loss would be $7,575. Therefore, trade management will be important.

Our third trade involves a cash-secured put strategy. We have recently covered this option in numerous articles. Here is one example.

Assuming traders would enter this put selling strategy at the current price, the upside is keeping this premium of $927 as long as BA stock closes above $215, when the option expires. A total of $927 would be the maximum return for this trade.

The downside is if Boeing stock trades below $215.00 ahead of expiration. Should that occur, traders could be assigned 100 shares for each sold put at a cost of $215.00 per share.

In April, Q1 results showed Boeing stock still had a considerable way to go to recover from the company's recent woes. Therefore, Q2 metrics, which will be announced next week, will get significant investor attention.

However, Boeing is a major name in the global economy. Therefore, we expect Boeing to eventually recover to reach new highs. But that move will likely take several quarters.