Shares of the streaming entertainment pioneer Netflix (NASDAQ: NFLX ) are down more than 41.3% year-to-date, and around 32.5% in the past 12 months. In comparison, since January, the Dow Jones U.S. Media Index and the Roundhill Streaming Services & Technology ETF (NYSE: SUBZ ) have declined 11.6% and 24.8%, respectively. 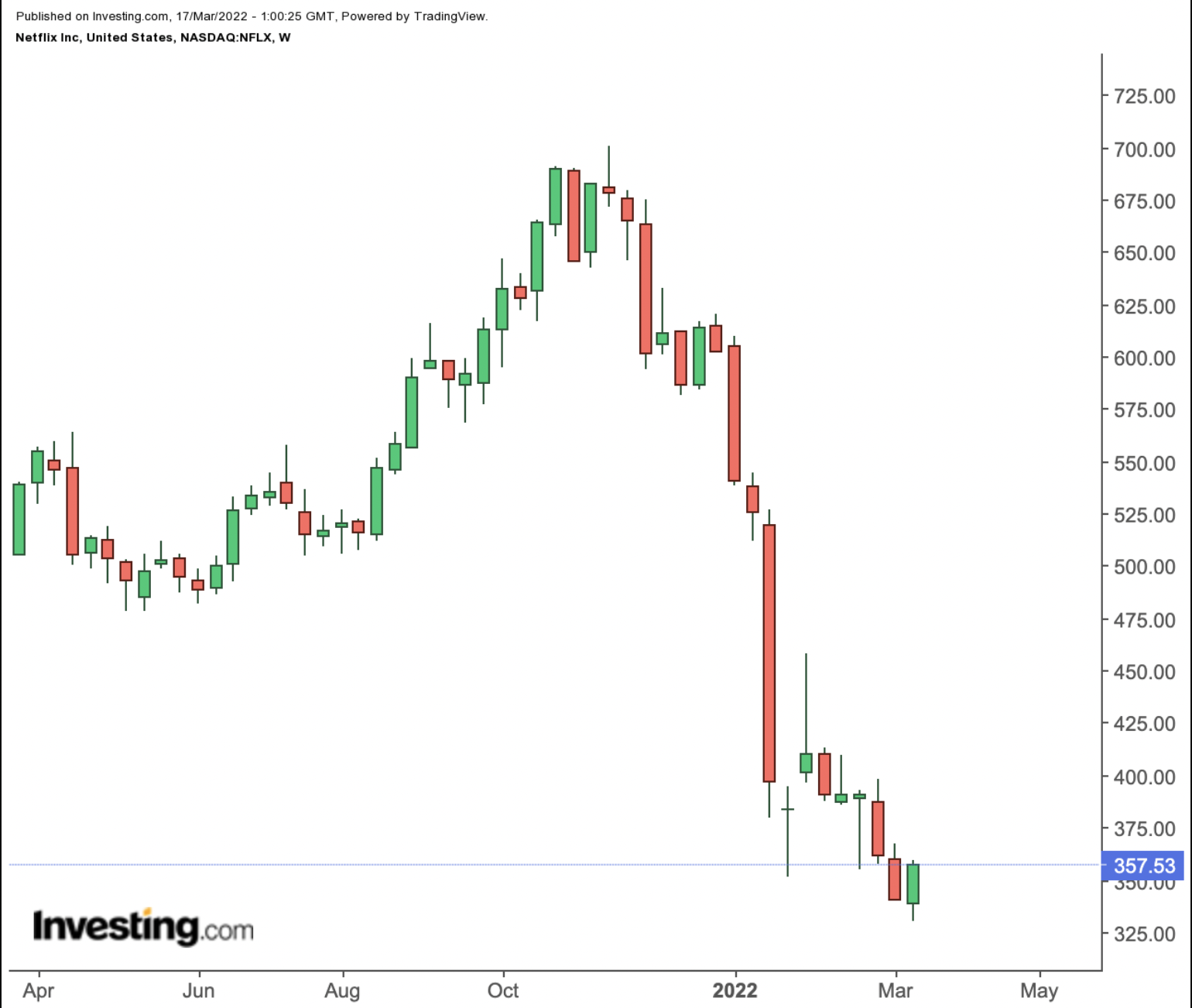 In its letter to shareholders, NFLX management stated:

“Full year revenue of $30 billion grew 19% year over year while operating income of $6.2 billion rose 35% year over year. Overall in 2021, Netflix series accounted for six out of the 10 most searched shows globally, while our films represented two of the top 10.”

The company expects to achieve 2.5 million global streaming paid net additions in Q1 2022. While revenue is forecast to hit $7.9 billion, diluted EPS guidance was given as $2.86.

Prior to the release of the Q4 results, Netflix stock was around $510. But as of Wednesday's close, the share price was $357.53. This means NFLX shares have lost more than 30% since the January earnings announcement.

What To Expect From Netflix Stock

Among 43 analysts polled via Investing.com, NFLX stock has an "outperform" rating. 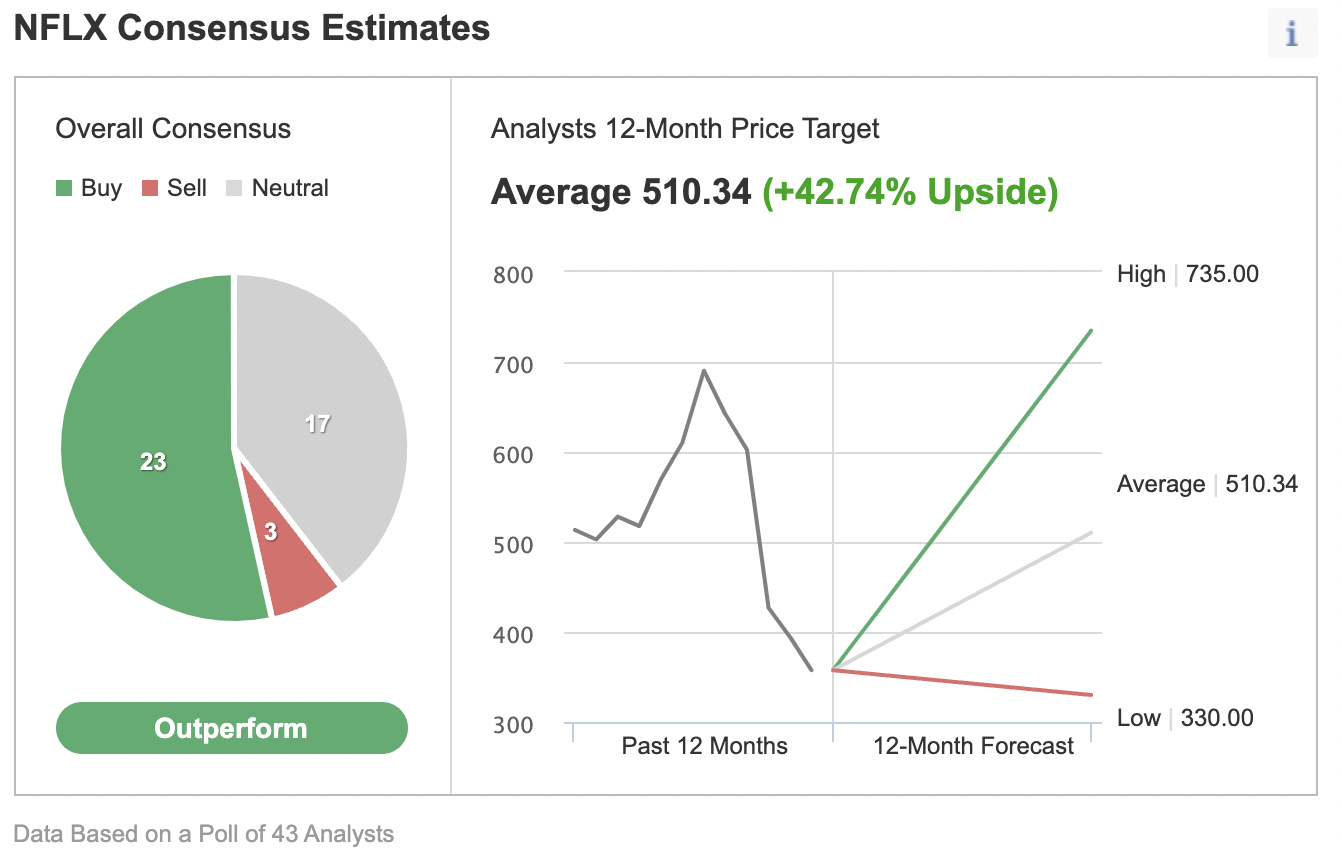 Wall Street also has a 12-month median price target of $510.34 for the stock, implying an increase of more than 45% from current levels. The 12-month price range currently stands between $330 and $735.

Similarly, according to a number of valuation models, like those that might consider P/E or P/S multiples or terminal values, the average fair value for Netflix stock at InvestingPro stands at $504.21. 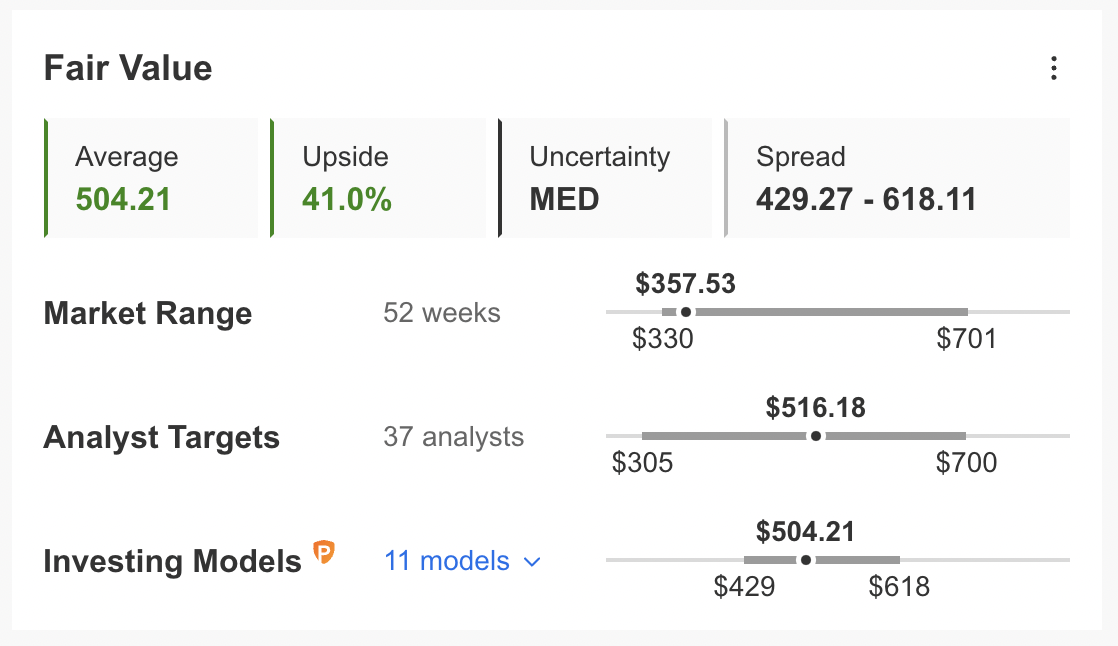 In other words, fundamental valuation suggests shares could increase about 41%.

We can also look at Netflix’s financial health as determined by ranking more than 100 factors against peers in the communication services sector.

For instance, in terms of growth and profit, it scores 4 out of 5. Its overall score of 3 points is a good performance ranking.

At present, NFLX’s trailing P/E, P/B and P/S ratios are 30.6x, 9.9x and 5.3x respectively. Comparable metrics for peers stand at 3.7x, 3.2x and 4.8x respectively. These numbers show that despite the recent decline in price, the fundamental valuation for NFLX stock is still on the rich side.

Our expectation is for Netflix stock to build a base between $340 and $360 in the coming weeks. Afterwards, shares could potentially start a new leg higher.

Netflix bulls who are not concerned about short-term volatility could consider investing now. Their target price would be $504.21, as suggested by fundamental valuation models.

Alternatively, investors could consider buying an exchange-traded fund (ETF) that has NFLX stock as a holding. Examples include:

Finally, investors who expect Netflix stock to bounce back in the weeks ahead could consider setting up a bull call spread.

Most option strategies are not suitable for all retail investors. Therefore, the following discussion on NFLX stock is offered for educational purposes and not as an actual strategy to be followed by the average retail investor.

The trader wants NFLX stock to increase in price. In a bull call spread, both the potential profit and the potential loss levels are limited. The trade is established for a net cost (or net debit), which represents the maximum loss.

Buying this call spread costs the investor around $4.40, or $440 per contract, which is also the maximum risk for this trade.

We should note that the trader could easily lose this amount if the position is held to expiry and both legs expire worthless, i.e., if the NFLX stock price at expiration is below the strike price of the long call (or $360 in our example).

The trader will realize this maximum profit if the Netflix stock price is at or above the strike price of the short call (higher strike) at expiration (or $370 in our example).

In recent months, Netflix stock has come under significant pressure. Yet, the decline has improved the margin of safety for buy-and-hold investors who could consider investing in the streaming giant soon. Alternatively, experienced traders could also set up an options trade to benefit from a potential run-up in the price of NFLX stock.