Just after President Joe Biden's January 2021 inauguration, I discussed some of the potential energy policies that his administration might enact and what impact they could have on the oil market. 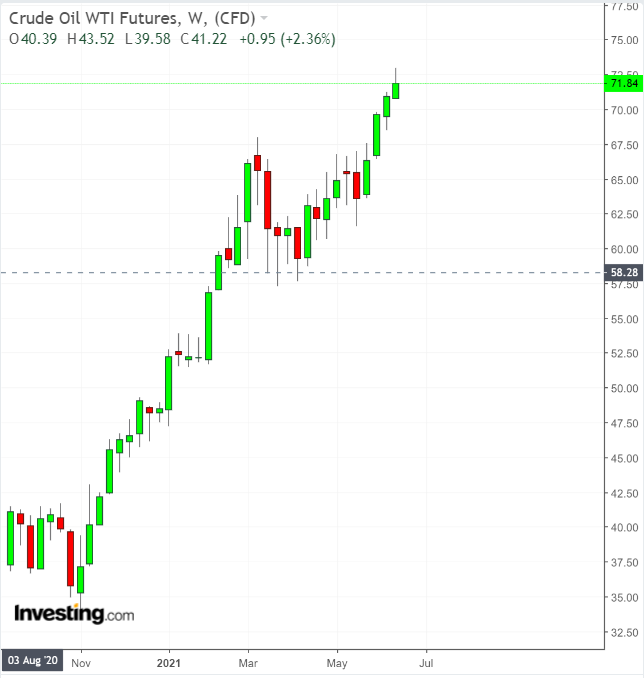 Six months later, with the price of Brent rapidly approaching $75 per barrel and WTI nearing $73 per barrel (the highest price since October 2018), now is a good time to assess the extent to which Biden’s triumvirate of policies are influencing the oil market, and what we can expect in the future.

On the day after the inauguration, the Biden administration revoked the permit for the Keystone XL pipeline. Work on the pipeline stopped immediately, resulting in the layoffs of hundreds of contractors.

Initially, there was talk that the province of Alberta and TC Energy (NYSE: TRP ), the company building the pipeline, might seek damages from the Biden administration.

In March, 21 states filed a lawsuit against the Biden administration over the cancellation. However, TC Energy recently announced that it was cancelling the project for good, so any legal action may be moot.

At the time, no impact was evident on oil prices, perhaps due to the fact that the pipeline had not yet been built. However, oil and gasoline prices could be impacted, if the Biden administration tries to shut down existing domestic pipelines. As we saw last month, a brief disruption of the Colonial Pipeline caused gasoline prices to soar in many states in the eastern United States and caused gasoline and diesel shortages.

The Minnesota Court of Appeals recently upheld a ruling that would allow Canadian pipeline company Enbridge (NYSE: ENB ) to expand its Line 3 pipeline that carries oil from Alberta to Wisconsin. The pipeline is being expanded to be able to move 760,000 bpd of oil and should be complete by the fourth quarter of 2021.

Similarly, a federal judge granted permission for the Dakota Access Pipeline to continue to operate during another environmental review, which is expected to take until March 2022 to complete.

The price of oil would have been expected to rise had these two court cases gone against the respective pipeline companies.

It is possible that we could see more aggressive anti-pipeline policies from the Biden administration, especially if his team feels it needs to further appease the radical, anti-fossil fuel element of the Democrat Party. Right now, cancelling the Keystone XL pipeline appears to be enough.

2. Moratorium on new oil and gas leases on federal lands and waters

Another relatively quick move by the Biden administration after taking office was to suspend the issuance of new oil and gas drilling permits on federal land. This was decided pending a review of the permitting process.

Half a year later, and the government has yet to issue new guidelines on permitting. At the time it was first announced, this move was not an immediate market-mover. Oil prices were still low, and many drillers already had permits stacked up.

Since then, however, it has become clear that this decision is actually pushing oil prices up, because it has impacted on U.S. oil companies’ willingness to drill new wells.

According to a survey of domestic oil companies conducted by the Federal Reserve Bank of Dallas, 58% of executives reported concern that “increased federal regulation will make their business unprofitable.” This has made them hesitant to invest in drilling new wells.

And as a result, oil prices have been pushed higher. Also adding tailwinds to price escalation is higher oil demand and OPEC+’s decision to keep oil production quotas in place.

Earlier this week, a federal judge in Louisiana issued a preliminary injunction to stop the Biden administration’s moratorium on issuing new oil and gas leases. In response to a lawsuit filed by 13 states, the judge said that Biden does not have the legal authority to halt leasing federal lands for oil and gas drilling without Congressional approval.

But traders should not read this as a victory for oil companies. In fact, it is unlikely that drilling will increase based on this ruling.

Oil companies are unsure about the future. Instead, it further complicates the regulatory atmosphere for oil companies and creates more instability.

Companies are generally unwilling to invest in expanding operations when facing regulatory uncertainty. Do not expect oil prices to decline based on this ruling.

Back in January, the Biden administration directed the EPA to propose a rule that would suspend, revise or rescind the Trump administration’s rollback of Obama’s methane rule. This rule required companies to monitor upstream and midstream operations for methane leaks.

The new rule is expected to be ready by September, but it isn’t clear whether it will simply reinstate that of Obama’s, or if it will propose more stringent regulations.

If it simply reverts to the Obama-era rule, most major oil and gas companies will not be impacted because they have already adjusted their practices to conform. However, smaller oil companies would feel the brunt because they would be forced to invest in expensive monitoring systems.

Reversion to the previous rule would be unlikely to impact oil and gas supplies at this point, since last year’s oil price downturn helped clean out the industry of weaker and insolvent companies.

However, a methane rule that is more stringent than Obama’s could impact all companies. As a result, a more hardline rule could impact future investment in new drilling, thus constraining future supply from the U.S. and pushing oil prices higher.

But Biden’s policies are playing a role in keeping oil production in the U.S. from growing, which is likely to be more impactful over months, not days.

Regulatory uncertainty makes companies hesitant to invest in new drilling or new infrastructure, and this has real implications for oil prices.