Traders have seen signs of economic hope as many stocks and indices made a Q4 comeback after a year of bearish disappointment. But is the recent optimism just an economic end-of-life rally, or will 2023 be the year of the bull?

If a recession is on the horizon, the first place to feel it, as always, will be the stock market. And what better way to measure the performance of the stock market than to cast our investigative eye on the S&P 500? Currently, the S&P 500 is playing around the $4063 (USD) mark, but where is it going?

The Financial Stability Board (FSB) is an international body that includes all G20 major economies, working alongside the International Monetary Fund (IMF), World Bank, and the World Trade Organization.

The entities listed below are considered to be systemically important by the FSB. All forecast statements below were made using Earnings Per Share (EPS) as the primary indicator. 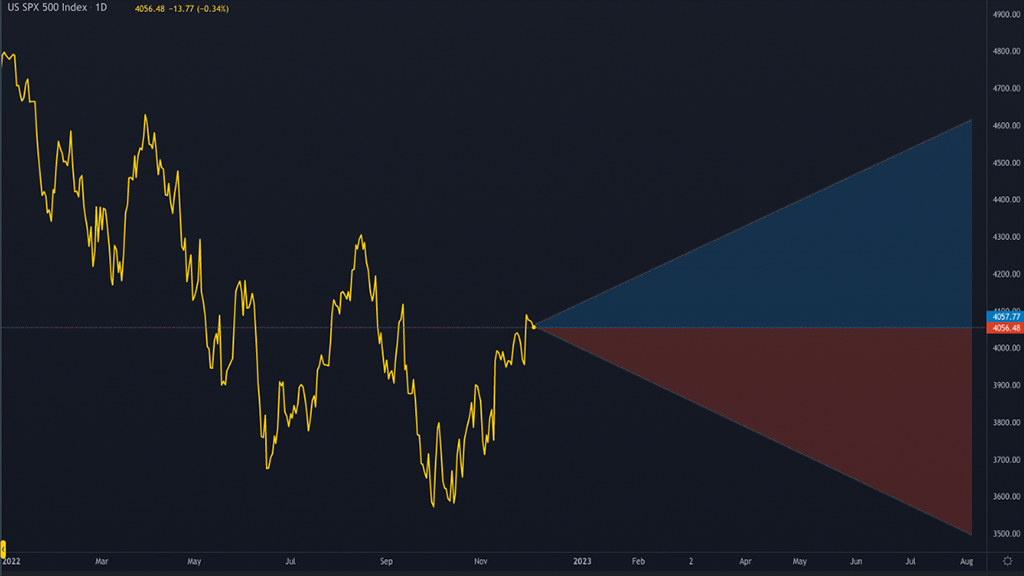 So, let’s see what the big banks predict. Will S&P500 go up or down, and at what price will it settle? If you’re not familiar with “financial lingo”, the bottom line will give you some perspective and a big-picture understanding of what the banks agree on.

According to BofA, $200 EPS
“But there are a lot of variabilities here. Our bull case, $4600, is based on our Sell Side Indicator being as close to a ‘Buy’ signal as it was in prior market bottoms - Our bear case from stressing our signals yields $3000.“

Barclays is a British multinational bank, headquartered in London. Barclays has a primary listing on the London Stock Exchange and is a constituent of the FTSE 100 Index .

According to Barclays, $210 EPS
“We acknowledge some upside risks to our scenario analysis, given post-peak inflation, strong consumer balance sheets, and a resilient labor market. However, current multiples are baking in a sharp moderation in inflation and ultimately a soft landing, which we continue to believe is a low probability event.“

BMO is a Canadian multinational investment bank and financial services company. It is the fourth-largest bank in Canada by market capitalization and assets, the eighth-largest bank in North America, and in the top 50 in the world.

According to BMO, $220 EPS
“We still expect a December S&P 500 rally even if stocks do not hit our 4,300 2022 year-end target. Unfortunately, we believe it will be difficult for stocks to finish 2023 much higher than current and anticipated levels, given the ongoing tug of war between Fed messaging and market expectations.“

Citigroup Inc (NYSE: C ). is an American multinational investment bank and financial services corporation headquartered in New York City. Citigroup is the third largest banking institution in the United States and one of the largest securities services providers with over $23.6 trillion in assets.

According to Citi, $215 EPS
“Implicit in our view is that multiples tend to expand coming out of recessions as EPS in the denominator continues to fall, while the market begins pricing in recovery on the other side. Part of this multiple expansion, however, has a rates connection. The monetary policy impulse to lower rates lifts multiples as the economy works its way out of the depths of the recession.“

According to Credit Suisse $230 EPS
“2023: A year of weak, non-recessionary growth and falling inflation.”

Deutsche Bank is a multinational investment bank and financial services company headquartered in Frankfurt. Deutsche Bank is the largest German banking institution and the 21st largest bank in the world.

According to Goldman Sachs, $224 EPS
“The performance of US stocks in 2022 was all about a painful valuation de-rating, but the equity story for 2023 will be about the lack of EPS growth. Zero earnings growth will match zero appreciation in the S&P 500.“

HSBC Holdings (LON: HSBA ) PLC is a British multinational bank and financial services holding company. It is the largest bank in Europe by total assets, valued at over $2.9 trillion.

According to HSBC $225 EPS
“We think valuation headwinds will persist well into 2023, and most downside in the coming months will come from slowing profitability.“

JPMorgan Chase (NYSE: JPM ) & Co. is an American multinational investment bank and financial services holding company headquartered in New York City. JPMorgan is the largest bank in the United States, the world's largest bank by market capitalization, and the fifth-largest bank in the world in terms of assets, totaling $3.774 trillion.

According to JPMorgan, $205
“We expect market volatility to remain elevated (VIX averaging ~25) with another round of declines in equities, especially after the run-up into year-end that we have been calling for and the S&P 500 multiple approaching 20x. More precisely, in 1H23 we expect S&P 500 to re-test this year’s lows as the Fed overtightens into weaker fundamentals. This sell-off combined with disinflation, rising unemployment, and declining corporate sentiment should be enough for the Fed to start signaling a pivot, subsequently driving an asset recovery, and pushing S&P 500 to 4,200 by year-end 2023.“

According to Morgan Stanly, $195 EPS
“195 leaves us 16% below consensus on '23 EPS in our base case, and down 11% from a year-over-year growth standpoint. After what's left of this current tactical rally, we see the S&P 500 discounting the '23 earnings risk sometime in Q123 via a ~3,000-3,300 price trough. We think this occurs in advance of the eventual trough in EPS, which is typical for earnings recessions.“

According to Societe Generale
“Bearish but not as bearish as 2022, as the returns profile should be much better in 2023 as Fed hiking nears an end for this cycle. Our ‘hard soft-landing scenario sees EPS growth rebounding to 0% in 2023. We expect the index to trade in a wide range as we see negative profit growth in 1H23, a Fed pivot in June 2023, China re-opening in 3Q23, and a US recession in 1Q24.”

UBS is a multinational investment bank and financial services company based in Zürich. It is the largest Swiss banking institution, the third-largest bank in Europe, and the largest private bank in the world.

According to UBS, $198 EPS
“With UBS economists forecasting a US recession for Q2-Q4 2023, the setup for 2023 is essentially a race between easing inflation and financial conditions versus the coming hit to growth+earnings. History shows that growth and earnings continue to deteriorate into market troughs before financial conditions ease materially.“

Formerly the Russian Commercial Bank (RCB), RosBiznesConsulting is an international bank headquartered in Cyprus. Categorized as a significant European Union bank under the direct supervision of the European Central Bank through the Single Supervisory Mechanism.

According to RBC, $199 EPS
“We think the path to 4,100 is likely to be a choppy one in 2023, with a potential retest of the October lows early in the year as earnings forecasts are cut, Fed policy gets closer to a transition (stocks tend to fall ahead of final cuts), and investors digest the onset of a challenging economy.“

According to JPMorgan, $205
“We expect market volatility to remain elevated (VIX averaging ~25) with another round of declines in equities, especially after the run-up into year-end that we have been calling for and the S&P 500 multiple approaching 20x. More precisely, in 1H23 we expect S&P 500 to re-test this year’s lows as the Fed overtightens into weaker fundamentals. This sell-off combined with disinflation, rising unemployment, and declining corporate sentiment should be enough for the Fed to start signaling a pivot, subsequently driving an asset recovery, and pushing S&P 500 to 4,200 by year-end 2023.“

Wells Fargo & Company is an American multinational financial services company with corporate headquarters in San Francisco. It is the fourth-largest bank in the United States by total assets

According to Wells Fargo

“Our single and consistent message since early 2022 has been to play defense in portfolios, which practically means making patience and quality the daily watchwords. Holding tightly to those words implies that long-term investors, in particular, can use patience to turn time potentially to an advantage. As we await an eventual economic recovery, the long-term investor can use available cash to add incrementally and in a disciplined way to the portfolio.”

Collectively some very confusing and perhaps unclear statements from the big banks. But one general theme that the majority of companies agree on is that the US economy will go into recession in 2023, and the world will likely follow.

The silver lining here is that the dips in the S&P 500 forecasts are not as dramatic as perhaps many traders expected. The most bearish recessionary forecasts are still higher than in September 2022. They also expect a drop in inflation, which could give the Federal Reserve a green light to ease their hawkish stance.

The biggest banks in the world don’t plan on losing much money this time around, which means we might be looking at a micro recession rather than a full-blown crash. Good news for everyone if that follows true.

As for trading the S&P 500, expect plenty of short-range volatility in the coming months with no major long-term rallies or crashes. Use every available volatility protection at your disposal and adjust your leverage for a bumpy ride in 2023 Q1 and Q2.