If you’re looking to build an income portfolio that generates steady income over the long run, buying reliable stocks that consistently raise their dividends is the way to go.

The best time to make that move is when asset prices are low, and dividend yields are higher. After a consistent downturn this year, I see such opportunities emerging in different market sectors.

In search of quality dividend stocks that still offer a reasonable yield to beat inflation, which is running close to a four-decade high, I scanned the income space north of the border and came up with the following two stocks. Let’s take a deeper look:

Canadian banks are among the best dividend-paying stocks in North America. The nation’s top six lenders generally distribute between 40-50% of their income in dividends yearly, helped by solid franchises that generate consistent revenue.

One way to maximize your return on this trade is to look for a banking stock under selling pressure due to temporary or cyclical reasons. The logic behind this trade is that Canadian banking stocks operate in a solid and well-protected regulatory environment; thus, there is little risk of systemic failure. No Canadian bank sought a government bailout even during the 2008 Financial Crisis.

Based on this logic, Bank of Nova Scotia (NYSE: BNS ), Canada’s third-largest bank, is currently offering the highest yield, close to 6%, among the top six banks, and it could be a good addition to any long-term income portfolio. 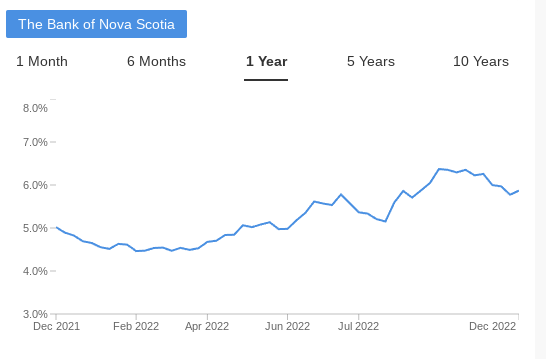 BNS shares have fallen 22% this year, compared with a 7.6% decline for the S&P/TSX Commercial Banks Index, on concerns that the lender is more exposed to economic headwinds than its peers due to its vast presence in Latin America. Canada’s falling real estate market is also a factor, given the lender’s huge mortgage portfolio.

Despite these risks, there is little chance that the bank’s payouts are in danger. While lending to real estate slowed considerably this year, Scotiabank is benefiting from strong loan demand from corporate clients.

In its fourth-quarter earnings report, Scotia reported a 25% jump in business loans compared to the same period a year ago. The Latin America-focused international division also posted higher revenue and profit, helped by a 15% increase in business loans as well as widening lending margins.

In addition, BNS has a solid track record when it comes to rewarding investors. Growth in the bank’s earnings has resulted in dividend increases in 43 of the last 45 years – one of the most consistent records for dividend growth among major Canadian corporations. BNS has been paying dividends since 1833.

Canadian Natural Resources (NYSE: CNQ ) is another strong name to benefit from the country’s strength in energy markets. The Calgary-based company has a diversified portfolio of assets in North America, the U.K. North Sea, and Offshore Africa.

Its position as Canada’s largest oil and natural gas producer has allowed it to provide more than two decades of hefty paying dividends. 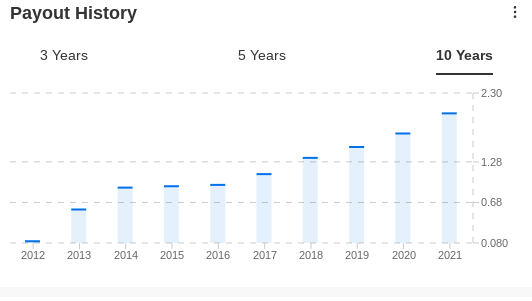 Canadian Natural is in a strong growth mode, aiming to raise its output to as high as 1 million barrels a day in 2023 for the first time. Combined with natural gas, production is forecast to increase by 56,000 barrels of oil-equivalent a day from this year to as much as 1.4 million barrels, the company said in an investor presentation Wednesday.

Investors who owned CNQ stock have benefitted from the company’s massive hike in its payout this year. It gave a 28% raise this spring and another 13% increase this month. In addition, investors received a bonus dividend of C$1.50 per share in August.

Canadian Natural’s growing and sustainable dividend is a testament to its balance sheet strength and diverse asset base. In its latest earnings report yesterday, the company expects total 2023 production to be 4% higher than this year, and it expects to return more money to shareholders.

Currently, CNQ is allocating 50% of free cash flow to share buybacks to raise shareholder returns to 80%-100% once the net debt is reduced to C$8 billion. Canadian Natural will likely reach an C$8 billion net debt target in the fourth quarter next year, TD Securities analyst Menno Hulshof said in a note.

Disclaimer: As of this writing, the author owns Bank of Nova Scotia shares. The views expressed in this article are solely the author’s opinion and should not be taken as investment advice.