Stocks on Wall Street roared back from a sharp selloff on Friday, but the major averages ended a volatile week on a mixed note, as investors continued to weigh the impact of a furious rally in bonds.

The blue-chip Dow Jones Industrial Average posted a weekly gain of 1.8%, while the S&P 500 inched up 0.8%. The NASDAQ Composite underperformed however, with the tech-heavy index falling more than 2% over the same timeframe.

Between another batch of high-profile earnings reports and more important economic data, the week ahead is expected to be another busy one on Wall Street.

Regardless of which direction the market goes, below we highlight one stock likely to be in demand and another which could see further downside.

Remember though, our timeframe is just for the upcoming week.

Roblox, which operates a wildly popular online platform that allows users to easily play and develop videogames, is expected to make headlines this week when it makes its long-awaited debut on the New York Stock Exchange on Wednesday, Mar. 10.

After delaying plans to go public last month, the San Mateo, California-based digital entertainment platform, which was founded in 2004, will hold a direct-listing of its shares, joining a roster of notable companies to go public through the same route, including Palantir (NYSE: PLTR ), Slack (NYSE: WORK ), and Spotify (NYSE: SPOT ).

In total, the company, which will trade under the ticker symbol ‘RBLX’, plans to issue 198.9 million shares.

While it has not specified a pre-listing price range, Roblox sold nearly 12 million shares of convertible preferred stock in a private placement at $45 a share in January. A listing at that price would value the company at around $29.5 billion, up from a valuation of just $4 billion a year ago. 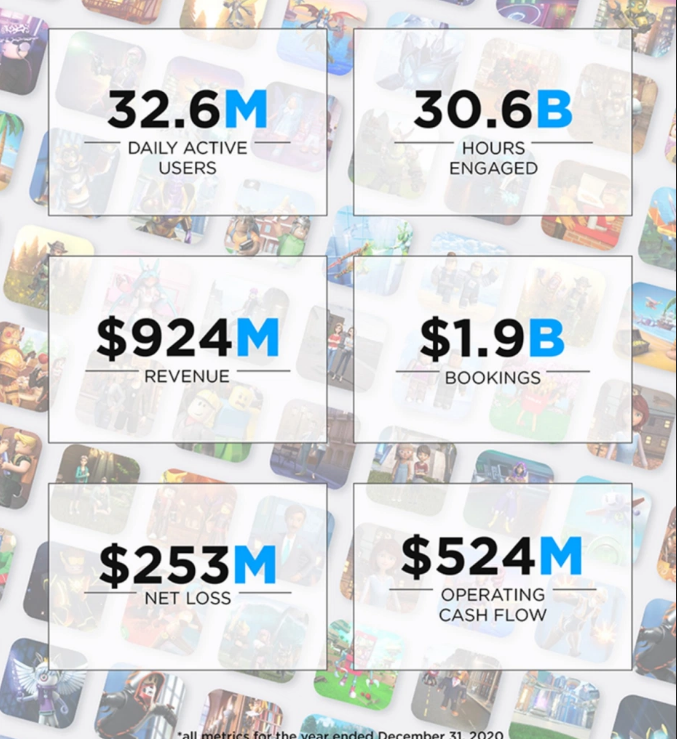 The gaming platform said recently that revenue for the year ended Dec. 31 grew 82% from the year-ago period to $923.9 million, while bookings—a key metric for the company—more than doubled to about $1.9 billion.

Additionally, the platform’s daily active users (DAUs), composed mainly by teens and preteens, soared by 85% last year to average 32.6 million. Those users spent 30.6 billion hours engaged on the platform, an increase of 124% year-over-year.

Still, Roblox is not yet profitable: losses widened to $253.3 million last year from the $71 million lost in 2019, due mostly to increased expenses in connection with its infrastructure, safety, sales, marketing, and research and development.

Looking ahead, the company expects its revenue to double in the first quarter of 2021, with DAUs forecast to rise 59% to 68% from last year's level.

After tumbling almost 10% last week, shares of Zoom Video Communications (NASDAQ: ZM ) look set to remain under pressure in the days ahead amid the ongoing impact of several negative factors plaguing the video-conferencing specialist.

Widely viewed as one of the biggest winners of the COVID-19 pandemic, Zoom shares have now pulled back nearly 43% since touching an all-time high of $588.84 on Oct. 19. Despite the recent selloff, the stock is still up approximately 195% in the last year.

Sentiment on the out-of-favor name has taken a hit as investors dumped tech shares which have rallied throughout the pandemic and rotated into cyclical stocks likely to benefit from the economy reopening.

That trend will probably continue in the week ahead, as more states across the country start to ease lockdowns and stay-at-home measures, considering the progress being made on the vaccine front.

Another cause for concern: Zoom reversed sharply lower last week despite releasing the best earnings report in its history, which saw the tech company score a year-over-year increase of 713% and 369% respectively in EPS and revenue.

After initially popping higher immediately following the release, ZM shares plunged amid the view that some of the tailwinds it has enjoyed from COVID-related restrictions will fade in the coming months as more employees return to working from offices.

Furthermore, Zoom’s technicals are signaling more selling pressure ahead after ZM shares closed below their key 200-day moving average for the first time since going public in Apr. 2019 as investors increasingly turn away from companies in the "stay-at-home" trade.